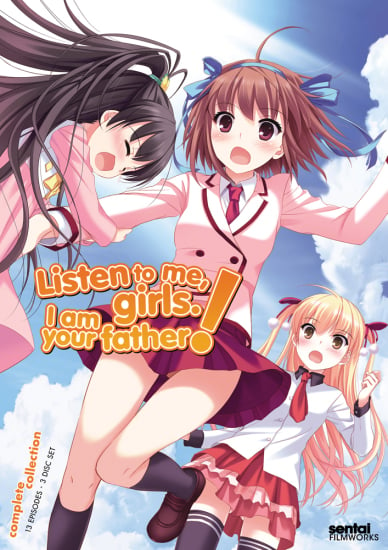 This anime is about an 18 year old college student who decides to take care of his sister's kids after she and her husband suddenly die in a plane crash. So he takes all three of the girls, the eldest of which is 14, to his one room student apartment and does the best he can to raise them, taking on several part time jobs and just trying in general to be there for them.  In my opinion it's a little less than average. The story isn't original and it isn't even plausible. It deals with a period of some months after the parents' accident and in that short period poor Yuuta is subject to one improbable misfortune and hardship after the other, while the more practical and common problems that would arise in such a situation are barely mentioned. As for the characters, they didn't do a terrible job in depicting them. I've seen worse. Yuuta isn't particulalrly memorable, but he's likeable enough. He's indebted to his sister who decided to raise him when their parents died, so he feels he should do the same for her kids to avoid them getting seperated - which is what the other more adult relatives wanted to do. He tries really hard and does the best he can. His motives are clear and also the attachment and affection he develops for the girls. He's kind of a foolish character as he doesn't seem aware at all of the responsibilities connected to raising such young girls on his own; but as I said, there's very little plausability to any of it. As for the girls, visually they are 3 incredibly cute loli characters. And their personality and feelings come across quite clearly. There's some depth to all three of them. Then you have Yuuta's fellow college student members of the RORI club to which most of the comic relief is delegated. So all considered, it's not that bad an anime. It made me laugh sometimes and it also moved me once or twice. There are better anime that deal with the same topic, like Aishteruze baby. And there's Usagi Drop, to which this anime can't even compare. But I wouldn't go so far as to say that it's crap and a total waste of time, as some other reviews I read. The message it wants to get across is the importance of family ties; and more in general of the ties between people and caring for each other: only one of the girls is Yuuta's niece, the other two are not related to him by blood as they are daughters of his brother in law's previous marriages. I'm mentioning this because I read some reviews where people seem shocked at the innuendoes of the relationship between Yuuta and the girls, especially the older one who has a crush on him. But honestly it's nothing particularly scandalous or offensive. And as for how the girls are portrayed visually, standard Japanese anime fan service. Nothing to get upset about. So really nothing special but not a complete waste of time either.

Story:What would you do if your sister passed away and left behind her daughter and her two step daughters? What would you do for them as a poor college student in a one room apartment? Would you offer to be their guardian and take up full responsibility for them or would you let the family split them up? Papa no Iukoto wo Kikinasai is about what happens when the MC Segawa Yuuta finds himself in this exact situation. When Yuuta was very young his own parents passed away ... and when his family tried to separate them from his sister she wouldn't allow it and said that she would raise Yuuta herself ... because there was nothing more important than keeping family together. When Yuuta finds himself watching the family discuss separating the girls he is reminded of what happened when his own parents passed away and how his sister had handled it ... and he found that he couldn't allow them to seperate the sisters ... so he tells them that although he is poor and lives in a small apartment they can live with him if they want ... and the girls ... who have just lost their parents and are horrified at the prospect of being separated ... gladly accept his offer. The plot was so sweet and heartwarming. You get to see how each of them make sacrifices so that they can be together and how they grow as individuals. Especially Yuuta who begins to understand his sister a lot better as he struggles to care for her three daughters whilst jugging school and work in between caring for the girls. Animation: The art was very well done and suited the anime perfectly. Sound: The soundtrack was very nice ... and the VA's did a great job! Characters: The characters were my favorite part ... the girls were each very different with Sora who was the far more serious one of the girls with a slight tsundere personality when it came to Yuuta ... she was always trying to care for her sisters as an elder sister is wont to do, whilst trying not to cause too much trouble for Yuuta who she had a crush on. Miu was a generally cheerful girl who seemed to always look for the bright spot in every situation ... she grows as a character as well not wanting to cause more trouble for her uncle she tries to care for her sister Hina whilst helping Sora and trying to save their uncle money where they could. Hina was a normal three year old girl who was a bundle of energy ... her personality would bring smiles to the others face and her presence tended to brighten the mood of others. Yuuta grows from a college student merely worried about what club he would join to a young man worried about whether he could give his nieces all of what they would need. He was such a selfless character. If I had been put in his situation I know I wouldn't have done what he did. I would have just taken responsibility for Hina ... since she was the only one related to Yuuta by blood. What he did ... was so far beyond what a normal person would do. I had nothing but respect for his character. Overall: All in all, I really enjoyed this heartwarming anime and I can see why so many people praise it!

Papa no lu Koto o Kikinasai! or, Papakiki or, Listen to Me, Girls. I am Your Father! is a rather heartwrenching anime. Not in the sense that you might think (although you wouldn't be far off), but that in the mood whiplash will absolutely kill you. One moment you'll be laughing, the next you'll be tilting your head in confusion, the next you'll be weeping, and the next moment you'll be cooing. The story is good overall, following the growth of the characters presented. Sadly, their personalities don't blossom too much, and most of the change happens later, with little overall effect. The changes and lead up scenes do, however, lead to a number of strong moments, especially in the semi-final episode. The final episode...well, I consider the semi-final episode to be the proper ending. The final episode, while not listed as such, is an OVA. It wraps things up rather well, leaving it open, but closes it just enough.  Considering that they worked with only two of the 12 volumes of source material, I feel they did well, and am now interested in reading the rest. The animation is decent, although not my favorite, and is rather 'cute' overall, with only a few barely noticeable skips. The music is rather well done, but the sountrack is rather small, most of the music repeating a lot. And when it's not, it's ussually a different iteration of the same song. Frankly, this would have scored higher for me had I not watched the second OVA. Touching at first, I was swiftly filled with.. irritation towards the end. Viewers beware. The first one, however, brought me to tears. 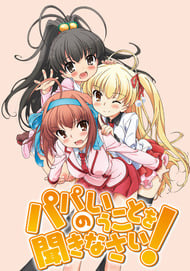 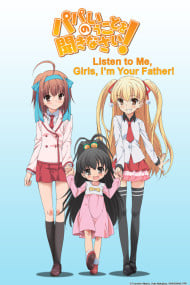 Listen to Me Girls, I'm Your Father! OVA 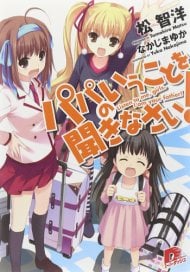 Listen to Me Girls, I'm Your Father! (Light Novel) 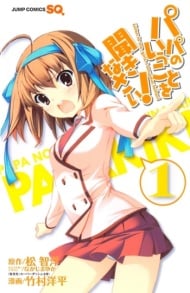 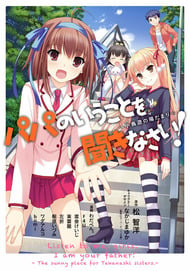 Listen to Me Girls, I'm Your Father! The sunny place for Takanashi sisters. 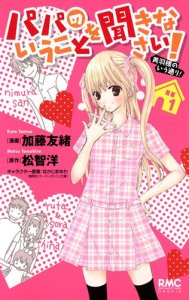 Listen to Me Girls, I'm Your Father! Miu-sama no Iu Toori 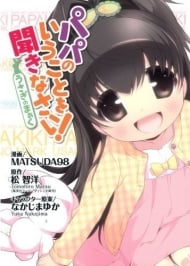 Listen to Me Girls, I'm Your Father! Usagi no Mark 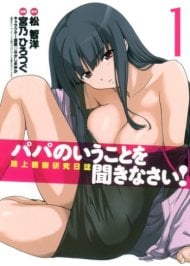 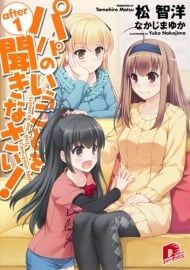 Listen to Me Girls, I'm Your Father! After (Light Novel)