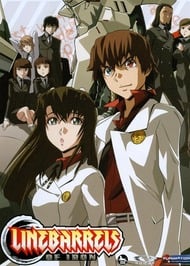 Many people have strong prejudice against mecha genre. It is supposedly shallow, cliche, boring and pointless. And despite how much it pains to me say it (since I actually like mecha genre)  - Kurogane no Linebarrel is the prime example of how pathetic mecha anime can get. Story - 4/10 Have you ever wondered how it would feel to get hit in the face with random, falling, giant robot? Well the main character can experience it first hand, since this is how the whole mess starts. A random, weak  guy suddenly gets killed by falling mecha, and since the hot chick piloting it feels guilty, she resurrects him by merging his life with the robot. Which obviously makes him the new pilot.  This premise sounds  like crap, but it actually is great, for a single reason - what do you suppose would happen if weak, bullied guy suddenly get immense power? That's right folks, he gets cocky, and starts dealing "his justice". He rampages, he goes berserk, he forces his own sense of what's right on everyone around him. For a moment I recollected Bokurano, where fighting in the middle of the city actually did cause some major damage. Yeah, this show should be awesome... unfortunately it all ends at ep 4. Yup, first 4 eps is just a crafty illusion, that makes you believe this show has potential for greatness. Once it's broken we are left with "Rookie pilot fighting agains evil invaders to protect, not to kill" kind of story. And so we have the secret organisation, that fights the invaders. Our hero gets carried away all the time, and is weak , but of course he have the greatest "anti-mecha-ultimate-asskicking-machine" so everyone spoils him. Then there are enemies  - a bunch of humans collaborating with the aliens, for some usual, uninteresting reasons. There is a last try to revive the show around ep 13-14, with unexpected twist. But  it soon gets back on his track towards nonsense.But our dear producers from Gonzo didn't leave at that. That would let the show be just mediocre - to achieve true failure, they needed to add something else. And that last component was the most obvious one - pointless fanservice. Yeah, our hero gets himself a nice harem of busty beauties  topped with a loli tsundere. And thanks to that they didn't need to try some weak stuff like "good execution of weak story", because they could just add beach episode and forget about the story. Animation 6/10Well... Some people says that it's "unique", i'ds say it's simply bad. The mecha designs, while certainly original, are really unappealing. The only machina I liked was the Vardant, thx to it's wings. Character designs are way too different from the CG employed for mechas, to a point that they don't seem to fit at all.  This type of drawing style could work if the robots looked like the ones from TTGL. Unfortunately they didn't. Despite it's flaws the animation manages to deliver on several occasions, hence 6 should be good enough score.Sound - 8/10I liked the opening a lot, it's really catchy. The music is done well, and voice acting stuff includes some of the top seiyus out there. Good job on that part.Character - 3/10 I still don't understand why they change a total win character into total loser. Kouichi have potential to be the one of the most bad-ass anti-heros in the whole genre. Instead he joins the large crowd of pathetic, nonsense spouting and completely typical heroes. He is the type of guy that first shouts that he will protect everyone, than gets smacked bad and go into self pity, after which he snaps and go berserk and in the end he suddenly happens to be the strongest and get the job done. If this show was a parody, such a character could work. But this show  isn't a parody...unfortunately.I excuse myself from portraying the rest of the cast, since they are so flat and shallow, that it just makes me sad. It looks to me as if producers bothered only to design characters as how they act now, but completely neglected giving them some real motivations , and some growth. Unless we call "using robot better" a  sign of character growing...Overall  - 4/10Errr... if you find pleasure in pain then be my guest, and go watch it. If not, than better give up this title. Or if you really feel like you need to watch it, then watch ep 1-4, and 13-14 - you will get the best parts of the show, without having to sit through the terrible rest.

Though I am new to the mecha genre and personally Its not a favorite genre of mine I did find this series rather enjoyable even if there were a lot of giant robot fights. So this is coming from someone who doesn't watch a lot of mecha. Story: 8/10 The story starts off where we meet our "hero" Kouichi Hayase a middle school pushover kid who gets picked on by bullies every single day to some points getting saved by his childhood friends; Yajima and Risako. On his way to run an errand for his fond bullies he gets in an accident and wakes up next to a naked girl who gives him the power of Linebarrel. Due to his new strength and power he becomes a cocky brat who uses that power to punish the bullies who picked on him. For the first six episodes its nothing but him abusing his new powers until he witnesses a death of someone close to him (Keeping it spoiler free as possible) which eventually leads him to JUDA an organization that fights for justice. Kouichi straightens up his act a bit making him a more bearble main character however he still has that cockyness to him its just not as bad. After some twists and turns towards the end of the series leads to enemies becoming allies to fight a greater evil. There were some episodes that broke away from the main plot where they were nothing but nonsense comedy however I thought it was a nice way to show some humor in the series. The only thing I really didn't care for the fanservice they threw in there and it seemed every girl in there had to kiss Kouichi at least once.  Animation: 9/10 Overall the animation was excellect there were some aspect where the animation was odd like how some of the noses were drawn and the twins hair I think could have been better bit those are some minor set backs for me. Sound 9/10 I thought the sound was excellent and the music for the series fitted nicely though at first I wasn't too sure about the opening song due to it reminded me of one of the Code Geass ending songs. Characters: 7/10 The characters were well rounded however I really didn't care for the fact that at least three of the females had a thing for Kouichi which leads to drama which pretty much breaks off from the main plot which I was most interested in didn't really care for him forming his own harem. The president of JUDA I enjoyed his character very much from how he ran things down to his practical jokes that eventually got Kouichi in trouble. He was one of those great comic relief characters in my opinion. Overall: 8/10 Well I gave it this rating since I think it was a great show. I still think other shows are better than it but I don't hate this anime. I think they were better off putting no fanservice in it because it was pointless and it just lead to pervy humor. Still think the story could have gone better but I still think it's a series to watch if you are a mecha fan. However, I am new to this genre so mecha fans may agree to disagree with me. 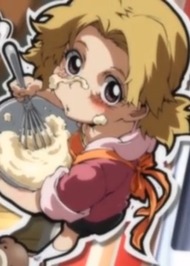 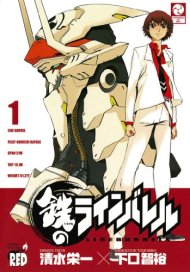