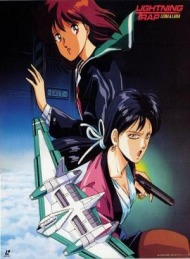 676 users are tracking this. Log in to see stats.

StoryNow, I'll freely admit that I've never seen anything anime that was related to a plane hijacking. So just for that, Lightning Trap should get some credit for originality. That being said, I didn't think it was presented in a very pleasing manner. First of all, the whole hijacking part, made watching it seem like a single episode of some sort of cop show. But then the whole "very dangerous super weapon/monsters" thing comes into play, and I feel detracted from the hijacking story. Choose one or the other, don't combine both! Because of the awkward combination of the two (with the weapon not being explained nearly enough, and only surfacing towards the end of the 45 minute OVA), this made for an equally as awkward viewing. So, while Lightning Trap does have a somewhat unique premise, it still lacks as far as the cohesion of both plots, and how well the characters fit together (see the characters section below). AnimationThe visuals are definitely not a highlight of Lightning Trap. With character designs and scenery very reminiscent of the 80s time period when this probably was made, it doesn't make for a very eye catching experience. Character designs have the trademark 80s pointed faces, with sometimes huge bangs and flat hair (mullet style, almost!), large oval eyes that look almost alien-like in appearance, etc. Nothing to scream about with the colors, either, with shades ranging from light lavender to dark orangish red (yikes), and everything in between. Skin color was especially ghost-like. I should say that some 80s/early 90s animation still manages to be impressive, despite the character designs. I think what made Lightning Trap so average was the combination of poor colors that weren't solid and vivid, and the strange character designs, even for that era. No CG was used at all. SoundFairly standard 80s "metal" music, sounding cheesy and old. This generally surfaced during the tense or fight/action scenes (not so many of these in the show). Quite a lot of the time, airplane noises or nothing dominated the sound waves. In general, nothing fantastic to rave about, although nothing horrible as well. Voice acting seemed to fit well with the roles. CharactersGenerally for 1-2 episode OVAs, I try to not judge on development, more on how well the characters fit their roles. And I must say, this was a failing point on all levels. First of all, as could be expected, there was NO character development. But even a step beyond that, we literally know NOTHING about the two main characters, except that one of them is a special agent. Well, and the fact that both are female. But seriously, there is nothing else we know about them, which makes them exceptionally shallow as characters. In addition, I felt their roles were really... weak. It just didn't feel right having two main characters, because neither of them really did much. If anything, the special agent character should have been the leading role, but because of the title, you assume there are in fact two roles. Granted, there is another character who ends up helping out to some extent, but not enough to be in the title, I think. I don't know, it's hard to explain, I just felt that the characters' roles were weak and thin, and uninspiring. OverallLightning Trap, while unique in its premise (with the hijacking, not the super weapon), still manages to disappoint. The animation is sub-par, the characters are paper thin, and the the story, once it gets to the weapon, is nothing to scream about. The rewatchability of this would be quite low -- I'd have no desire to watch it again. There just wasn't anything about it which stood out or made it anything more than what it is -- an average OVA. So, watch it if you'd like to see a good hijacking flick, which definitely IS unique for anime. Besides that, except it to be a very shallow, mindless watch, because you wont get any satisfaction from the characters, or any sort of depth on any level. 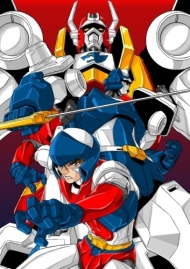 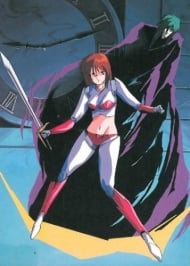 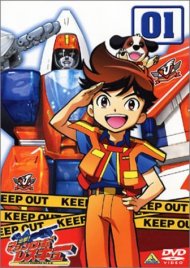