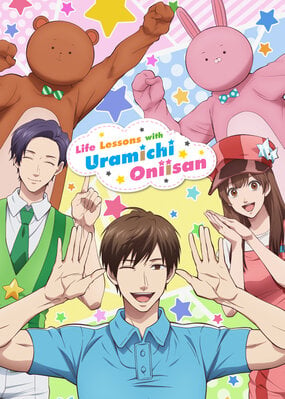 There are two things in our lives that are so scary that they might turn your life into a pure nightmare. And for you to understand how ferocious these two things are, it will take you 20 years from your birth to comprehend what I am about to say. These things are: adulthood and children. Uramichi Omota is a 31-year-old man, who is a super star of a TV show called 'Together With Mama,' an educational show for kids. He used to be a professional gymnast, gifted with a strong physique, amazing looks that no girl can resist; there is nothing, he does not have, or so it may seem. Uramichi needs to wear a mask of the always happy 'brother Uramichi,' who cannot be upset. On top of that, the sole idea that it is highly likely that he is going to be a star for a kid show for the rest of his career, is somewhat unbearable for him. Uramichi Oniisan is a dark comedy that shows how painful adulthood truly is. It has been a long while, since I laughed so much. Uramichi Oniisan is a very unique comedy that offers the viewer a look at the world of children entertainment. Uramichi, as mentioned above, is a super star of a TV show called 'Together With Mama,’ an educational show for kids. While he should be happy that he has a work, he does not find it as enjoyable, because every day he realizes that his past dreams will never become a reality. Uramichi used to be a gymnast, however, such a job is very demanding. Uramichi should be glad, indeed: he has now a different work and it is not that bad and not as demanding. Or so you might think. To entertain children you should always wear a mask of an always joyful person that will remain like that no matter what might happen to them, which is, let us say, not that easy to do. On top of that, sometimes kids’ questions are nearly impossible to answer. That said, Uramichi Oniisan revolves around Omota Uramichi, as well as other stars of the children show that used to have huge dreams, but are now super stars of something, they could have never imagined they would be a part of. This is a pure gem and is something I think some people will not understand. Uramichi Oniisan is a very realistic story that you might be able to relate to. The whole show is perfectly well-made: from the animation (which is very important, because it shows characters’ emotions), to the dialogues, which are just something you must see yourself. If you are an adult: mentally or physically and like great comedies, you must watch Uramichi Oniisan.

Life Lessons with Uramichi Oniisan is actually a very relatable show. We follow 31-year-old Uramichi Omota, a former professional gymnast who works on a kids' show called Together with Maman and the host of the exercise segment. However, despite his upbeat personality and smile, off-camera, he is a deeply depressed, mentally unstable man going through the harshness of adult life. I am sure that as we all get older, we have had some big aspirations and goals in life that we hoped to accomplish out of a childish belief only to be confronted by the realization that adult life is not that cracked up to be where you get the urge of being a child again due to you having more freedom and not having to do things like paying the bills; work excruciating hours oftentimes being underappreciated. The animation reflects that. While Together with Maman paints a world that is bright and idealistic, it is contrasted with the actors' actual mental states being dark and somber. The humor's pretty unique largely from the characters having existential crises once per episode. However, the way that the anime was adapted from the manga tends to ruin the setup of some jokes. One instance of this is when Usahara was saying that Uramichi's apartment would have dumbbells littering the floor...but that was after the punchline of Usahara hurting himself by accidentally hitting his foot on a dumbbell. That being said, the humor is very much subjective because it can come off as cringe-inducing. Really, the show is actually hard to watch sometimes because of how hard it hits with the bitterness. Uramichi is a pretty complex character. While he is depressed constantly with his mental state being concerning, it is shown that he does actually love his job and genuinely wants to be a role model that children can look up to. Really, it's his care for the child audience that gives him some motivation to keep going even when it means having to fake it till he makes it. The other characters are more one-note: you have Usahara one of Uramichi's former upperclassmen from college. Usahara is best described as the one friend that the group does not like. His fatal flaw is his brutal honesty: he would recklessly say whatever was on his mind not understanding that it would be something that others would not want to hear. He is someone who wants a girlfriend and constantly blows his money on useless stuff. The main gag is that he is often on the receiving end of Uramichi's abuse, or he is assaulted by the show's choreographer...though that one is more problematic because I don't know if they are meant to be a camp man or transgender because if it's the latter...it comes off as perpetuating stereotypes. Kumatani is a stoic man who makes snarky remarks to other cast members, but for the most part, he lacks any noteworthy quirks. But I will give him credit where it is due: what he does to the director in episode 10 is cathartic. Much like Usahara, Kumtani also wears an animal costume. He is the bear whereas Usahara is the rabbit. Iketuru and Utano are the "singing senpai" pair: Iketuru is probably the most naive and simple-minded of the cast and the most childish. But he is also well-meaning that you cannot help but want to protecc. Utano's main quirks are her obsession with wanting to get married and her constant mood swings. She also had a failed comedian as a boyfriend who she'd rant about sometimes. But unlike maybe Kumatani, she receives the least amount of character development aside from her wish for her boyfriend to propose already. The opening and ending themes are also great with the first film setting up the energetic facade that is Together with Maman while the ending is more direct about the cast's actual feelings. Overall, if you are a fan of cringe comedy or characters having existential crises, then I'd recommend it.

Thanks this anime I realised what does "comfort anime" means. I really can't imagine my life without Uramichi Oniisan right now. The last episode was the best last episode in the world! But not just the last episode was so incredible...It isn't anime for everyone for sure. But if you like dark humour, sarcasm and little bit psycho things and people, you will love this anime. It hasn't a main plot, it's just about some stories from daily life, so some episodes are similar, but every episode still has something so special and some new perfect thoughts, so you won't be bored. The characters are chapter itself. Everyone have so interesting thoughts and some character thing what just makes them, who they are. For the end I wanna say, that Life Lessons with Uramichi Oniisan is really original in every way and it gave so many things to think about and it motivated me, so If you are looking for some anime like this and Uramichi interested you, you should't hesitate and going to watch it! 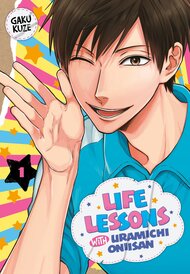