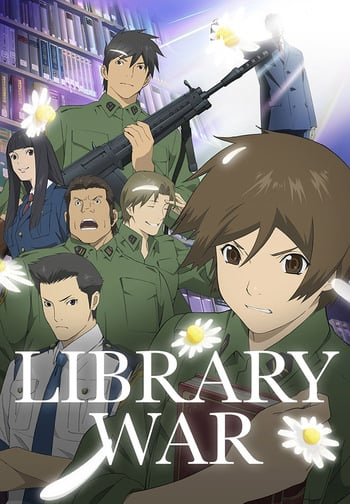 The Katjvarna Empire and the Kioka Republic are at war, and Katjvarna is currently defending their border against Kioka's attacks. Yatorishino is from an influential family in the empire, and she's taking the high ranking officer exams. To make sure she passes at the top, she's convinced lazy, anti-war, girl-crazy Ikuta to take the exams as well and help her, in exchange for a favor from her family. The first, written test goes as planned, and then they head off on a boat for the next. Unfortunately, the boat sinks, and Yatorishino, Ikuta, some other examinees, and a mysterious, important little girl are stranded behind enemy lines!

After successfully sneaking in the drug trafficking base and getting the target list, cheng gang, one of the chinese special forces, got ambushed and his partner sacrificed in order to cover his retreat. Later he found he became the wanted in China who stole the cultural relic the Flower Crown…to investigate the whole thing and clear himself, he disguised as Zhang Cheng and joined Huaxing, a drug trafficking group in Thailand, in a new identity. Although Zhang Cheng did not get the consent of his superiors, he still risked a huge risk as a "ownerless" undercover, lurking in Huaxing...

Wars leech the life out of a country in so many ways.  They consume lives and resources at an incredible rate, but what is worst is the way they eat away at hope.  The Empire, which has survived the years of war, now finds itself with a new conflict to resolve: with the exception of the noble families that managed to hold their wealth during the struggle, its populace is made up of starving citizens and war-damaged soldiers.  Section III of the army of the Empire was created to deal with this ongoing problem; however, their progress was been slow on all fronts.  The citizens fear and distrust them due to their experiences with other soldiers, the nobles have no use for them, and the other branches of the military mock them for the ineffectual nature.  LT. Alice L. Malvin of Section III Pumpkin Scissors won't be defeated, though, even if her newest recruit does have something unusual about him.

When an unknown Arm Slave surfaces somewhere in the Taiwan Strait near mainland China, MITHRIL orders Melissa Mao and her team to go into a divided Hong Kong to investigate the perpetrator of the unknown Arm Slave. As the team continues to check into the reports of the unknown Arm Slave, the culprit is believed to be a potential SRT recruit back from Sousuke's training days in Belize when he was not recruited by MITHRIL.

Kyuno, who's aiming to become a Sister, just became a Sister-in-training, and started her dormitory life with Ginger and Alicia, aiming to be the same, however...

By the time he realized it, Wallace, The head librarian of the "Library of the End", had no memory. And what lies inside the forgotten library in the furthest end of the world are only a taciturn maid and "The Magic Monsters of the Books" that he just can't get through. And then, one day. He met Lucia, a witch apprentice from the village of the beginning, through a mirror. In order to save the world from the slowly encroaching demon lord, Lucia travels together with the hero who appeared in the village of the beginning. As Wallace is supporting Lucia from the shadows, he comes to realize that his past memory is the key to defeat the demon lord.