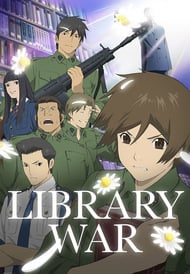 The government has passed the Media Betterment Act, establishing a military police force to stop the spread of "negative influences harmful to society;" and in response, libraries have organized their own military units to protect freedom of expression. After being saved by a Library Defense Force agent in a bookstore, Kasahara is inspired to enlist in the Library Defense Force. Although she proves quite athletic and capable, she must endure the harsh but meaningful training of her instructor and superior officer, Doujou. As she learns how to be a good soldier, she participates in LDF operations, helping protect literary freedom for everyone.

My Prince Is In The Library Force

The Battle To Defend Odawara

The Library Force Will Not Fire

The Man Behind The Curtain Is Satoshi Tezuka

Who Is The Library For?

Animated by Studio I.G. which means it’s going to have amazing science fiction overtones… What the heck, it doesn’t? And it’s a romantic comedy to boot??? Man, these guys are out of their league for trying to pull something good out of this. And the show is directed by the guy who did Prince of Tennis! Ok, I guess the premise is over the top here as well (Books are serious bizness!) but it seems like we are heading for the rule of cool and not because the story seems interesting. And I mean it does sound interesting; 90% of the people who decided to watch the show was because of the description. “Many books are banned and libraries now have armies in order to protect them.” Don’t you just want to find out what this is all about? Doesn’t it sound familiar to Fahrenheit 451? Isn’t it relevant to the recent Act Japan voted in order to censor several works of fiction? Isn’t this a social-political heavy story around law-given liberties?And the answer is no, it isn’t; it is just an excuse to place the main characters in a situation where they need to team together for the same goal. The whole premise is handled very lightly, it is hardly exploited beyond the obvious, and it is usually thrown aside for comedy and romance. In effect, it is just a lure to watch a romance with a pretext. And before you think of anything else YES IT WORKS! Romances work fine as long as they have something other than high schools (gah, how I hate those) and the characters have some sort of goal or objective that keeps them together (other than being forced to go to the same school every day that is and study hard to pass in the same college). So there you go, this time it is in libraries, and they are armed and trained to defend the bookshelves from opposing oppressors of free thought or something. As I said, it is just a cool premise; nothing too violent or important ever happens and it is mostly stereotypical comedy and romance. Which is just fine if you realize the target audience is GIRLS and not BOYS despite being tagged with a seinen demographic. And thus you get some clutz girl who pretends to be dynamic but keeps being in need for some hunk to save here from pretty much everything in a most non-violent and romantic way. I mean, ok, there is action too, but it is cartoony and aimed at destroying books and not at killing or injuring people. For the same reason, you must love books or be a strong supporter of liberties, or even the premise won’t work and the whole thing will backfire as being completely stupid. A WAR FOR BOOKS? And since it never tries to be serious or delves deep into politics and morals, it is nothing more that a generic excuse for the story to exist and to lure in the bookworm audience. It worked for Inkheart, so why not here as well? Well, it’s still an almost standard shoujo fare if you check out all the important characters. The dynamic female protagonist who is otherwise frail and in constant need of her super handsome commander… and some others. Yup, it is basically a two-character show with the rest flavouring it with silly action and goofy comedy. It works to place everything in a context (other that goddamn schools) and to have a theme while everything unfolds predictably but also nicely and end rather satisfactory after 12 episodes. It is still very basic as a whole, and all secondary characters are left undeveloped and always easily acknowledged as either good (supporters of books) or bad (Nazi-wannabies and trashers of the former). It would be really cool to see some reasoning behind the baddies and some actual political implications but NAH nothing of the sort happens.I leave for last the production values which are nothing much in terms of background details or cinematics. To the most part everything looks ok and the crossfire scenes lack tragedy or excitement for being light and bloodless. There are also no exceptional music pieces or memorable voice action, and the comedy is almost ever-present to make things appear even more simplistic with deformity and cartoony violence. So as a whole it is not a great show but if you get past the stupid logic of WAR FOR BOOKS then you get a nice time waster. But nothing more. I prefer my wars with blood spilling, lives lost, and people screaming.

There are some animes where you feel like the runtime was way too short. Library Wars is one of those, and its not just for the viewer's pleasure that this anime needs more episodes. The 12 episodes were insufficient in really developing the characters and showing the awesome storyline that this anime had going for it. As a result, the start of the anime was too rushed and it felt like viewers were thrown right into the heat of things without much prologue. It also diminished any opportunity to feel for the characters because viewers have yet to warm up to them. That being said, this is a splendid anime that tackles future governmental reign and possible societal clashes that can happen. It is a wonderful story that adds romance, comedy at the right parts to this military centric show.  The characters all had their own personality and it really (kind of) depicted how military life is like to a little extent (minus the love life and overly friendly superior). Definitely a recommended show to watch for any form of genre lovers. 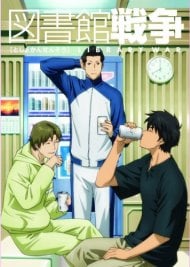 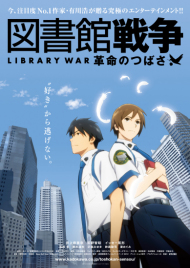 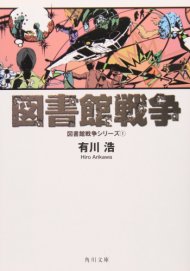 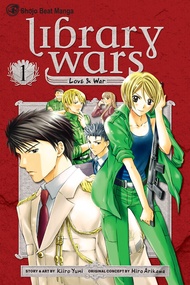 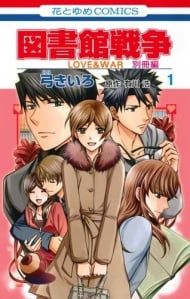