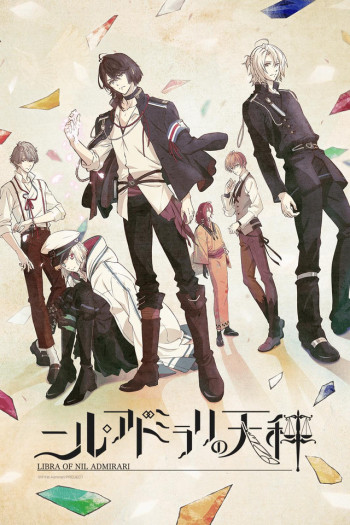 So I will echo the previous statements; when I first started this series, it was typical reverse harem lackluster...

Then the twists kept coming.

The twists were so good that they bumped the series from a low 4 to a solid 8.

The twists are that good and that tight. What was good good about them is that they were all in plain sight. If you rewatched the series, you will surely see them, but that's how engrossed you will get. I mean...they went so far as to hint what started WW2, but I won't spoil that.

This is one of those 'Gotcha' anime series that you will talk about because the writing was completely cloak and dagger. You walk in thinking...okay, pretty bois mixed with helpless noble chick but you leave with a huge...WTF did I just watch?! Hang on until Episode 8. It's worth it.

I tried to watch 2 to 3 episodes of this series hoping that I can find good reasons to continue watching it but I failed. I remembered the other series which has the similar theme like this except that characters in that series were actually singing. I am talking about Dance with Devils. The moment I saw the opening theme I remembered Dance with Devils and there I got a hint that "Oh no! Another reverse harem with nonsense story". I tried my best to continue watching it, believe me, I really tried but I gave up. The animation is good. I like the way that the story is set in a noble era but what I don't like is that the characters were all predictable. I already knew that the MC will end up with that black-haired guy. I am just hoping that maybe there will be some turn of events but there was none. If you would like to give it a try, nothing is bad about that. But also considers some of your precious time.

This is a cute anime, definitely some unexpected twists, though they make sense later on. I enjoyed the animation, it was made very well. The quality of sound was great from where I watched it from, though I'm sure there are copies that sub-par. It's not English dubbed, it was Japanese with English subtitles.

The characters were well made, though in the beginning you are left wondering why some characters are underrated or overlooked, but as the story goes on, you realize why the characters development was done the way it was. It makes sense if you watch it all the way through. Which if you play the game, I'm sure there is much more depth to the story and the characters. Though, from what I've read, the anime closely follows the first PS Vita game (the game has a sequel). I am going to read the manga adaption as well, to see how it compares.

The intro to the anime is very catchy, and the ending theme alternates between two different kinds, which I found odd. My one pet-peeve though is, when drawing males, they should also have nipples. Though, that is pet-peeve for my Japanese dipictions of the male pectorals. In one of the ending themes, you'll see what I mean.

Overall, I would still give this one a 10/10, even with the story being an 8/10. I definitely enjoyed watching it, I would highly recommend it. Once I get a PS Vita, I'll play the game too to see how it compares that way as well.

I really liked the premise of this story, not to mention the abundance of beautiful men. The animation was great and many of the characters were lovable (I especially had a large amount of respect for Tokinomiya). My only problem with this particular show is the subplots. Nothing was wrong with their contents, it was only the fact that it felt like they would often get paused, not mentioned at all for a few episodes and then suddenly brought back. That kind of inconsistency didn't sit well with me. Also, I would have liked to see the characters explored in more depth, which it wasn’t, though, I understand it. That kind of thing is very common in this kind of short, otome based, reverse haram animes, so it didn't particularly surprise me nor did it especially bother me too much. Overall, I'd say this anime is a nice, short watch for people who enjoy this kind of thing (myself included) and for those who aren’t looking for anything particularly amazing.

I loved the story, and the way tsugumi was. In other Reverse harem animes, if a guy would have asked the girl to have a relationship like the bookowner did in this one, she would have had a really insecure attitude. I loved how Tsugumi just straight up answered that she is not interested. Baha. The love interests are good in both their personality and looks;).