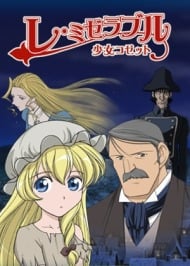 As a die-hard, French-speaking fan of Les Miserables, I was obviously immediately drawn to 'Les Miserables: Shoujo Cosette', and proceeded to spend about three days doing nothing but watching it. Although I am an absolute purist when it comes to most forms of literature and I believe that everyone who enjoyed the musical version of Les Mis should go and read the book to get a proper feel for the story, and though I am usually dubious about anime adaptions of pretty much all Western stories, I was rather pleased by 'Shoujo Cosette'.  First, the story. Most adaptations of Les Mis focus around the Jean Valjean/Javert story, but this version centred almost completely around Cosette. That's not to say, however, that other characters became unimportant, but I'll touch on that when I get to it. The story was rather close to the original novel, including pieces that happened in the novel but weren't in the musical, turning Cosette into a more 2-D character than most other adaptions. The story was long enough for the audience to get attached to the characters, and you do kind of wince when Mme Thernardier is beating Cosette with a broom (albeit off-screen), but there are other elements of the story that were a little irritating. For example, why is it that all anime producers feel the need to put in cute puppies? Although Chou Chou the dog was cute, it was unnecessary to the plot, and wasn't in the original. Some parts of the story, especially early on, do come across as filler if you haven't read the book (a lot of which feels like filler) but the action really does pick up, and the plot develops in almost every episode. I have come across a couple of criticisms that said that 'Shoujo Cosette' toned down the adult themes of Les Mis; yes, it did. Fantine never becomes a prostitute, and a couple of characters don't die, but it didn't affect the plot too horribly. I feel a little bit ambivalent about the changes made in this adaptation, and I'm not sure that it conveyed the very serious subject matter in absolutely the correct way, but it was mostly adequate.   The animation was pretty typical, especially at first glance. Typical big anime eyes, typical solid-block colours, typical unrealistic hair. Then I looked again; some of the character designs are actually quite stunning (looking at you, Enjolras) and the backgrounds and attention to detail are fantastic. I don't know much about animation, but this show was very aesthetically pleasing. English is my first language, but I also speak French fluently. As a result, the attempts of the seiyuu to pronounce various French words and names was quite painful. 'Fleur' was particularly memorable. My Japanese is of the standard that I can pretty much tell what is going on without a lot of dependance on subtitles, but I found I had to read the subtitles just to work out who was who because I didn't understand their attempts at French. Mostly it was just names (Cosette becomes Koh-Zeht-To, Valjean becomes Ba-Lu-Jo-N), but one episode when Cosette and Gavroche were learning to read was really painful. The music was stunning. The opening and closing themes were gentle and fit well, and the piano music set to certain scenes was so pretty. It wasn't particularly memorable, but it was nice. The characters were arguably the best part of 'Shoujo Cosette'. As I mentioned before, most versions of 'Les Miserables' focus on Jean Valjean, who, in 'Shoujo Cosette' comes across as the most lovely, kind, generous, nice and wonderful person to ever walk the Earth. This is pretty much completely in character according to the book, so I won't complain. Cosette, the main focus of this version, is actually a well-fleshed out character. When I orginally saw the stage musical, I didn't really get why Marius would choose Cosette over Eponine; Cosette was very 2-dimensional, boring and generic, whereas Eponine actually had a personality, even if it was somewhat...stalkerish. Even so, the anime gave Cosette a better personality, though it stuck pretty well to the book. Eponine was also pretty much perfect, starting out as the irrationally jealous and greedy girl, morphing into the less-greedy yet still kind of jealous girl who redeems herself via death and is one of the characters who still manages to die. Javert's characterisation was pretty much on, although he didn't have the same kind of absolute overwhelming obsession with catching Jean Valjean that came through in some productions, possibly because it was more about Cosette. To spoil it for you, in the musical and the book, after Javert's life is spared by Valjean, he kills himself. In the anime, he doesn't. Although I preferred it when he did kill himself (probably because it fits with the story's overwhelming kill-em-all attitude), it wasn't really unsatisfying. I though the characterisation of most of the characters was accurate and effective, and their character designs were all pretty excellent. My only criticism would be that evil characters, like the Thenardiers, were so obviously evil from how they looked that you wanted to shout at Fantine not to leave Cosette with them because it was so obvious they were crooks! And certain characters (i.e. Javert) didn't seem to age, but that was possibly just the art style.  Overall, if you liked 'Les Miserables' but wanted to see what it would be like if a bunch of Japanese guys got their hands on it, this is the show for you. If you can bear with the almost childlike character designs (we don't need to be shown who is evil through appearance! We can deduce that from their words and actions!) and the awful French (even if you don't speak French it still sounds abysmal), you'll like this. It sticks close to the original story, characters are more interesting than in the musical, and it still has some tear-jerking moments in it. Go ahead and watch it!

The Anime Adaption for the classic story brings new life to the tale, and a fresh twist on several aspects which i will not spoil makes this adaptation of Les Miserable an excellent Anime 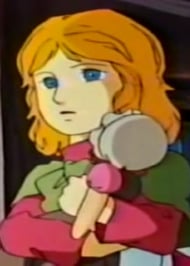