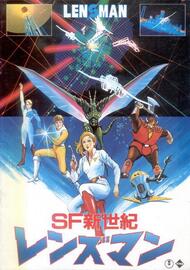 StoryIt's easy to see why fans of the classic series of novels - which essentially founded the genre of space opera - dislike this film. It takes the concept of the Lens, which sort of makes sense in the novels, arbitrarily breaks the rules as to how it works (and confesses to doing so); gives an offhand reference to the power being drawn from the 'Arisians' that is never really explained; and just uses it as a handy plot convenience for some 1980s lightshow that wraps everything up. The plot of this space epic is fairly episodic and fitfully interesting - our heroes fight Boskones, escape, arrive on a new planet, see weird things, fight Boskones, escape. Some of the set-pieces can be genuinely exciting, though I could have done without the alien miner disco. Essentially, as an excuse to string things along, the narrative works just fine if you turn your brain off and enjoy a somewhat bumpy ride. I'd be more forgiving if I felt the pace flowed better, but it doesn't - it kind of meanders at first on the disco planet, and resolving the conflict through arbitrary plot magic robs the finale of any tension.AnimationThe animation is a strong point that has aged rather well. The action sequences are fluid and exciting, full of explosions, movement, lasers, explosions, high-speed chases, and did I mention EXPLOSIONS? Because there's a lot of them. This is the level of competence one expects from director Yoshiaki Kawajiri, famous for Ninja Scroll and works of that ilk. Due to the sanitised nature of the material he can never indulge in the levels of gore he's known for, but the action sequences are occasionally exciting. Not in all cases, but there are one or two that stand out. Beyond that, there's good design work. The spaceships of the Galactic Patrol, a rickety Millenium Falcon-esque civilian ship, and the weird, organic vessels of the Boskones are all well realised. Only some of the planets are breathtaking but generally they're at least decently designed.  Some great alien designs are featured here as well - the various goofy Boskones themselves, assorted alien miners, weird tentacle things, and of course a Pterodactyl-alien who aids our heroes. Yes, a humanoid pterodactyl with the superpowers of the Lens. Cool by default. My biggest criticism of the animation would be the CGI, which is minor as most of the film is standard animation. This is nowhere near as poorly done as Golgo 13: The Professional - CG is used sparingly and mostly confined to spaceships, looking a lot like a very old videogame. Plus, no attempt is made to integrate the computer animation to the two-dimensional material. Not high praise, but it's certainly one of the better earlier efforts I've seen - at least as far as the spaceships are concerned. What is more annoying is the gaudy eighties CGI lightshow that accompanies the power of the Lens, which has ample cheese factor and looks pretty ugly.SoundThere's little music in Lensman and what is present is unremarkable. I was rather surprised, given that this is a pretty old film, that a Japanese insert song was included in the English dub, so I assume that it by and large wasn't tampered with from the original. The voice actors are decent and acquit themselves well - I really have no complaints and no praise.CharactersA rather unremarkable menagerie, even by Kawajiri standards. You have a bland teenager who naturally gets the special powers, you have the irritating old man he's fond of and an undeveloped woman who exists, it seems, mainly to be grabbed by tentacles on two separate occasions. Will she fall for the boy without having any meaningful conversations and merely because they've hung around each other as stuff blew up? You'll have to watch the movie to find out! There's also a comical alien sidekick who isn't that funny, interchangeable Boskone adversaries and a sea of generic Galactic Patrolmen, among others. That Pterodatcyl alien may not get any personality either, but honestly, he doesn't need to - if you don't understand yet what makes him so fundamentally cool I can only assume you've never been six. Forget Ninja Scroll 2 - Kawajiri needs to make a sequel to Lensman just about this guy flying around exotic alien landscapes and ripping off Arzach.OverallLensman never needed to be substantial to be good - it just needed to be a wild ride from start to finish. The animation is good enough and this goal is achieved on occasion, but overall these efforts are botched with a weak story that isn't well paced. That no real effort is made to make us care about the characters doesn't help either. Granted, I'm not much of a fan of Kawajiri even when he's supposedly good. I consider the pacing issue a common flaw of most of his films - either Vampire Hunter D film would threaten to put me to sleep on a repeat viewing. So if you're a fan of his you may enjoy this picture a lot more than I did. Fans of the novels are warned that the baby is thrown out with the bathwater in this rather loose adaptation. Ultimately I found Lensman decent and I enjoyed it in parts. If you want to see what happens when Star Wars and Ninja Scroll collide to produce something not as good as either, check out this movie.

The main character is given an overpowered watch that's fused with his hand. He doesn't know how to work it yet flaunts it about, feeling special but he's truly just another cliché (or maybe it wasn't such an overused character type in the 80s when space operas were just beginning?). His and everyone else's development is nonexistent. The story felt too perfect - not enough struggle to win the fights against the alien ships who had better and stronger technology than the humans. Also, cheesey puns (the kind superheros would say in old comic books) and side commentary ruined the few fights that I could have almost taken seriously. Other than that it's simply a good vs. evil tale not worth the watch unless you have some prior connection with it's cast. 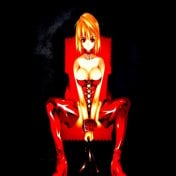 A young man aims to do something more exciting than farming. His homeland is destroyed by an evil Galactic enemy and he is given super-human powers by which to save the galaxy. His comrades are a sarcastic, hairy alien and a beautiful female in white with a braided bun on the side of her head. Do you recognize any similarities here to an American pop culture icon? This mid 80′s film has aged pretty well, excepting the CGI which was laughable (though not as laughable as Golgo 13.) I had fun just watching and picking up stolen Star Wars references with a Japanese twist (tentacles!) If you aren’t a Star Wars fan, enjoy a decent sci-fi story and the miners’ disco. 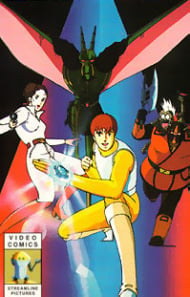 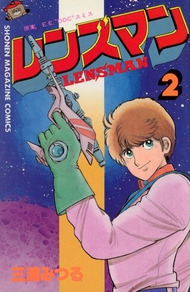