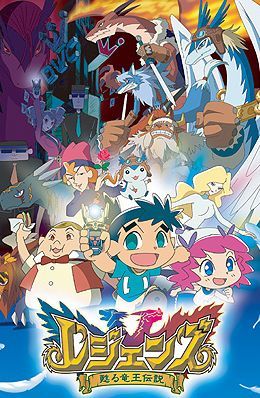 Without looking at the fact the Anime is over 8 years old, its still very normal. not too special and not too good. The story was a good idea, but WAY much too dramatic. At much points you could cry, but you dont because you know the whole anime is dramatic. but at least 20% of the whole Anime just contained views to older mostly dramatic parts of the Anime :) Ironically meant* the idea about a big war between Evil Legendz and Good Legendz and the DWC is too old, existed before already, so it isnt something new. a lot of parts where i thought "why did they build it in?" or "why did they even added this?". The beginning was pretty cool, but the fun watching it decreased slowly to the end, because it wasnt really the same like before, it seemed it was like a different one, or maybe a new season.

The Animation is good, for an old Anime pretty good, but because i watch it now, i can just say its medium. while i watched it i noticed a lot of short freezed screens, and sometimes Frames just repeated. maybe it was the site where i watched it, but maybe not.

About sound i cant say that much, but a lot of sounds was the same even for different actions. Also the music would fit better in a game, not in an anime.

The Characters was funny and cool in one, i liked Shiron most. all other was Cool, in exception of some others, which was mostly annoying or dramatic all the time. the Design of the characters was mostly creative, Some of them could need an overwork.

All in one its a good Anime with some up and downs. For Anime Fans still worth watching. More or less its fun watching it, even yet.