Legend of the Millennium Dragon - Reviews 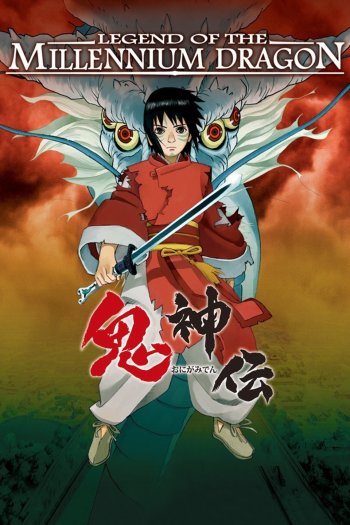 I watched this film as part of Anime-Planet's 2020 Secret Santa. If you are reading this Secret Santa, do not take the following review personally. I was happy to participate and receive your picks, regardless of what my personal opinion of them may be.

My immediate impression was that this film looks very much like Naruto visually, with the addition of more background art and cg elements.

The oni are very strange to look at. They have a foggy, blurry effect that makes it feel like my resolution just dropped in quality. I notice they do not look as bad when standing still. It may have been experimental for the studio at the time, but it has not aged well and frankly does the film a disservice.

Many of the characters have strange looking man faces. It especially stands out on children.

The film was pretty heavy on Japanese history. It makes reference to old wars, eras, locations, and folklore. Without having that cultural knowledge or background, this aspect of the film mostly flew over my head.

A key part of this film is time travel, which I am not a fan of. When time travel is involved, the plot tends to cancel itself, making nothing feel meaningful. They said only a member of a certain family has the power they need, but with time travel, why this kid? How is he the last one of his kind? That would imply that he has no parents or children, because apparently no one is related to him. With time travel, you could theoretically pick up the same person over and over again if you just pick them up a little prior to when you did the last time. What's to stop them from time traveling again and again, restarting everything in an endless loop?

Regarding the villain of the film, why is this the one and only guy to have super powers? They are a god among men. The film leans towards the supernatural, but no one can do what they do.

I did like the music, but there wasn't much of it.

Towards the end of the film, the villain wasn't even trying to hide it anymore. I liked it better when the boy didn't know who to trust. I'm not sure what the villain's motive even was, probably just mass expansionism. The film had a subtle commentary on natural preservation, but when the boy returned home, society and the city looked exactly the same so did it really matter?

The protagonist was boring and their powers were purely emotionally driven. They didn't do anything unique to themselves. It's like the movie just needed his fingerprint, not him. When a situation seemed close, they screamed and it solved itself.

I did like the ending photo. It was sweet and managed to feel like a cap to the bizarre events with a final goodbye to their isekai friends.