Legend of the Galactic Heroes: Die Neue These Second 3 - Recommendations 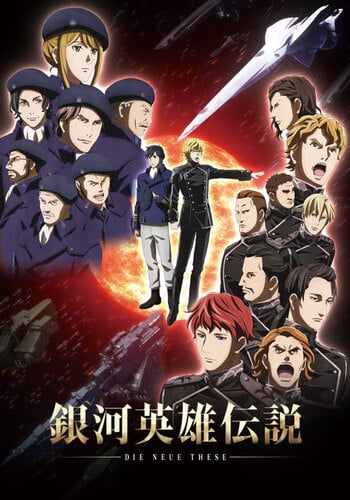 If you're looking for anime similar to Legend of the Galactic Heroes: Die Neue These Second 3, you might like these titles.

In the year 2060, eight year old Dorothy and her dog are mysteriously swept off their planet into the wonderful, magical Galaxy of Oz. An evil witch, Gloomhilda, once ruled the Galaxy through fear and terror but was driven out by the good Dr. Oz. Now, Gloomhilda has amassed an army on the outskirts of the Galaxy and is preparing to win back her empire. Her sneak attack fails due to Dorothy's unexpected arrival. However, Dr. Oz knows Gloomhilda will return. He has a plan which will free the Galaxy of the wickedness of Gloomhilda forever. Legend tells of three magical crystals, the Crystal of Love, the Crystal of Wisdom, and the Crystal of Courage. These crystals were spread throughout the Galaxy and lost hundreds of years ago. According to the legend, whoever possesses all three crystals will rule the Galaxy of Oz for all Eternity. Under the guidance of Dr. Oz, Dorothy and an assortment of "heroes" set out to scour the Galaxy in search of the three magical crystals.

Curtis Newton, aka Captain Future, is an orphan. His parents died in their artificial satellite while he was an infant. His father was a scientist, who has abandoned earth for the satellite to dedicate his life for science along with his aging friend the genius Dr Simon Wright. Wright senses his death, and decides to implant his brain in a mechanical container. They both manufactured a superior robot and an android. Captain future dedicated his life to fight evil along with his three men, the brain, android, and robot.