Legend of the Forest 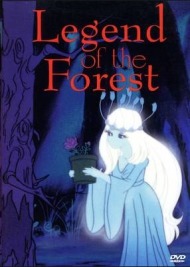 Set to Tchaikovsky's Fourth Symphony, Legend of the Forest is a voiceless tale of human encroachment into the forests and its furry and feathered inhabitants. With only a chainsaw, one man will destroy families and lives for his own selfish gain, and the citizens of the forest will never be the same. Join the varied cast of birds, trees, squirrels, gnomes and fairy folk as they struggle to survive in their dying homeland...

StoryLegend of the Forest is cleverly focused on the same topic as its title: the forest. Produced by the famous Osamu Tezuka in the late 80s, this 30 minute movie (which has a few definite sections) is voiceless and is basically a good old "here's why humans and the environment don't mix and why we shouldn't kill animals and cut down trees" story. Hey, I'm all for humans being wiped out and am a firm believer in the idea that our planet would be better off without us. That being said, though I understand Legend of the Forest's message, it was portrayed in such a terrible manner that I didn't really care. Yes, it sucks seeing animals get squashed and romances (of sorts) be destroyed by humans, but at the same time, the overall pacing and the extremely horrid attempts at animation overshadow any attempts the plot tries to make at making you sad. If you need a definitive plot, you won't find one. We see two instances of humans trying to mess with animals, thus killing them, and we see the revenge the humans get. Princess Mononoke, anyone? Or Pom Poko? Both were much better than this. The pacing is glacial at some points (though this might have only felt glacial because of the terrible animation) and spastic at others, and sometimes hard to follow. A good idea for a story, but a very poor execution in several ways. AnimationFor something made in 1987, I see absolutely no excuse for how poor the animation was. This looks like it came straight out of the 50s or 60s, with very odd mixes of still scenes (that look like they came out of a manga, but worse), black and white cartoonish bits that look like they came out of an American cartoon, and lastly, the only interesting aspect, the colored scenes. Unfortunately, all of these are somewhat mixed together at times and ALL of them look incredibly crude and simple for that time period. The only parts I think I felt were a passing grade were the scenes with the fairy folk and dwarves, since they seemed to have more detail than the other animals and characters. Even these, though, were far FAR too simple for the time period, and needed detail, better colors, and better animation in general. Colors were either none (black and white), light shades of blue, or the semi vibrant dark colors near the end of the movie. Uninspiring, all of them. SoundLegend of the Forest is set to Tchaikovsky's Fourth Symphony, and thus, the music is very classical and very overpowering at the same time. Had the music been turned down a notch it would have been more effective, but it felt like the "story" was on the back burner as opposed to the extremely loud and invasive violins and cymbals. For the subject matter, this orchestral music was definitely appropriate and fitting. I just wish it had been less blaring and more in the background. CharactersThe only characters, per se, are the animals and the few humans. The woodsman does come off as mean and evil, I will say that. He cuts down these trees with faces and shoots animals, of course he'll seem bad! Really though, it was fairly sad what he did, so I guess the movie succeeded on that note. The only animal that really made me sad was the first tree squirrel who genuinely looked upset when its baby died (happens in the first 2 minutes, not really a spoiler). The other animals weren't developed enough for me to care. In addition, the flow of the movie was so terrible that often times I was confused as to what was going on now, instead of focusing on being empathetic towards the characters. The character designs were fairly damn odd as well -- birds that have breasts? Man who looks like Adolf Hitler? What were you thinking, Tezuka? OverallLegend of the Forest was a huge waste of thirty minutes. Had it been longer than thirty minutes I would have thrown myself out the window to escape the pain. I can't think of much that's redeeming about this, even for die hard Tezuka fans. The music was good, that's for sure, so I suppose anyone interested could simply turn this on but then turn the TV off, thus hearing the nice music but not seeing any of the crappy animation or average story to begin with!

Osamu Tezuka strikes yet again with yet another interesting experimental short movie. Legend of the Forest is interesting for its concept and not for its story or characters. What you practically get here is an excuse of a story used purely to show the evolution of animation. Each segment of the movie is done in a style that is reflecting a different decade, and as the story progresses you see the animation methods as they evolved over the decades. Starting from static pictures, to granny black & white, to color, to the use of computers in order to make objects look more real. It is all quite interesting from an artistic point of view. On the other hand, there is not much of a story or interesting characters in it. Even the few specks of those make little sense and are there as plot devices and poor excuses to keep the plot going. It starts as the tragic life of a squirrel but after a point on it turns to some ecology-pro story, showing evil humans destroying the forest and the creatures living there try to find a solution. Where did the squirrel go??? Where did these mythological creatures appear from??? And what kind of a co-out ending is that, throwing tree-hugging messages at my face like that? Is this movie supposed to be for the family and offers politically correct messages? I thought it was an experimental movie for the elite so why did it perform such a turnaround and became a mediocrity towards the end? Anyways, the aesthetics of the movie in terms of production values are very eye-captivating while story and characters plain suck, not just because they are simple and political correct but also because they are poorly written and directed. It is an interesting shot but it could have been a lot more if it weren’t so easy going. 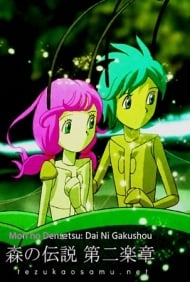 Legend of the Forest: 2nd Movement