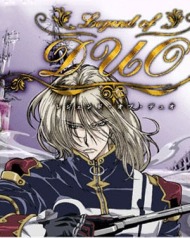 Humanity is on the brink of extinction due to a mysterious disease that kills without warning. Living amongst the humans are vampires; one of whom is Duo, a so-called traitor to his race. Having revealed a secret that would allow humans to save their lives, Duo inadvertently turned humans against the vampires, and thus was deemed an enemy of his own people. Zieg is a vampire with close ties to Duo and will stop at nothing to defeat him for his transgression, but is he strong enough to take revenge on the one who is closest to him?

StoryWhat do you get when you cross a bishounen vampire with a gun? Something that should have been a lot better than Legend of DUO! I had heard nothing but negative things about this series before viewing, but decided to check it out for myself. While not nearly as bad as I’ve been seeing in reviews elsewhere, it definitely has many factors that make it not in my top 50. Story-wise, the best non-spoiling description can be found in the AniRec entry. Basically, humans are dying off and trying to hurt vampires to save themselves (for a reason that DUO shared to the humans, thus causing him to become an outcast amongst his fellow vampires). Zieg is a vampire with close ties to DUO, and even though they have an intense history together, for some reason he now wants to defeat DUO for what he did. And then the confusion begins... What should have been a straightforward revenge (but why??) story turned into something fragmented and scattered. We are shown flashbacks at least half of the time, often relating to scenes shown just prior, but other times coming out of nowhere. It’s hard to tell, at times, what is really in the present and what is a flashback. Combine this with story details that aren’t explained at all, or seem to be giant plot holes. For example, how is it that vampires are killed? Especially, without spoiling, due to the reason why the humans want to hurt the vampires. What’s up with this disease and what does it really do? It’s guessable, but never really explained. Why is Zieg out for revenge? Etc, etc. The ending is just as rushed as the rest of the series (as the 12 episodes are only 5 minutes each), and ultimately you leave the series feeling very unfulfilled. AnimationIt’s unfortunate that the budget for Legend of DUO was clearly insanely low, because the background scenery shots and overall character designs were gorgeous (with the exception of Zieg’s uber mullet hair). Take a look at the screenshots in the AniRec; BEAUTIFUL scenery, and pretty bishounen characters. So where did it go wrong? Well, every other aspect of the animation. First of all, there isn’t much animation at all. Characters stand still with plain backgrounds (or, for example, in a few shots a character was attacking and had literally neon lines behind him... uhhh), or pieces of characters are placed on the screen one by one, sort of like what a manga page looks like. Then there’s the occasional real life footage clip thrown in out of nowhere, and the still scenes. So pretty much everything about the animation was bad, except the gorgeous backgrounds and character designs, and the overall coloring; for example, the glowing red eyes of the vampires were fairly neat. SoundBaaaad. Imagine the worst techno/guitar song ever and then play it over and over. There was literally nothing unique or interesting about the music accompaniments. Don’t watch this for the music. The voice actors were ok though.CharactersAgain another area that suffers. Because of all the crazy flashbacks it’s hard to keep track of who was involved in what scenario. We get vague ideas of some of the characters’ pasts, but not nearly enough to actually have any sort of emotional involvement with them. It’s never really clear what Zieg and DUO’s relationship is, with hints of shounen-ai going on. There are a variety of other characters but none are worth mentioning. OverallThe main thing that Legend of DUO has going for it is the beautiful scenery shots. Other than that, there’s little good to be gained from watching it. Vampire completists might want to add this to their collection, but other than that I think you’d be better off watching a different vampire series, or different series altogether.

Story:Well; Before you even start reading a little bit of a warning. This is not the kind of fun, relaxing movie that you watch just for fun.The story is very minimized, complex and distant. Every detail that is not absolutely necessary is left out (for example the disease is never really explained). Moreover due to a lot of flashbacks it's often hard to follow. The reader might ask himself, whats going on, but every flashback has it's reason. Not only do they explain the characters, but they also reveal the main topic of this Anime: The philosophy.Instead of  telling a story that's very much like one hundred others, this movie asks questions (for example: What is love?). Finally the Anime gives you a totally different look at the world. Instead of showing the ideal human, or the way to becoming one this movie shows the worst sides of humanity.10/10 Animation:The characters themselves are drawn very detailed, however the background is very simple. Often the only background is a colour or a very roughly drawn wall. Every once in the while it seems as if this simplicity is used in order to make the audience concentrate on the main events, but that might just be my interpretation.6/10  Sound:The voice actors are OK. Nothing really special about them. Sadly the music is very disappointing. It is often very repetitive and boring.4/10  Characters:Just as the story the characters too are only enjoyable for a certain type of audience. You never really connect to DUO. All his actions and Ideas are very distant and although you might be able to understand them at the end you never feel truly connected to him. Instead of being a character he is more like a personification of wisdom. The protagonist on the other hand is very human. He makes a lot of mistakes, that seem so natural that the author might not even consider them mistakes. Other than DUO he is pretty easy to understand, however the audience does not really feel connected to him either. Just like DUO he seems far away.The once you can really connect to are the humans. They too are very representative, however their actions are so realistic and typical that the audience can understand them without ever really getting to know them. They are like a big faceless mass, but because they are like this it is easy to imagine being one of them.6/10 Overall:All in all I  came to a maybe a little bit surprising conclusion. Instead of a nine I should give this Anime a 7 if you consider all parts as equally important, however for me the sound and animation are not really all that important (Just compare the texts lengths :) ). Instead I want an interesting story with some meaning behind it and characters that underline this meaning and in both of this the Anime succeeded. Not only is the story very philosophical it's also something different. If you are into philosophical stuff than this is your movie, if you are looking for a typical shounen about a guy who takes revenge, than don't watch this Anime, it will be a waste of your time.9/10

I liked the anime in my own way. It was a nice anime, vampire + BL is exactly my type. The problem was only that this one didn't get much hard work. The animation was also good, but it was not what you can say 'a masterpiece', but overall, I think it does deserve at least 8 or 9 out of ten. My actual overall rating was 8.5 but I don't know why I like it so much?! XD Anyways, hope another season comes but with more hard work and better animation. The reason for season 2: because Stefan himself said at the end, 'the story remains or continues' I mean a new character showed up at the last scene and there was barely shounen-ai in it man!  But we can't do anything if they don't make it (I mean it's 2020, which is also going to be finished soon, so it's very la~te) but still, we can have good and high hopes! then everyone who reads this review, please leave a like and have a good life, May God Bless you~