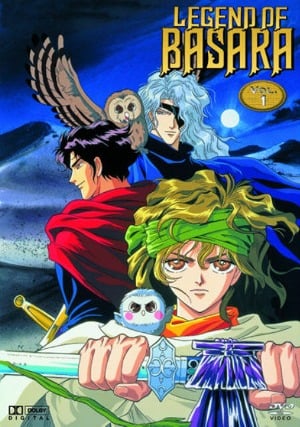 In ancient medieval Japan, the people are oppressed by a brutal emperor and his four children, with no hope for the future… until the prophet Nagi proclaimed that a child born on a day would be their savior. Twins were born that day, a boy, Tatara, raised from birth to be Japan’s savior, and a girl, Sarasa. This is her story: a story of great personal loss, tragic romance, and a resilient unbreakable will.

StoryLegend of Basara takes place in a beautiful fantasy type world full of castles and kingdoms, knights and warriors. We are introduced to two twins: Tatara, who was foretold by the prophet Nagi to be the chosen one to unite Japan, and Sarasa, his ignored and unappreciated sister. Through a series of events, Sarasa's family, including Tatara, are brutally killed at the hands of the Red King, leaving her to take over her brother's identity as Tatara, to continue his legacy. Note: if you are angry at me right now, don't be... this happens in the first part of episode 1. I've read a fair amount of reviews for Basara that all talk about how bad the story is. Let me just say that this is one series that I'm glad I chose to watch for myself, instead of just believing others. Legend of Basara is indeed complete, and ends on a cliffhanger of sorts nonetheless. This is because it was cancelled due to lack of ratings, which I don't fully understand. The best comparison to the storyline would definitely be something epic like Juuni Kokki. Indeed, maps are even shown as the characters travel, which JK does as well. Unfortunately, due to its cancellation, it doesn't end up completing the storyline like JK did, and might leave you wanting more. The story itself is epic and grand from episode 1, and doesn't let up at all the entire way. Basara is very plot heavy and political in nature, which means some people might find the material to be dry or boring. The Heroic Legend of Arislan is another good example -- it was heavy and plot based just like Basara, but still ended up being very interesting. Truly the most compelling and heartbreaking aspect of the series is the star crossed lover situation that arises. If I said who it was, that might really be a spoiler, so I'll refrain. Just trust me when I say that the romance part of the story is the part that is the most heartbreaking and frustrating to watch, since you know the secret and can't say anything about it. You want to know what will happen with the two, but guess what? You can't, because it just ends. That, honestly, is my largest complaint with the lack of ending. So, to summarize, I felt like the storyline of Basara was grandiose and superb. They key is to go into it thinking the show is the length of something like JK, so the pacing makes more sense and seems more reasonable. Otherwise, sit down and strap in for an epic journey of a girl who is much more than she seems to be... AnimationThe animation style of Basara definitely isn't its strongest point, but still is interesting enough to get a good score. Character designs definitely look older, with very pointed faces and thin necks on top of pointed bodies. Faces are very long as well, looking like something from Rose of Versailles or other older pieces. The colors used in general were a broad range, and backgrounds were impressive, especially when the city or ships were on fire. I must say, the one thing I felt was ridiculous is that Sarasa could "change" to Tarata simply by putting on a bandanna across her hair. Suddenly, she was unrecognizable, even from the man she loved. I'm thinking to myself "what the hell?!" This just isn't realistic, and a little bandanna that doesn't even cover the face really shouldn't change a person's identity and all. Besides that, good stuff all around, though nothing extremely exciting. SoundThe audio was pleasant, though forgettable in the long run. Regardless, the piano and light synthesized tracks made for wonderful and moving background music on almost all occasions. Voice acting was great for most people involved, but the voice of the Blue King was very weird and ridiculous to say the least. Dave (who was diligently working on a theme at the time behind me) did so much as to turn around and ask "what's up with that guy's voice?"CharactersThe characters in Legend of Basara were plentiful and diverse, and developed nonetheless. Even secondary characters tended to have some bit of backstory, but perhaps not as much as you would have liked. This would have been impossible anyways given the amount of them that are introduced to you. The primary character is Sarasa, of course, and her transformation throughout the series (especially in her romance) is profound and compelling. She behaves and acts like someone you might know, with a conviction that isn't rivaled by many. The Red King is another such person, who is portrayed to be a villian, yet is also shown to be something much different as well. The depth of these characters help you to become involved in the story, and in the long run, help you to be more angry once it ends on an incomplete note.OverallAs far as I'm concerned, this is a very underrated series. The story is interesting and epic (VERY RARE, that I've found), the music is interesting, the characters are deep and strong, and the animation is watchable at least. That being said, people still score it badly, and it has to be because of the open ending. I wouldn't necessarily not pick this one up for that reason, because the story itself is very good, and you can always read the manga later (or talk to someone who has) to see how it ends up. Legend of Basara ended up being a treat to watch, and I think it might be for you, too.

Let me start by saying that I read the manga before I watched the anime, so I went into watching it knowing the anime was unfinished. That said I still had some pretty major issues with the story. Spoilers lie ahead. Be warned. Story: Let me just start by saying that it is ENTIRELY possible for someone to live out their life and even fight a war as a cross-dressing badass. Sarasa/Tatara (who for convenience will henceforth be known as Tatas) failed at this. No bandana, no matter the snazzy Travolta-esque angle you wear it at, is an adequate disguise. Hell, even Batman and Superman grasped the need to alter their voice and appearance beyond the basics of adding pants and a bandana to their outfit. Tatas, however, just put on her dead brother's clothes and went forth. And while we're on the subject of her dead brother, WTF!? The town mystic/shaman/elder basically admits that he lied about this poor boy's destiny so Tatas would be saved when the time came for someone to stand up to the Red King. So, rather than hiding the kids in the mountains or training the girl somewhere in secret you let the boy live his life thinking he'll save everyone and BAM! - no head. Hell, Souka fared better against Zuko in their first encounter and frankly Zuko was a more compelling antagonist than Bishie King. The basic premise wasn't bad, and to be honest it was something I've seen before and keep coming back to. I love the idea of someone having to hide their identity to save the world. That's why I read comics. The problem here was the idea that a healer-in-training would suddenly be a badass with a sword because that was her destiny. Look, I wrote a quizilla story like that years ago (no, I will not give you the link) and even as I wrote it I had to admit that it was highly implausible. At least I used magic to explain it away. Tatas didn't even have that on her side! The star-crossed/doomed romance was truly compelling and is honestly what kept me coming back. I wanted it to work out somehow for these two people and I even wanted the hottie bff of the King to be happy. His subplot had me weeping openly. There was some really good stuff here, but the implausibility of this tiny girl leading a revolution based solely on Elizabeth Swan skills left me cold. I kept waiting for a revelation on how the romance could be the peace and salvation her prophecy spoke of, but the story just never went there. Peace and understanding was never considered, though I must admit this was made unlikely by the fact that they never figure out who the other really is. Maybe that's the problem with watching rather than participating. Why aren't there holodecks yet?! Animation: The anime was made in the late nineties but feels much older. Some of the scenes, particularly the battle scenes, were truly breathtaking but on the whole it felt so dated that I had trouble finding much to enjoy in the overall animation. Some of the movement felt a little choppy and the costumes varied too much for me to get a solid feeling for any specific era or influence. Sound: The soundtrack and incidental music was typical but fitting. I never felt jarred by the music; instead, it faded gently into the background, enhancing and punctuating the way good sound should. The voice acting was a little hit or miss. Tatas didn't pull me in, but the actors for Red King and his bff, as well as the cross-dressing spy helping Tatas were all spot on. This however, leads directly into - Characters: The characters really did carry the story. As ridiculous as I found the execution of the premise, I kept coming back for the characters and their stories (and not just because the men were pretty). You got the uncertainty and genuine desire to unite and protect his people from the king, although you knew he was going about it in the wrong way. You felt bff's devotion to his friend and king and his utter heartbreak when he discovered who Tatas was. Again, the only character I wasn't fully invested in was unfortunately the main character that I was supposed to identify with and root for. Partially this was because I found her irritatingly dense. Overall, this is an anime totally worth watching for the few moments of stunning animation among the mediocre and the incredible story happening within the court. Perhaps you won't have such an issue with Tatas, and for that I commend you. And if you absolutely must know how the story ends, look up the manga. Bring tissues. 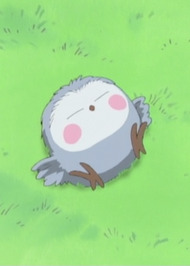 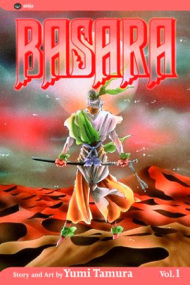