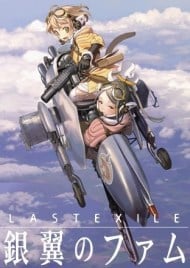 Years ago, humanity abandoned the ruined Blue World. Generations later, with the planet again capable of sustaining life, mankind returned. In the skies above the reborn world, rebellious young Fam and her best friend Giselle make their living as Sky Pirates. Atop sleek Vespa Vanships, the girls dart fearlessly through the clouds, capturing and selling airborne battleships for profit. It’s a life of care-free swashbuckling – until the Ades Federation attacks. The only nation to remain on Blue World during humanity’s exile, The Ades Federation wages war against those who returned only after the planet’s darkest days had passed. When Fam and Giselle rescue a princess from the clutches of the rampaging Ades armada, they join the young royal’s battle to save her Kingdom from destruction – and undertake the impossible mission of uniting humanity in peace. 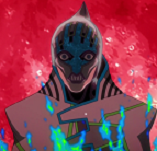 In 2003, Gonzo made “Last Exile”: a neat adventure story with gorgeous visuals set in a fascinating world inhabited with some intriguing characters and, most importantly, a genuine sense of adventure and wonder. That said, it had its problems: the main characters were bland, the story pace was uneven and the ending was a rushed mess. Fast forward to 2011, Gonzo is diving into the world of Last Exile yet again with “Last Exile: Ginyoku no Fam” (TL: Fam, the Silver Wing). A sequel that's only loosely tied to the original, both in story and, sadly, in quality. Set an unspecified number of years after the original, “Ginyoku no Fam” is an adventure story starring Fam, a spunky young pilot who dreams of a free and peaceful sky. Said wish is brutally shattered when the powerful Ades Federation declares a war of global conquest. Fam gets involved in the conflict when she rescues a runaway princess from Ades' one of Ades' first conquests and vows to help her get back her kingdom and end the war. Sounds familiar? That's because it is. It's the same basic story that you've seen in a hundred fantasy books, children's cartoons and role-playing games. Being derivative is not a dealbreaker in and of itself seeing as even the most formulaic story can become riveting when injected with interesting concepts or explored from a fresh new angle. While “Ginyoku no Fam” makes a few decent attempts at the former, but it's undone by haphazard storytelling that focuses on all the wrong things.  The titular character herself is actually one of the shows biggest problems: Fam is obnoxious, naïve, pushy and prone to get herself involved in affair that she knows nothing about. It wouldn't be bad if the narrative actually acknowledged these qualities as a bad thing or tried to somewhat realistically depict the downsides of having such a personality but it's all too obvious that the makers of this show wanted the audience to be charmed by Fam's unyielding optimism. Worse yet is that the creators' infatuation with her extends to the way she manages to charm and influence every character she comes across. Hell, at one point the main villain even expresses his admiration for her even though they never had any meaningful interaction up to that point. The problems created by the constant focus on Fam actually seep into and corrupt the overall story. Part of what actually made the original series so captivating was that the main characters were part of a much bigger world. Their presence and influence on the grand scheme of things was minimal, as one would expect from a bunch of adventure seeking kids. This hint of realism made for an adventure story with a fresh twist. “Ginyoku no Fam”, however, is very clear about how we're supposed to see Fam: a messiah whose energetic demeanor is the solution to all the world's problems. It's a real shame seeing as the story had elements that could have made for a great watch. The Ades Federation initially seems like the typical evil empire but are quickly revealed to largely consist of sympathetic individuals whose firm conviction is borne from desperation more than anything. Other bits of world building such as the tensions between Exiles and Natives, both of whom are convinced that they are the world's “rightful people” (allegory, anyone?) are similarly intriguing, as is the brief glimps we get of the seemingly theocratic and secluded nation of Glacies. But hey, who cares about things like that when you can watch girls walk around in maid outfits or lecture about how people should just “get over” feelings of mutual resentment that have existed for decades? The production values are all over the place. The visuals in particular range from spectacular to absolutely awful. Anyone who's a bit knowledgeable about animation will tell you that anime series are no stranger to saving their budget for lavishly animated sequences while other scenes have considerably less effort put into them. “Ginyoku no Fam” is no exception, but I can't recall another series where the quality of the visuals fluctuated so massively. And that's not even the worst part: the series renders the airships in CG and it looks terrible. Which is all the more shocking when you realize that the original series looks fantastic despite being one of the first series to rely heavily on 3D computer animation and CG. The final visual insult, however, is that many of the big battles that are fought over the course of the story look absolutely terrible. All of them are absolute clusterfucks that are devoid of any sense of urgency seeing as the main characters always find a way to turn the tides no matter how badly the odds are against them. Ultimately, the only conclusion I can reach is that this series is a failure both as a standalone adventure story and as a sequel. Correction: it fails especially as a sequel. Very few of the original series' characters show up and the ones that do just get completely sidelined in favor of the “fun” adventures of Fam and girlfriends. The only character from the original series whose role comes close to anything substantial is Dio and he flat-out disappears for large chunks of time. There's also very little connection to the original series in terms of themes, atmosphere or world building. A cynic might even suspect that Gonzo simply took a tried-and-true storyline, mixed it with currently popular character archetypes and slapped the label of one of their older and best received series on it. It would certainly explain the creative bankruptcy on display in this mess of a series. “Last Exile: Ginyoku no Fam” is a huge disappointment. I can reach no other conclusion.

Story- The plot of Fam was for me much the same as the original Last Exile: I was deeply confused in the beginning, but became quite attached to the characters in the end. As with the first season, there are a number of different factions vying for power through the use of various airships with a 19th Century feel. Thrown into this conflict are the semi-mystical giant ships called Exiles which have star-traveling capabilities. Basically, in the past the world descended into chaos and the various nations inhabiting it constructed these Exiles to flee to other planets. But now things have settled down back on Earth and these same nations are returning, much to the displeasure of the Ades Federation--the only nation to have remained. The main characters from the original Last Exile are one of the groups returning. I found this dynamic between Ades (basically the antagonistic nation throughout the series) and the nations that "abandoned" Earth to be interesting. There are a great number of airship battles throughout the show, but just as important are the political maneuvers behind the scenes. The large cast of characters and their various motives combine to create some good conflict. Wound into this is the quest of the idealistic main character, Fam, whose adventures I will admit drag at some points. I also abhor the two recap episodes, one which inexplicably covers the original Last Exile and one which recaps the events of Fam up to that point. The 21-episode length is atypical, but I think it was a good choice on the part of the writers. They wrapped up the action nicely during that time without dragging out the climax.  Animation- Gonzo always has superb animation, and Fam is no exception. The admittedly large number of juvenile characters have simple, round faces and relatively large eyes. Proportions are otherwise relatively realistic. I particularly admired the use of colors in some characters, such as Vasant (purple) and Admiral Sadri (green).  For the high number of ships present in the series, they have surprisingly poor design. The battles make good use of CGI, but it just doesn't have the same punch as hand-drawn material. Sound- I particularly liked the OP, "Buddy," as it has some strong instrumentals to back up the singing. The soft ending song produced little effect on me. Voice actors are all fine, except for that of Augusta Sara--she started to get on my nerves. I tip my hat to Takaya Hashi, who voiced Admiral Sadri. Characters- The three main characters--Fam, Giselle, and Millia--are all teenage girls, which irked me immensely at first. I was afraid that the three of them would blur together and ultimately end up as one bland mess. Thankfully, their personalities and actions differ enough through the series to make them at least slightly memorable. There were some characters, like Millia's sisted Liliana, whom I terribly wanted to smack. How can someone be so stupid? The villain, Luscinia, has a somewhat bland personality but he does his job. Overall- It's a good series. Perhaps not quite as good as the original Last Exile, but still well worth watching. 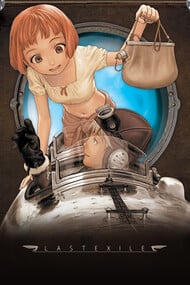 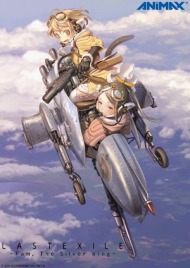 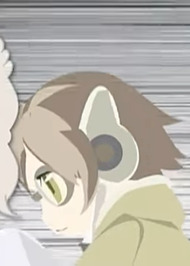 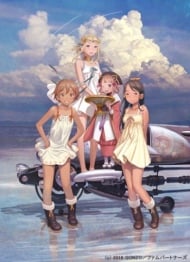 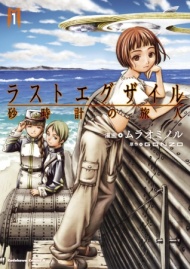 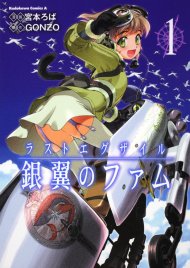