Laputa: Castle in the Sky 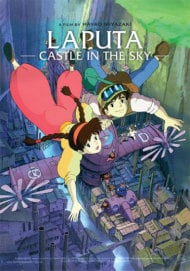 Legends tell of a floating island in the sky known as Laputa, upon which is rumoured to be treasure beyond a person’s wildest dreams. Sheeta is an orphan girl who is being hunted down because of her necklace, a rare Levistone, which legend says will lead the way to Laputa. One day she is saved by Pazu, a miner apprentice and also an orphan, and together they set out to escape from her would-be captors. Unfortunately, their friendship must go through endless trials in their quest to hide Laputa's location. What is Sheeta’s mysterious legacy, and what hidden motives do Sheeta’s enemies have in regards to finding Laputa?

Recently I have really gotten into the works from Studio Ghibli, and Castle in the Sky was on my list so I decided to watch it. -Story- The story is very interesting and intense. It keeps you on the edge of your seat with the action, but it is also endearing for the heartwarming scenes that it has. Throughout the film I felt very emotionally invested in the film. I cared about the characters and what happened to them, which is the mark of an excellent film. The story starts out with this boy named Pazo who catches a girl who floats out of the sky named Sheeta. The story follows these two as they go on an adventure to find the lost floating city of Laputa, and along the way they meet interesting characters, both friends and foes, and foes that become friends. There really isn't anything that I can complain about the story. -Animation- As expected with a Miyazaki film, the animation is top notch. Castle in the Sky is a well animated treasure of a film. The animation looks smooth and interesting, the Miyazaki style is still as heartwarming as ever, the environments that the characters lived in were both amazing, and quite realistic as well. -Characters- I loved the characters in this film a lot. The relationship that Pazo and Sheeta share is quite remarkable, and both of them are very interesting, and they made me quite emotionally invested in Castle in the Sky. Their struggles were my struggles, their triumphs were my triumphs. There is also an exceptional secondary cast in this film, from the villian Muska to the antihero Dola. This film has a great cast of characters and they are all quite fun to watch. -Overall- What more can I say about Miyazaki's work here. He did an excellent job like he always does, and if you haven't seen Castle in the Sky, then you need to watch it.

I think this has to be one of my favorite Ghibli movies. I love the animation, the story, the sense of wonder, but, most of all, the characters. I love the opening of the movie, as it sets everything up so perfectly while still giving a sense of wonder. Sheeta is an adorable girl, and it's easy to see why others would want to protect her, but then she's shown, even in the beginning, to be more than just a damsel in distress. With Pazu, I love how uncomplaining and hardworking he is, and the way they animate him just adds to his charm. As for the other characters (aside from the military), I love how they interact with one another. It's clear that this is a hard world, but that doesn't stop people from being caring and kind. I'll talk a little bit more about certain characters in my spoiler section, but that and the animation of this movie are its greatest strengths. It makes this movie into a gorgeous film, and one that I wouldn't get tired of watching. You can't help but care about the characters--even ones you thought you wouldn't, at first. . SPOILERS BELOW . . . . . . . . . . . . . First, there's Colonel Muska. I loved how he seemed to be such a calm and collected individual, but as soon as he doesn't have to pretend anymore, he turns out to be a crazy man. A part of it could just be he's mad with power, but I didn't feel like it was the power that changed him. He was just always crazy, but knew how to hide it until he got what he wanted. Then there's the pirates. I loved them! They were so funny with Sheeta, all going to help her out and then getting jealous of one another. Dola was much slower to reveal that she cared, but that made the reveal all the more sweet. She puts on such a tough exterior, and at first she really didn't care about Sheeta, but it was great to see her slowly show her softer and more caring side. Which, she still tried to stay gruff, but it was really sweet. Then, to switch to Laputa, I loved how the spell of destruction at the end destroyed all of the technology, but not the grave/nature above it. That was so cool that even such a powerful spell respected the monument up above. I do have to wonder at the shine of the stone, keeping the castle afloat. Did it lose all of its powers except for the ability to make the castle float? That's what I believe, though none of the characters mentioned it at all. Still, it was a great movie, and it's one I would like to own. 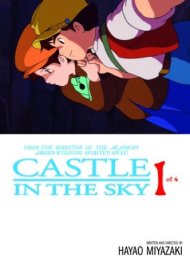 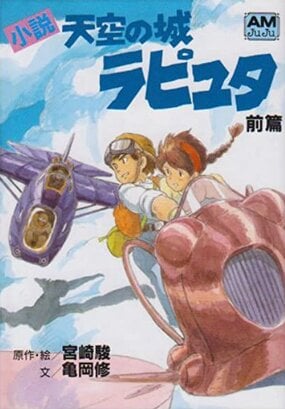