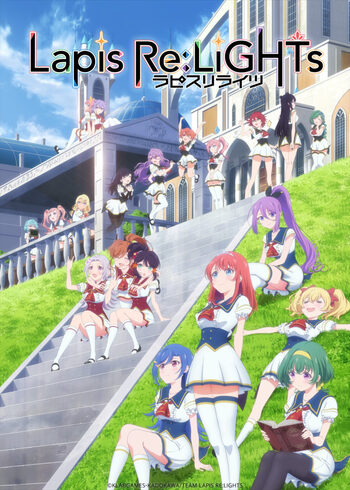 At first appearance, Lapis Re:Lights is a typical idol girl anime drawn in a “shoujo” style. Shoujo is a demographic that’s targeted towards a young female audience. So the art style is more detailed, colorful, and visually appealing.

The story is pretty mediocre, and generic. This magical school houses different female idol units. Its founder was among one of the famous pop band members. The scarlet-haired Princess Tiara enrolls in the academy because of her aspirations of becoming like her older sister. She is very cheerful, and optimistic. Only her blue-haired childhood friend knows her secret royal identity. But she is ultimately faced with a tremendous obstacle. The group she is stuck with is in danger of school expulsion. But the story doesn’t teach the girls to try hard despite constantly getting points deducted. There’s not a lot of character development.

The episode plot can be very random at times, and it’s a very average anime.

When I first heard such an anime exists on Instergram, I passed it off, thinking it was a normal idol anime about saving school and didn't have high hopes for it.

However, in November, I thought about it and decided to give it a try. I was totally wrong! It's not always talking about idols and performances; it also tackles magical girl genres and fantasy genre. Sometimes, less is indeed more. Although it was a mere 12 episodes, it emerged to be my best anime.

My favourite has to be Tiara. She's a very sweet and caring who stands up for her believes, and doesn't let her past affect her emotion.

My least favourite, though is Yue. To cut a long story short, she is too brash and rude, especially to Tiara. But it's overall an excellent anime. You may even change your thoughts about idol anime!

This anime seems great to me, I respect the opinion of those who say that it is boring or cliché, but personally I find it very cool that they are idols and witches at the same time.
I love the characters, each one has their own style and each one has a different personality that characterizes them.
The animation is the best, the anime is very well animated and it is rare to see flaws in the animation, and if there are, they are hardly noticeable.
The music is nice and calm, the opening and ending are very good.
The anime DOES have a plot, although many complain that it does not, if it does, (SPOILER) Tiara enters the school although her older sister, Eliza, will deny it, so she does everything possible to try to get Eliza's voice back . Through the knowledge she learns at school, although she has not succeeded, she keeps trying, which makes the protagonist appear human and has her own personality.
And finally, the first few episodes are boring for some because they are literally to introduce the characters and the school where Tiara will learn.
I look forward to a second season :)