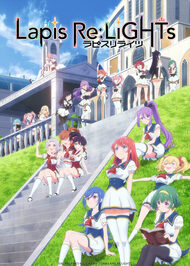 Tiara at Flora Girls Academy is where witches are trained to purify the magical beasts that threaten the humans. Together with her classmates, Tiara is ready to learn how to save lives and bring smiles to people’s faces.

This is a show I initially didn't plan on watching, and also one I've barely seen anyone talk about. Only 6 episodes have passed, however my opinion of the show has been the same since episode 3 and I don't expect any of the future episode to change that. Anyways, onto the review.  Story: If you don't want to read the full on synopsis I'll post in the next few paragraphs, here's a quick one sentence summary: The show combines qualities of an idol anime with one that has some characteristics of witches and magic. The story primarily takes place in an academy for witches, and out main characters are a group called LiGHTs. They're kind of an idol group, however each member has their own skill. Tiara, our main protagonist has plant magic, Lynette's involves knowledge about all forms of magic, Lavie's is that she's the most athletic of the group, etc... The synopsis for the show about defeating magical beasts that threaten the humans so far has been inaccurate.  The early main plotpoint is that the group LiGHTs is in danger of failing and is close to being expelled from the academy (the school devides its students into 3 categories: Noir students are the highest performing, Rogue are the average students, and Lapis are the lowest performing). Early on I thought the show would focus on the obstacles Lights faces in an attempt to improve their grades and eventually reach Rogue or even Noir rank. However, it seems like that storyline has been betrayed for the past 4 episodes. Instead, what the anime has done is give each group its own episode where they're the main characters. For instance, episode 4 focused on Konohama Wa Otome, episode 5 focused on Sandistic & Candy, and episode 6 focused on IV Klore (all of which are other idol groups). LiGHTs is in those episodes as well but they're sort of relegated to secondary characters). While it's cool to get to know our other characters and see their personalities, the anime doesn't match the synposis, and occasionally strays into unnecessary fanservice that has no relevance to anything (Tsubaki's whole character involves fanservice for example). That really limits its score. So while the premise is interesting, and getting to know our characters are cool, there are just other irrelevant points that the show would be better off without. Edit: The anime has begun to focus again on LiGHTs and their progress as a group. The storyline is beginning to even out and make more sense. Animation: For a show that features idol groups, you'd expect the animation to be colorful, and it is. Character designs are fine. Also of not, the animation for orchestras (more on those below) looks like it was done differently than the standard animation for the rest of the episodes. It bothered me at first, but as more orchestras were performed it didn't as much. However, the standing animation is the same for each character and looks ridiculous. If you watch the show you'll see what I mean. It's like they're standing with their feet 2 feet apart. That complaint might seem trivial, but it does getting annoying. All in all however, the animation is solid and I can't complain too much outside of that. Sound: For a show that has somewhat of a focus on idols, you'd expect to music to be good, and I think it is. When I mentioned that each group sort of has their own episode devoted to them, that includes the group performing something called an "orchestra". So far, though 6 episodes 4 orchestras have been performed, and my personal favorite was done by Konohama Wa Otome. I like the rock element they used in their performance and thought it was creative. All the orchestras have been solid so far, so out of all the categories, I'd have to score this one the highest. Characters: I'll use this section to talk about our main group Lights. The group is fairly stereotypical. You have Tiara our main character who's very cheerful and optimistic, you have Rosetta her best friends who's very loyal (and hinted at having romantic feelings), you have Lynette who's very smart but not athletic, Lavie who's athletic but not very smart, and Ashley, who essentially has the qualities of a sterotypical knight. Basically the usual tropes. I think the character department is average. They're not bad, they're not good, they're just ok.  Overall: When averaging all the categories, the show gets a 7/10. It's a good show, not one that will stand out much, but you could do worse. I'd recommend this to anyone who is a fan of idol shows or those who like anime with good music. Favorite Character: Lavie. In a show like Lapis, I have to go with Lavie since she's the most relatable. After Lavie I'd have to say Nadeshiko from Konohama Wa Otome is my 2nd favorite character. Least favorite character: Tsubaki. Her entire character is pointless and stupid. It's a shame too because music-wise, Konohama Wa Otome is my favorite group.

When I first heard such an anime exists on Instergram, I passed it off, thinking it was a normal idol anime about saving school and didn't have high hopes for it. However, in November, I thought about it and decided to give it a try. I was totally wrong! It's not always talking about idols and performances; it also tackles magical girl genres and fantasy genre. Sometimes, less is indeed more. Although it was a mere 12 episodes, it emerged to be my best anime.  My favourite has to be Tiara. She's a very sweet and caring who stands up for her believes, and doesn't let her past affect her emotion.  My least favourite, though is Yue. To cut a long story short, she is too brash and rude, especially to Tiara. But it's overall an excellent anime. You may even change your thoughts about idol anime!

Lapis Re:Lights Genres: Music, School, Magic, Fantasy       Demographic: Shoujo  Art: (7/10)  At first appearance, Lapis Re:Lights is a typical idol girl anime drawn in a “shoujo” style. Shoujo is a demographic that’s targeted towards a young female audience. So the art style is more detailed, colorful, and visually appealing.  Story (4/10)  The story is pretty mediocre, and generic. This magical school houses different female idol units. Its founder was among one of the famous pop band members. The scarlet-haired Princess Tiara enrolls in the academy because of her aspirations of becoming like her older sister. She is very cheerful, and optimistic. Only her blue-haired childhood friend knows her secret royal identity. But she is ultimately faced with a tremendous obstacle. The group she is stuck with is in danger of school expulsion. But the story doesn’t teach the girls to try hard despite constantly getting points deducted. There’s not a lot of character development.  Sound (5/10)  The different idol units sing Japanese pop themed songs.  Enjoyment (5/10) The episode plot can be very random at times, and it’s a very average anime. 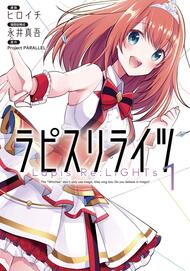