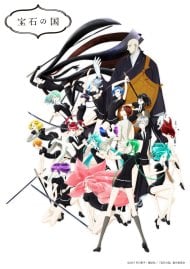 In the distant future, microscopic organisms have left the planet desolate and given way to a new life form: Houseki. However, all is not peaceful. The 28 Houseki must fight against the Moon Dwellers, beings who attack them without discrimination and use their shattered bodies as decorations. For this reason, each Houseki is assigned a role, whether it be a fighter or a medic. Phosphophyllite, or Phos, is the youngest of their kin, and has not been given an assignment due to a lack of skill. Everything changes when Kongou, the leader of the Houseki, assigns Phos the task of creating an encyclopedia of natural history.

This indeed is an eye-catching anime among the others. Anime fully animated by CG?! Yes. And it does its job well unlike other shitty CG animations. Not only the animation, but the story, characters and the VAs are top notch. This really is a "gem" ( ͡° ͜ʖ ͡°) among the ocean of anime ( Oh god the puns....) And this definitely is my anime of the year 2017 and here's why. Story (9/10)The story setting itself was intriguing. People made of gems? No humans? and there is a lot more. It was just done brilliantly. Your brain will be constantly on the work decrypting the possible paths the story can go and how interesting it would be if it did. And believe me, the story won't fail to amaze you. The first episode will keep you hooked till the last. Every episodes ends in a cliffhanger teasing you to watch the next episode. And the cliffhanger won't be disappointing you in the next episode, since they really matter and bring a lot of change to the story. In overall, the story part was really great and well done. Animation (10/10)Now lets see.... CG animation is not very welcome in the anime world. But some anime has tried and have taken the risk, which mostly ends up in a failure (Talking about berserk here, and any other shitty CGs). It's mostly because that the CG animation was unnecessary for those kind of anime, or else the moments were too stiff and weird for the standard 2D anime audience. But Land of the lustrous has brilliantly used the CG animation for themselves. Taking up the CG animation, in my opinion, a good choice for this anime. It's because a lot of things in this anime cannot be animated normally by 2D animation. There are too much refractions of light in the characters hair (Especially Dia, just wow her hair is awesome) ( and there is Sensi..... One last man). Also, not only the fight scenes, every normal moment is precise and smooth to the extreme. The cameras are angled in such a way that they can cover everything around the scene and not miss even the slightest detail. Not only the necessary characters in the frame, but even the ones not focused for the scene are animated smoothly (they just dont stand there, they move) and this will keep you entertained and not get you bored of the scenes. There is always something to notice, whether it be Dia acting cute or some crucial element related to the story. And the camera moments are just wow... Done to the point that you feel you are actually playing a game on 120 fps. Even the grass is animated beautifully, you can never see such an awesome grass animation in any other anime. The backgrounds are hand drawn, but in such a way that they would suit the CG animation and won't feel out of the place. They were beautifully combined like an alloy ( ͡° ͜ʖ ͡°).There are more to talk about animation and I can go on and go on. There are no mistakes in the animation, and i feel that it was a right choice made by them by choosing CG. TL;DR : you wont be disappointed from the CG of this anime. Sound (8/10)Just like the story and the animation, they did an excellent job on this part too. The BGMs really matched the scenes and the overall settings of the anime. They are sometimes calm when they need to be, humorous, and heart throbbing when they need to be (during​ the fights). The VAs did an excellent job, and their voices really matched the characters and their personalities. Heck, the way the characters speaks (talking about their tone) changes as some of them go under drastic changes. It was just, great. Characters (8/10)Every characters are unique and always interesting in some point. Some are funny , some are calm and they all have unique characteristics (or should i say, chemical properties?) which can be fun to know about. Some characters also undergo drastic changes which keeps the story on the pace. The characters were really memorable, cute and adorable. (Hugging them would be "hard" ( ͡° ͜ʖ ͡°) ). Overall (8.8/10)I would highly suggest you give this a try. If you like something interesting, if you are familiar with CG animation and if you like chemistry of minerals, then you should give this a try. Even if you hate CGs, just give this a try, this is CG animation taken to a whole new level. Everyone should try this anime! You might like it you know! This will really "reflect" on you ( ͡° ͜ʖ ͡°). I just love the community made puns, they really make me "crack" into laughter ( ͡° ͜ʖ ͡°) .

*spoiler-free review* Expensive ornament people battle cotton balls The immediate thought when you see CG animation on the tags of an upcoming anime is "UGH, goddammit, once again a studio cheaps out and goes to the cheapest form of animation that will undoubtably look terrible and be full of inconsistancies." I'm not going to say that's a wrong thought to have, but Houseki no Kuni must have been the boy who, growing up secretly CG, heard what all the cool kids say about the CG kids and drempt of being the best CG anime ever to prove them wrong. And it is. And it does. Eventually you have to realize that this works in CG just because of its style, you can't come across that sparkly feeling as well with traditional animation and Houseki no Kuni has more sparkles than a goddamn glitter convention at a pride rally. The hair is phenominal. Each main character in this anime is themed around a certain gemstone, that's the whole thing, and their hair is made out of the pure stuff and it looks goddamn great. Of course just because the art is good doesn't mean the animation itself is good right? It's probably choppy, bland, and terribly shot? No. It's not. It's great. Shocking once again, Houseki no Kuni goes above and beyond to create fantastic action sequences in CG unmatched by any of its kind, collecting style points as it goes. There are times where it looks better than several traditional animated sequences i've seen, even. The use of color is so fantastic sometimes the shots look straight out of a professional's canvas. Of course that isn't to say the animation is as solid as the skin of its characters. It's definitely a step in the right direction in terms of how CG can work when implimented well, but sometimes it just looks so awkward it's hard to shrug off, which is a typical CG problem. It doesn't just do CG well, it does it right where all others have failed- but it still has similar, albeit smaller shortcomings. The world it takes place in is unique and complex, constantly being explored, even if it does seem a bit bland on the surface like the characters do. All the characters look very similar besides their eyes and hair, which isn't a problem for most people but it's definitely a pet peeve of mine. They also act a lot alike and none of them aren't particularly likeable until quite a ways into the series when actual character development and growth happens. And when it does happen, oh boy does it happen. Main Character Phos has some of the best character progression and development I've seen in a while; it's incredibly entertaining, sad, and mesmerising to watch. A few other characters are pretty good too but not nearly as good as her. Some of them are pretty poor comparatively. The story is decent, but I wouldn't say it's amazing. The execution of the visual style really works during action sequences and plenty of eyecandy value, but sometimes it makes the pacing seem awkward just due to the storyboarding, affecting the story itself. Not too much as it is still pretty good. Besides the animation and characterizations being the most surprising aspect, the sound is the strongest, constantly running perfectly parallel to what's happening and always feeling appropriate. The theme song is so fitting it's magical. Overall Houseki no Kuni proves CG anime can be good all while establishing itself as one of the most unique anime experiences of the year, despite its shortcomings.

Visually stunning with excellent use of CGI. The art style is pretty unique and the story is mysterious and intriguing. The characters are lovable and their development throughout is notable. I love the hints of science and buddhism. The mood and setting it creates is very surreal if you allow yourself to become immersed in it. I aslo grew very fond of the opening and especially the ending theme. I can't wait until the next season! 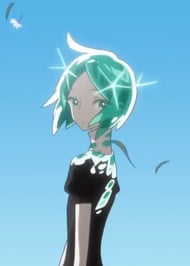 Land of the Lustrous PV 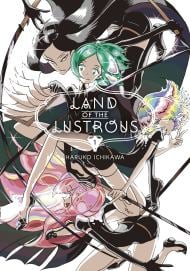