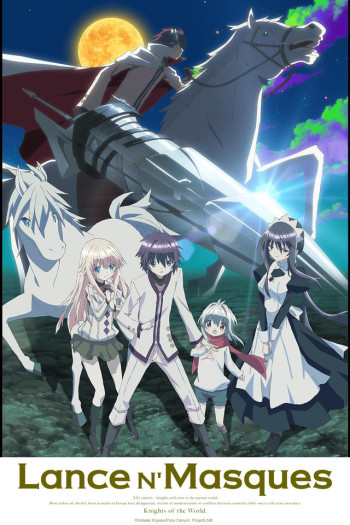 Why all the unreasonable hate?

I haven't written many reviews, but I felt it was necessary to write one for this because there seems to be an awful lot of hate for this series, but no one has actually bothered to explain why.

Basically, it's a fun story about a young knight in the present day who suffers from 'white knight syndrome', i.e. whenever he comes to save someone in their time of need as a knight should, he often goes a bit over-the-top on the courtesy and chivalrous aspects of knighthood. It follows said knight (called Yotaro) and his interactions with a young girl called Makio whom he saves, whilst in his knight garb. The driving force of the plot is essentially Makio's unawareness that the hero 'Knight Lancer' (as she dubs him) that saved her was actually Yotaro.

Now I'm not saying this is the best show ever, by any means, but I'd say it is a solid 6/10, arguably more like a 7/10 for most of it (though there certainly are slow/dull patches, as with most series). Although it has serious sections, it isn't a thriller, or an edge-of-your-seat adventure filled with dramatic twists etc. etc. etc., it's just a nice, fun, modern-day fantasy adventure(ish) series. Some of the more astute criticisms of it that I've seen are that it has a lot of plotholes and that there is not much character development for several of the characters. I have not really noticed any particular plotholes or weak character development, but as I've already said, it isn't the type of series to deeply analyse and critique based on the strength of its writing. It's just meant to be fun.

The other main reason, and seemingly the main source of hate for this series, is the art style. It is admittedly a little weird, and most of the cast have very childlike faces, so it is often difficult to gauge the age of the characters, but to me at least, it doesn't seem bad enough to warrant the level of apparent hate towards the series. It isn't as though the animation is particularly bad, and it is not hard to simply look past the art style, so it seems that this is more an excuse people have been using to explain away their unwarranted hate.

As with any series, I would say to watch at least the first three episodes before judging or criticising it, as with Lance N' Masques in particular, it really doesn't seem bad enough to deserve the ratings it's getting. On anime-planet at least, it hasn't gone above 2 stars the whole time it's been airing... something around 2.8 or 2.9 would be understandable, but the current 1.8 just seems ridiculously low.

Also, a disclaimer - I've seen a lot of bad anime. I would not consider this one of them.

I'm at the 2nd episode so maybe I'm judging too early, but this anime is complete horse dung.   The story has gaping holes in it and the characters are all thrown at us with no development whatsoever.  There is no "plot" and it's not like it's a comedy anime (with no plot), because there's no humor. The sound is relatively boring, but the animation is okay.  I've definitely seen better animation though.  As of episode two - don't bother watching this anime.

I first know of the series is because of the opening song, then the character design and cast made me decide to give it a try.  Due to the fact that it's by Studio Gokumi, I didn't expect much from it in turns of story, character developement, or anything serious.  I started the series with an idea of watching just another moe loli/shota anime, which wasn't that far away from the actual content.

Too fantasy orianted, not having much logical plot, and the setting itself doesn't seem real.  There is a severe lack of explanation in the world setting, like how horse can turn to half human half horse, how the weapon are actually forms, or how combat system works.  The fact that will power/the power of love overcomes everything is too cliche to be use as the solution for everything.  Even though the whole story is tie together by the same character, the first half of the series is only use to introduce new character and show how each character's personally are like.  The story is forced to be wrapped up for an ending in the 4 episodes, which leads to very fast paste, information dump 4 episodes; where the viewers are suppose to just take in whatever information, explanation, and solution that are revealed in the last 2 episodes, then cheer for an happy ending.

Ok quality.  Have parts that are badly drawn, but the action scenes are ok, but way too short  The character design seems to be the reason for some of the distorted arts, the head to body ratio is simply too small to make it not look like everyone looks like 12 years old, with the exception of few intentionally older looking characters.

As mention at start, I started this series because of it's opening, which I enjoy listening to, and didn't skip it once.  The lyrics of both opening and ending fit the mood of the anime, which is a plus.  The voice acting is decent for all character except that most of them sounds like 15 or younger, though might be true most of the case, but it's a painful to have to listen to high pitch voices 80% of the time.  The sound effects are ok, used in needed section.  The only weird sound is the sound of the horse, which is never explain why they sound like that and why they can transform to human.

Not counting in the art design, all the character are pretty bad.  They're one-dimension, with linear personality, and linear desire.  That's not saying all character need to be complex, but having all character being very simple, doesn't make interesting interaction.  Most of the interaction is similar: supporting characters gets into trouble or creates trouble where the main character have to deal with; on few occasion it is the other way around where all supporting characters are there to save the main.  Also, a lot of the decision made by characters are spontanous, which is the cause of majority of the issues in the story.  It's hard to fall in love with repetitive characters throughout the whole series.  Not explaining much of the setting also leads to the character's action to seem irrational.  However, the main issue I have personally towards some character is how they seems to be complete pedofile and everyone seems to be fine with it.  Having romantic feeling between 15 years old and a 7 years old seems ok to everyone; there's even one knight that looks 15 who starts to have feeling for a 40ish years old female knight when he's much younger.  If these things doesn't makes the characters look weird, I don't know what will.  If not counting the strangly popular age-gap couples in the series, other things like a 7 years old being called the mother by a 12 years old is sure the most atrocious character relationship in a series.  There are some decent supporting characters in the show that makes it fun to watch at times, but overall, every characters are far too out-of-this-world to be likeable to me.

Will not recommand to anyone, unless people enjoy loli and shota to an extreme level that can dismiss anything that's happening in the story.

I guess the animation and sound are ok . But what the hell is that crap story and character? Can't even finish 1st episode this sound soo boring and stupid.

Ok, to be fair, I only watched 4 episode before I drop this series. It was standard and predictable. While it might have some potential of developing great story, I'd rather read the light novel than watch the anime, were I only want to know the story. Anime adaptation has a horrible record in adapting LN anyway.

The art, oh, it was unbearable! Not only that it was not stable (the characters were not drawn consistently), it was also... also... very much not my cup of tea. I'm biased, yes, who doesn't :| Seriously, the father of the MC (who, I guess, already in his 30s or may be 40s) looks as young as the MC!!! The fact that all the characters, except the 2 serious looking oji-san, looks so child-like doesn't help to build up any atmosphere.

Fair enough, the sound effect so far were quite engaging. I don't particularly like them, but it was suitable for the scenes

No comment on this, I have not watch enough to have ellaborate opinion. I'm not against the characters settings, but it's not my favourite (I can't even say I like them).