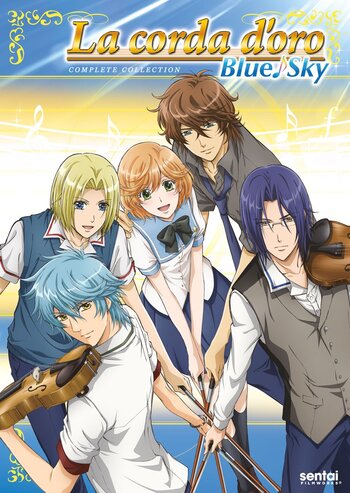 This anime came up in the on demand one day and I decided to give it a chance.  I've had a few adventures into the reverse harm genre and I figured I'd at least give it a try.  From what I have heard, a lot of people seem to love the first series made by it and while this is my first look at it, I can see why some might like it.

Being in band and playing the piano some has left me with an appreciation for music.  Especially classical music that is well done.  I have some fun with shows like this and I love music being the center when it's done well.

A violinist who is seen as a prodigy recieves a note as she seems comfortable.  Her small town doesn't have much of a competition it seems, but perhaps she truly has a lot more talent.  This note and a few tickets lead her and one of her friends on a ride towards the Seiso academy.  Of course, this school is the setting for every La Corda series.  There she is roped into going into a national competition for recognition as the best in Japan.

Is this a good story?  I would say it's a good idea.  The bigger story is resolved mostly by the end and I can't see any reason that it would be a problem for me.  The execution is a bit messy, with big plot points waiting until the end to actually make sense.  Each group gets a good enough exposure to show the general problem and why they want to win.  Then the issue gets resolved and everybody is friends and in love the the main character.  That's what usually happens in these after all.

I have rather issues with the pacing.  The pacing varies from problems causing playing problems for the main character to people sulking for about half or all of the series over something that could have been solved if they just talked properly.  Otherwise, the show did at least keep the main plot.

You can't really say every character counts.  Every main school competitor counts in this case.  Besides Seiso's four string ensemble, the other schools get very little in individual development.  There's a central character or characters to focus on and it leads to what will turn out to be the conclusion.

The main character is okay.  She doesn't seem to have a lot of control, but she does what she has the talent for in the end.  And while it pulls the Amnesia ending of not really choosing, I found it okay for what period of time it covered.  It left a lot open and I'd be willing to see some expansion if it every became available to show if she would choose a character or not.

The others in the Seiso ensemble are bare bones most of the time.  Ritsu basically has one or two things that really matter and are repeated.  Kyoya basically gets annoyed at not being allowed to choose a lot.  The cellist basically is friends with the cellist from another school and just accepts after people prove their skill.

The rest of the groups vary in exposure and they get enough in my opinion because of how long the series is.  I wish there was more, but they did what they were written to do for the anime.

The show looked rather pretty for a slice of life show.  It was very stationary most of the time and the movement wasn't exactly as fluid as an action show.  It was acceptable and I think a lot of other shows would have done a lot worse on a budget like this.  The sections where people see the visions of the fairy are interesting and do provide a bit more than the reused dorms and city.

As for sound though...  the classical music is nice.  The ending theme is kind of pretty as well.  I can't really tell you any other background music that really kept me going.  It was passable and it was fluid while watching, but after an episode was over...  I couldn't really remember much of the music beyond the ending and the music used in the competition.

The voices in the japanese track, which I watched, were okay.  Nothing really stuck out as it grated me, so that's usually an okay thing.

I came into this series without having watched the original.  It was a decent anime without too many problems regarding the main plot.  The side plots and character development needed work, but at twelve episodes, it was very nice.

Notably, I did try watching the original after watching this review.  Perhaps it is because I like the formula used in Blue Sky, but the original one just couldn't keep my interest.

I really like this anime. This is one of the best animes I have ever seen, content wise. There was no inappropriate stuff, no explicit fanservice, it was just all-around good. The characters lack a little bit, and the animation can be a little choppy, but the music alone is worth watching. Anyway, I definantly reccomend.

I didn't enjoy most of this anime.  The storyline wasn't bad and the music was good.  However for a music anime, it didn't feature that much music, especially in the first half.

The biggest problem I had with this anime was my dislike for most of the characters.  Daichi was a bit of a pervert, when Kyouya gets hit in the face Haruto basically says he deserved it because blaming the assult victim is okay.  Ritsu seems to just use people and not really care about anyone.  Nia is creepy, getting in Kanade's face and sneaking into her room and watching her sleep.

However I have the biggest issues with Kanade Kohinita.  She's extremely annoying and weak willed.  She spends alot of time sad, depressed, upset or crying.  Most of the male characters fall for her in two seconds and she constantly has to be defended and protected. Sei Amamiya tells her he basically stalked her, wants to fall in love with her and that she's now his girlfriend..... and instead of continuing to practice like she should be, she spends the rest of the day on a date with him. She's also suppose to be this fantastic violinist but she's constantly making mistakes through most of the anime.

The two characters I did really like are Kyouya and Chiaki.  Kyouya was a good character and I liked his growth but his watch dog/ lap dog behaviour towards Kanade was rather pathetic.  Chiaki was talented and entertaining, he also had a nice story and I like that he was honest about Kanade instead of basically wrapping her in a bubble like everyone else.

I wish these two characters had most time focused on them, instead of how they relate to Kanade.  I also wasn't a huge fan of Kanade's ring's 'magic powers' that created the illusions when they played music.  I also wish it was a little more music focused, there seems to be alot of teenagers just hanging out; eating, having a BBQ, at the beach, on a date etc.