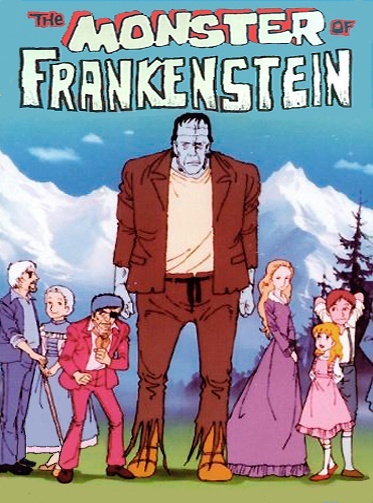 One dark and stormy night, Dr. Victor Frankenstein and his assistant completed their finest achievement: a monster constructed of spare body parts and given life. However, when the creature breaks free Dr. Frankenstein flees, leaving his assistant to be marred by their creation. Now at home with his family, Dr. Frankenstein tries in vain to forget his failed experiment but is haunted by visions and memories. And when freak accidents and deaths begin to occur, he realizes that the Monster of Frankenstein may very well still be alive...

Also known as THE MONSTER OF FRANKENSTEIN. Kyoufu Densetu - Kaiki! Frankenstein is a masterful animated adaption of the classic Mary Shelly novel. Although not entirely beholden to the source material, there are only a few deviations from the original.STORY: Overall, it has a mature tone and and the audience are treated with a great deal of respect. It is slow-paced, focusing on drama and storytelling over more modernized anime tropes and fast-paced action. However, in my opinion this helps add to the atmosphere. If you are looking for a love letter to the classic horror... this is the anime for you!ANIMATION: Monster of Frankenstein is beautifully hand-animated. Though riddled with imperfections, it is a masterpiece of its time with breath-taking use of light and darkness and a few strong visuals that utilize minimalistic animation techniques to deliver a powerful sense of threat. Such as when the monster's face first emerges from the shadows and the audience is given a strong sense of the imposition of the beast on its creators -- along with its own bestial confusion. That said, if you are the type of person who cannot see beauty in the imperfection of hand-drawn art and expects everything to be crisp and perfect this anime is not for you. It is a time-capsule and a piece of art, not a piece of commercialism.SOUND: The sound is what you would expect from a classic Universal Monster film, with classic horror stings and a non-invasive use of music. Throughout the course of the film there are a couple of powerful stings that help add a strong sense of drama to the scene. However, to really appreciate them one must first invest themselves in the film and the plot to appreciate them. If you're expecting a magical rock 'n roll adventure, this anime is not the one. Nor will its soundtrack draw your eye from League of Legends, WoW, or whatever Hentai game you're currently balls deep in. The sound is there to carry the story, not define it. The voice acting is handled well. In the English dub, most of the voices are handled by the same voice actors from Robotech -- giving it a family friendly feel, while still capturing a sense of urgency during the more intense scenes. Generally, good performances all round.CHARACTERS: Drawing strongly from the original, we receive classic depictions of most of the guys you would expect. It is also nice to see the inclusion of Victor's family, and a daughter. However, since much of the compelling elements to this film is watching the development and slow decent of these characters, I will keep my commentary here minimalistic. The short version is that the characters are human, relatable, and imperfect. Inspired characters from classic film and literature depicted IN the anime medium, rather than reinvented to fit into anime expectations -- and I personally find this very refreshing.OVERALL: People will accuse me of having nostalgia goggles and whereas you may not think me rating this anime 10 across the board was fair, I think its spot on. Although the animation has some mistakes and the sound is not a master symphony or brimming with J-Pop enthusiasm, it balances perfectly for what this film is supposed to be.And therein is where its strength lies. If you are a fan of the horror genre or Frankenstein you're going to love this retelling. It is respectful, interesting, and anyone can watch it. It has some powerful visuals and scenes (even by today's standards) and a humanity and gloom that modern anime has moved away from. All in all, this is a grand film deserving of more recognition and praise. 10/10.