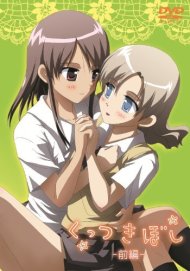 Disclaimer: This is a review of an ecchi show, and will contain scenes from the show. Reader discretion is advised, so if you're young or something lie to your internet so you can read my damn review I streamed this sucker  Here we have- Kuttsukiboshi which means something like Lesbians Intertwined or some shit like that. This is how watching this show went for me   should I watch this? It's only 2 episodes    is they fuckin? Que? Went down just like that, and here's ya boy Wiru-sans take on it! Story In an un-named apparently all girl academy we have our protagnist Kiiko Kawakami who is special, not because she likes girls but because she likes girls AND has telekinesis. How she got it, I don't know probably in a car crash or something cliche' like that.  This is a secret though and she gotta keep it on the low low We can't let them know our secret.... Which one? Enter her pal Aya who is the only one who knows of her power          Ha! I bet you thought they were fucking....not yet     Of course after some long testing Kiiko gets tired and Aya and her go to rest under this tree  and this is when Kiiko sees the sleeping Aya    control your yuri urgers! Statutory aint worth it Oh it's ok her yuri sensed your presence  This embarks them on a quest of yuri love and lust, mostly lust. This anime is pretty fucked up, with themes ranging from Yuri, Incest, Rape, and Telekinesis. Those should probably never be added together but they are for Kuttsukiboshi. Now the story is bland as all hell but I actually wanted to see the problems the characters faced resolved. This is a Yuri fest & nothing more nothing less. (That rhymed :) Story: 3.5 Animation  This anime gets a worthy mention because it was written, directed, and animated by one guy, Naoya Ishikawa. The first episode was even sold at Comiket.  Although it's just lesbian smut it looks better than some shows that have a team of people working on it       surprise footjobs, lesbians, incest, explicit sex what else do you need? What was this show about again? Somebody has powers right? For this all to be done by one person color me impressed, this still does not make up for the fact that the animation doesn't stand out. This series took two years to finish and honestly doesn't do too bad in the aesthetics department, however it never goes beyond mediocrity  Animation: 5 Sound What sound? All  I remember hearing was moaning and the occacional "You aren't wearing any panties?" The ending themes for each episode are generic pop songs uterly skippable and forgettable. The tune doesn't even come to mind,  Sound: 3 Characters This story follows Kiiko Kawakami the uke and Aya Saito the seme, strangley enough the uke has the powers.  Kiiko is your normal shy girl with telekinetic powers....Who i'm convinced is a straight up exhibitionsit, either that or Japan is home to many ghost towns.       In comes Aya Saitou. (No pun intended, well maybe) she has the libido of a rabbit on spanish fly. She's usually the one in control and pulling Kiiko into these messed up siuaions, but she knows she likes it right? That can't be healthy for the relationship.    That pretty much explains these characers they aren't very deep if I had to measure it out they'd probably be two knuckles. Although I'm sure they know how many knuckles deep they are  Characters: 4 Overall Lesbians Interwined is a two episode romp that leaves you quesioning just what the fuck happened, why it did, and was it worth he two episodes. In short it isn't, but if you are into watching lesbians plucking on the Clitar I guess you could put up wih this show. After all the show gives a pretty good summary of itself   Verdict: 4.5    Reccomendation: Skip it Animes that get this rating aren’t really worth your time. They don’t bring much to the table and frankly should just be skipped. However some of these shows have certain elements that might be worth the watch. There is SOMETHING that can be taken from this although in the end it’s still probably not worth it  As always that's your boy wiru-san's take on it. Follow me on my Tumblr and check out my channel on Youtube. And Remember to stay the hell away from woodchippers.

Okay its very clear that this anime wasn't meant to have a plot. Obviously because its only two episodes and the total time of the whole anime is 45 minutes top. It basically is an anime based on yuri, however for the purpose it was made which is just to show yuri content that had a LITTLE bit of a story, it ticks all the boxes. You can't have a master piece in only two episodes anyways. If you are looking for mild; ecchi with yuri sekkusu, then this anime should do it for you for a very short period of time.