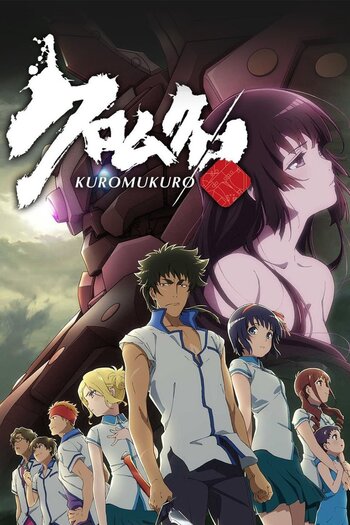 There is actually a specific part in Kuromukuro that reminds me a lot of Eden. The two animes are quite different, however the lead male character in each seems similar to me. Both are in a strange world. In Eden, it's because he lost his memories so the current modern world is strange to him. In Kuromukuro, he was asleep for many years and suddenly wakes up in the present modern world. Both characters have some what similar personalities. Both animes present the person in a strange world theme similarly as well. I think they are a good match.

Guy immediately comes to the aid of a woman[check]

Guy has the ability to use a certain mysterious power [check]

Guy has an opinion about girl’s clothes [check]

Guy and girl are separated for reasons out of eithers control

If these sound like your kind of story then give both of these a try.

If that’s not enough the main male characters in Kuromukuro & Eden of the East both use nicknames. They have strong opinions about using their power for protection. People who appear useless [NEETS and friends/enemies{frenemies}] are not left to die. Abandoning people either because they’re NEETs or because they’ve wronged you in the past is not something the male leads condone. They will help those by any means they possess. Fame and fortune are not their objectives, they are who they need to be.

This opinion is shared with and/or embraced by other characters as the series’ progress.

Minor/secondary characters in both are addicted to technology.

An animal companion is also present in both series [dog in Eden of the East and a ferret in Kuromukuro] who aids the characters in their respective series. They aren’t just there to be cute, though their physical appeal is not to be underestimated.

The whole story can’t be captured on film. You've got to look for the meaning behind every action.

This may be an odd pairing, but I do think these animes have their similarities. The main male character in both somewhat refuses the present time. In Dimension, he prefers to live the way people did before the coils became a part of nearly every aspect of life. In Kuromukuro, he actually is from the past and has a hard time accepting the present. It's not exactly the same, but it does seem similar. The artwork feels similar to. Also, the main male character is paired with a rather unlikely main female character which creates a bit of a rocky atmosphere.

If you like mechs, action, and aliens this is a great watch. You'll be at the end of your seats begging for more by the times it's over. Good action sequences and some good "who done it" type scenarios.

Both both are anime and both seem like high quality. They both have their quirks and other things which may seem meh but otherwise it seems like a excellent opportunity for anime to watch.

In modern Kyoto, Kumi is a college student who moves to Kyoto in order to take over the candy store inherited from her late grandmother. The house accompanying the candy store was supposed to be unoccupied, but there Kumi meets three women named Harami, Mai, and K, and a dog. The four are heroes who were reincarnated from their world into this one. One day the former demon king, who messed up her reincarnation and is now in the form of an elementary school student, appears and asks her to collect the demon king fragments together.