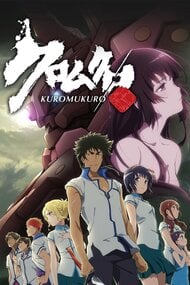 As always when reading my review one needs to understand the genre and target audience for the show. As far as mecha anime goes, this is not "Heavy Object", it's also not "Gundam". That is not to say the story is something new, it most certainly is not. What makes this better than average would be the use of the "person in a strange world" tag. Theme that's been exploited and sucked dry in the movie business has somehow eluded anime on a greater scale thus far. Not that we lack japanese teenagers sent into random fantasy worlds, but I must admit ignorance to a recent anime with a 17-th century samurai brought back into modern Japan. Minor spoilers ahead. As always this is just my ranting and if you believe I am wrong, then it must be true. Watch if: - mecha is fine with robots that look like humans being driven "stick" and somehow still making complex, human-like movements (and not falling on their heads). - you're not expecting a very elaborate plot or setting (if you're prone to "Meh, I saw something similar" you might as well skip this show) - you're ok with the show switching gears between ridiculous and serious every 5 minutes - you do not want to watch another Gundam clone (it will prove to have a refreshing vibe if you are tired of watching Gundam that is guaranteed) Don't watch if: - mecha needs to be at least a tiny bit realistic ("Heavy Object" is recommended for you) - you can't stand cliche, overused comedy gags and inconsistency - you're expecting a show centered around battle and tactics rather then the hero who always magically "saves the day" Much of the above might sound harsher than it really is (that goes both ways). All in all I gave this a pretty high rating, and with only 9 episodes out it might still disappoint in some ways. However, it's not the story that makes it stand out for me, so not much can go wrong there. Story 6/10 We will have our usual "one good robot for the MC + fodder for minor characters" deal here. As always the enemies will have multiple unique units like the MC's and as usual they are connected in some way. On a less common note the conflict is not internal like in the Gundam series, but rather an outside enemy is engaged (much like"Aldnoah Zero"). Also uncommon is the fact the units are piloted in pairs, though the "chosen one" tag is fixed in place, as far as choosing the pilot goes. The FUN part about the story is actually that (at least for the first 9/26eps) we get to see some of the Samurai's adjustment to modern times, in addition to some questions being asked to reflect on. The age of samurai is over, but when someone is needed to sacrifice their well-being for a greater cause of humanities survival, are there still people left with the mindset? Sadly most of the gadgets of the modern world are treated as means for comedy and the explanations the poor guy gets are mostly useless. It is still fun to watch, though it could have been so much more. This is why it lost so many points on story for, really, not the obvious generic plot which I would not care for one bit. Animation 8/10 Let's start with what is bad. The launch of the units is. It's horrible. Would have been better if they just suddenly appeared than get shot out of the 1960's-animated, seizure-inducing tunnel. The robots are pretty good (as far as robots and CGI goes, upper tier), and the CGI doesn't hurt your eyes especially with weapons and gunfire. Characters are well animated and even tend to have multiple facial expressions instead of emojis over their heads. It's not perfect, but it's above average. In my book, for mecha - if you can actually watch it and not feel like this is a pre-screener with "CGI-placement spots" waiting to be filled, it's good enough. Sound 8/10 It has explosions. VA is good, watch "Big Order" if you want to see how badly it could otherwise have broken a show. I honestly didn't care for the OP or ED, but I rarely do. Not that it was bad, I just didn't listen or watch at all so you can make up your own mind on that front. There was nothing off about sound and, once again, for this genre that's plenty. Characters 9/10 So far so good. We have a female who actually reflects on her own actions and understands she did something stupid (that's about 1/1000 chance? In anime, obviously). There's the samurai who is acting apropriately stuck-up and stupid, though maybe a bit too refined for someone who never heard of toilet paper. You should not be looking for any historical accuracy in regards to his psyche though, like with the rest of the show science has no real place here. The show will try to tackle some serious issues like a child being asked to kill and moral choices etc. etc. but it is too afraid to really explore any of it. Whenever things might start to get real comedy jumps in instantly to save the day. Not to mention people surviving explosions with your usual "dirt-on-face" (I'm looking at you, scooter-riding baka-combi).  Main point here is that you can relate to some if not most of the cast as human beings. It sounds so simple, but it's something very unusual for this genre and what makes it a little bitdifferent, without also being too heavy for most (aka "Bokurano"). If you are a casual Mecha fan you will probably love it. If you are a mecha veteran there s a high chance you will like it or at least find it refreshing in some ways. If you don't like robots turn off your PC before it bites you and stop reading ;) Cheers.

So far this anime doesn't seem to be grabbing a lot of viewers but the first six episodes have been good. Yes it's a mecha anime, but it has some nice twists and from my experience, is decently differenet from others. Of course, I myself didn't start watching till six episodes were out and I was dying for something to watch. That was mainly because the description/summary on here and on the site I watch the anime on were pretty terrible at explaining anything or grabbing my attention. Well, I hate summarizing stories but I will try here.  It starts out with a rather ditzy air head high schooler who's mother works in this big research facility. The facility is built around two "artifacts" and despite a lot of research, no one knows much about these giant items. One day while the girl Yukina is visiting the research facility to see her mom, large things fall from the sky and one falls near the facility. Yukina touches one of the artifacts at that time and it reacts, unfolding to reveal a naked man who mistakes her for his princess. It turns out that Yukinna is able to activate the "artifact" mech with the man to fight the other mechs or "demons" that fall from the sky just has her lost father once predicted.  Well I'm not sure that is any better than any of the summaries I have read but anyway, moving on.  It's a bit hard to tell if this show will be able to continue strongly. Then again, any show less than 24 episodes doesn't have much hope in my opinion. That's not why I question how well this one will do. This is one of those animes that seems to want to put a little bit of everything in. There is a hint of school life and possible romance, some comedy, action, sci-fi, mechas, demons, person in a strange world, possibly supernatural elements (although it's too soon to tell), history, samurai, etc. Perhaps I'm being pessimistic since I've been disappointed by so many shows the past two seasons, but this could end up being a downfall. On the other hand, maybe it won't.  One of my favorite things about this anime is the person in a strange world part. There are many ways of presenting this idea but the way this anime does it is the way I like. It's unknown whether or not the lead male comes from the past or another similar world (suggested in the sixth episode sort of) but he certainly isn't aqquainted with out modern world. Even though this is an action anime and all, there is a decent amount of focus on his confusion with the rules and objects of modern society. This is also a focus of much of the comedy. I don't like it when they have someone in an unfamilliar place and the character barely reacts to it.  I can't say I'm a huge fan of the stupid main character thing. Is it just me or is it becoming more common for the main character to be the worst or be really dumb? Maybe it was always like that, but it feels like it's getting worse. Actually neither the lead female or lead male are portrayed as being especially good at anything which is slightly annoying.  Well for now I give this anime an 9 overall, although I like to give high ratings at the beginning if the show has any promise, so if it doesn't follow through, my rating might drop much lower. We will just have to wait and see.

This anime is only 5 episodes along at the point I'm writing this, but so far Kuromukuro is one of the anime I get most exited about watching new episodes for this season.  It's really entertaining. So far the story is interesting.  I don't want to spoil much but ~spoil alert~ there are some cool connections between demons and mechas and samurai.  I may be a bit biased because I like anime with samurai and historical references but I thought that  the idea of mechas being demons and also some sort of thing for samurai to use was a cool exuse/reason to bring mechas into the plot.  I don't care if it's a little rediculous or far fetched, there always has to be SOME weird reason for mechas to appear, right? I haven't watched a mecha anime in a while, so it's fun to see sword fighting mechas and also pretty funny in a way.   IDK about you but I think sword fighting mechas are AWESOME and if you don't this might not be your thing. The characters are good too.  At first I didn't like the MC Yukina because she just seemed too helpless and aggravating and useless but I have come around a bit.  The samurai I like alot.  I also think Yukina's mother is a vry interesting character with a multi faceted personality.  Actually, both of her parents are i ntriguing, especially her dead dad.  He looks like a dick in the flashbacks even though he doesnt say anything mean so I think there's going to be something fishy there.  There's also a monk uncle and a little sister, who are very well rounded likable minor characters who have roles in the plot. Overall I enjoy watching this show.  I dont think it's ~the best~ but It's good and I always look forward to new episodes and watch them before others.