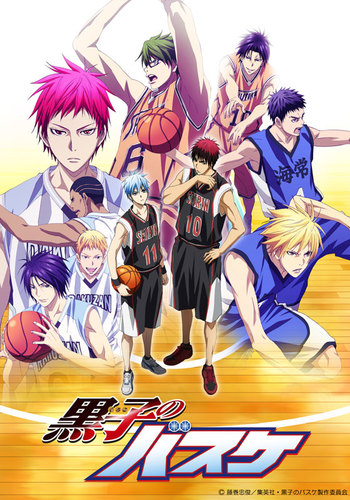 The battle between Seirin and Kaijo finally begins. Seirin tries to secure their victory by striking first, but Kise unexpectedly begins using his Perfect Copy at the start of the game, demonstrating his overwhelming strength. With their start ruined, Seirin's attacks get them nowhere. The unsteady team must be returned to their feet. Riko calls for a player substitution. Furihata takes Izuki's place on the court! Though Furihata is nervous playing in such an important game, the substitution produces surprising results...

I'm Just Playing As Hard As I Can

Stay Out of My Way

I Will Give Them to You

I Can't Help But Laugh

In Order to Win

Sakuragi has hit an all-time low. During his last year of junior high school, fifty different girls rejected him, the last one choosing a basketball player instead. Thus it’s no surprise that in high school, Sakuragi beats up anyone who dares utter the name of the sport. However, it’s not long until he meets Haruko, a beautiful basketball...

Like Kuroko's Basketball 3, Slam Dunk is a very enjoyable basketball anime which also follows a high school team that aims to be the best of Japan. it has some differences though, Slam Dunk it’s more realistic (and you’ll even learn some rules that tend to be overlooked!) while Kuroko relies on having some characters with special skills to make the matches more exciting. Anyway if you liked Kuroko make sure to check Slam Dunk, you'll enjoy it.

Like Kuroko's Basketball 3, Haikyuu is an adrenaline-pumping anime that will keep you at the edge of your seat. It focus on a team and the bonds between their members as they strive to be the best team in Japan. The sports may be different, but you must not miss Haikyuu. It's as enjoyable as Kuroko!