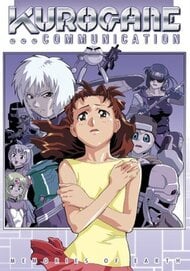 Kurogane Communication takes place in a post war Earth in which our main character Haruka is seemingly the only human left. Robots roam the Earth. Haruka is surrounded by her band of robot helpers and friends. Cleric the genius. Reeves the cook and very handy. Trigger, the bite sized short tempered robot that likes to shoot things. Angela, who reminds me of Major Kusanagi from Ghost of the Shell for her looks and fighting. Spike a helper robot that is very attached to Haruka. This series is light hearted even when the party faces diffult tasks. Haruka is a very sweet and caring girl. Always optimistic. She sometimes gets herself in sticky situations. As the story progresses new developments occur about the world that they live in. What happened to all the other human beings? We get some background on Haruka and Angela. This is a late 90's anime and it's obvious with the art style. I personally like it. The animation is clean. I never thought they they cut back on any episodes as far as quality. It's good for a tv series. The sound is good. I enjoyed the opening and closing songs. Kind of cutesy, but it really fits with Haruka's personality. The correct music is used depending on what the situation was in the show. Danger music for suspenseful parts and so forth. Most of the characters are not fleshed out. We only get background episodes on a few characters. Haruka being the main character is strong. Her personaity really stands out in the series and carries it. She's just an innocent and sweet girl without a bad bone in her body. I rooted for her all the way. Overall this series was a good watch. It actually felt short. Yes, each episode is only 15 mintues long. If you are looking for something that is on the lighthearted side. Nothing too heavy. Something that is positive and optimistic. Than check this out. It probably won't be the most memorable show you will see, but it's a nice watch. I can't spoil it, but the ending was good.

~Belated Secret Santa Review~ Story Haruka is the only known human survivor in a post-apocalyptic world, and she is raised by a 'family' of intelligent robots. Early episodes focus on their struggles to stay safe in an unstable world full of killer robots and unpredictable environmental activity, and it also raises the question of whether robots can ever be replacements for human family and friends, as no matter how advanced and intelligent they are, they don't age or require water to survive, etcetera. Later on, more of a running story develops, as Haruka learns that there may be other humans still alive, and the party set of in search of a new, habitable land. There they meet other intelligent robots, who unfortunately don't give them a warm welcome... Considering Kurogane Communication is a series of short (half length) episodes, it did a fairly decent job of telling its story in the time available to it. It even had time for a beach episode! Some parts were rushed, particularly the ending, but I've seen far, far worse. Overall, I really enjoyed the plot. Characters It took me a long time to warm to Haruka – at first, all she seemed to do was wander off without telling her robot guardians, only to end up in danger and rely on them to get her out of it. I guess she's only a child, and her situation isn't exactly ideal, but she still irritated me! Less so as the series went on, and the story got more serious. The robots all had very different personalities, and all of them seemed indistinguishable from humans. Maybe a bit too nice to be humans, if anything! Spike looks and acts like a boy of roughly Haruka's age, and he acts as a childhood friend, with his desire to protect her coming across more as a crush than programming. Former duelling robot Angela has a distrust of humans, but Haruka eventually wins her over, and she ends up as the series' tsundere character (and is apparently advanced enough to be able to blush). Gentle giant Reeves, intelligent if blunt Cleric, and the rotund machine gun-wielding Trigger make up the rest of the main cast. All very likable. Then, there's the series' main villain. Though the ending was quite rushed as already mentioned, his motivation for doing what he did came as a surprise. I'd have liked to have seen him get more screentime and development beforehand. Animation and Sound I usually associate shorts with poor quality animation, with some from recent years even being made in Flash! Kurogane Communication is not one of those, it looks fairly decent, if nothing to write home about. Plenty of variations in the robot's character designs where they were made for different purposes, but also a lot of similarities between those presumably made for the same duty, which was a nice touch. The OP and ED themes (as well as Haruka's voice) were provided by Horie Yui – absolutely amazing. Soundtrack was decent enough, again nothing spectacular. Overall I don't usually bother with shorts, but this was an enjoyable series, so thanks again Niko!

Kurogane Communication is a light sci-fi adventure which with different handling would make a wonderful piece of fiction. It involves numerous interesting plot elements, such as post-apocalyptic, conspiracy, artificial intelligent, mystery, adventure, and some more. Unfortunately trying to fit all that in 24 episodes of 15 minutes each while going light with the dark and violent aspects could only lead to an average series at best. So the basic story is about a cheery little girl, the apparent last human left alive on the world, living a normal life with a group of robots programmed to protect and take care of. She is living in an area that once was a big city but now is nothing but ruins and killer robots roam around, still programmed to kill anything organic in sight. This part is an interesting concept of machines outliving their makers and continuing their prime directive even when the initial cause is long gone. As I said, the way the story is told is very light and thus the above is mostly lost in various silly slice of life moments. It also has action in it, as the killer robots are always on the lookout and there is a tsunami approaching that will wipe out everything, yet these are all nothing but zero-personality plot elements to force the characters into moving along instead of staying in one place for long.The group of robots is practically the most interesting characters for the sole reason they have personality that doesn’t differ too much from humans. Each one has a specific role in the girl’s life and acts as replacement for family, friends or teachers (well that was the reason they were made in the first place). Their occasional chatting, commenting of the reasons the world was destroyed, and the questioning of their reason for being is the most captivating part of the whole show. It is a shame most is lost because of lack of proper duration.The production values are ok for their era; the animation and artwork are doing their work without being too good in aesthetics. Voice acting is kinda relaxed and the soundtrack is making you think this is a silly slice of life for little kids (which is misleading). Eventually the plot turns to a sinister conspiracy regarding the future of mankind (or what is left of it) and there is more action and mystery as it goes on. The resolution ends up being fast and almost un-exiting, leaving you with a fairy tail finale that seems rushed and rather disappointing for the built up seen so far. It is an ok watch, not really bad at any specific area, but it could definitely be something far more thrilling if it was longer and darker. 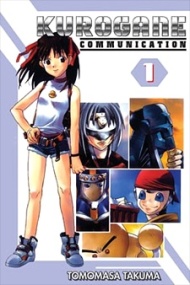