Kuro to Kin no Akanai Kagi. 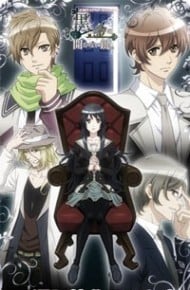 Kanade Katagiri spends her days in her room with dreams of her surrounded by doors. She also lives with her non-blood brother, Ikuto Sonomura. One night a cowboy guy appears to her in her dream, saying that he's her heart's hero. The following morning she decides to leave her room to go and get a haircut. She then met a mysterious man who cut her hair and applied makeup to her face in the park. After she ran from the guy, she was approached by another guy who turned out to be a former classmate, Yukio Suduo. Kanada is a young lady who is just now coming out of her shell and becoming surrounded by guys, what will she do...

Kuro to Kin no Akanai Kagi is based on an adult otome game and is a despicable piece of shit that shouldn’t be viewed by anyone. There, that’s all you need to know. Goodbye and enjoy your life not having seen this garbage. … What, you still want to know more? Fine, but don’t tell me I didn’t warn you. Story Kanade is a total recluse, living alone with her brother Ikuto (hey, don’t worry, they’re not related by blood, so you don’t have to feel all grossed out later!), not even able to leave the safety of her own room. Why, you ask? God knows why, but the story demands it, so shush. One day she finally decides to venture into the outside world, where she meets a hair stylist who fixes her up for free, because that’s totally not creepy or anything. Nothing as romantic as casual facial scarring And what do you know, she turns out to actually be a total beauty. After that, she bumps into a former classmate who has to be one of the most obnoxious flirts ever and they somehow end up walking home together. Her brother sees them, gets jealous and boy, does it only go downhill from there. You see, this OVA adapted the one route in the otome game where you get together with Ikuto.  And that route is apparently built entirely on sexual assault. Because nothings says “I love you” more than almost raping someone and then guilt tripping them into a relationship. The amount of idiocy that lead to the ending can not be comprehended by sane minds. Trust me, I tried and failed miserably. At this point it might also be a good idea to mention that there are a couple of sex scenes in this show. Not the ‘slow transition to dampened windows, suggestive imagery’ kind either. No delicate parts are shown, but expect some boobs, naked butts and thrusting action. It’s basically just one clear dick-into-vagina visual away from being a hentai. And don’t forget that they’re technically brother and sister. Incest wincest, amirite? There also seems to be some time travel or magic involved, but fuck explaining that. Stories don't need to make any sense, obviously. Animation Lazy and totally generic. The characters designs are like those in any other otome game adaptation. There is little actual animation as the show consists mostly of panning shots and quite a few still frames with people talking over them. At least the boobs were very  bouncy. Budget well spent. Sound I can’t remember the background music at all. The voice-acting was okay, not spectacular or anything. They actually got some pretty nice voice-actors to do the roles. So if you’re a fan of Satoshi Hino or Kousuke Toriumi, you might be able to sit through this OVA. Might. I still wouldn’t recommend it. Characters Ho boy, is Ikuto the biggest prick ever. He’s abusive, overly jealous and very possessive. Believe it or not, otome game producers, telling a girl she can’t talk or even look at another guy is not the epitome of romance. Hard to believe, huh. His characterization was pretty inconsistent throughout the story as well. What do you want him to be, director? An innocent and shy boy with a rather unhealthy obsession with his sister? Or a total asshole who has no qualms with raping said sister? You can’t keep switching personalities between scenes and expect us to somehow care for your character. Look at that smug face; someone needs to ram a cactus up his ass Not that our MC is any better. Reverse harem protagonists are bland by default, but Kanade is not only completely devoid of any kind of personality, she also does incredibly fucking stupid things. No, girl, the problem is not that you rejected his feelings after he tried to rape you, it's that he fucking tried to rape you. Dear heavens me, never has anyone missed to point so facepalmingly hard. It’d be pretty sad if it weren’t so damn idiotic. The rest of the cast also consists of annoying douchenozzles. Because, you know, having likeable guys in an otome game would be like having the ending of Neon Genesis Evangelion make actual sense. There’s the hair stylist with no sense of personal boundaries and stalker-like tendencies, the former classmate who can’t seem to take no for an answer, the female friend who is a total bitch for no reason… And well there was also a teacher and another friend. Sadly enough they didn’t get enough screentime to come off as douchebags, but I’m sure I would have hated them as well. Overall Pretty much how I feel after watching this I feel like I didn’t word my disgust enough in this review, so let me reiterate. There is nothing redeemable about this anime. Kuro to Kin no Akanai Kagi only knows how to be either stupid or downright offensive. Rape is super okay, guys! It’ll totally make her realise her subconscious feelings for you! Assault her a bit and she’ll definitely fall in love with you! Quality logic! No. Just no. Fuck this. Don’t watch it if you have any sense of moral or if you simply like your anime to not be complete and utter tripe.

I'd have to say I'm a sucker for these kind of romances. I was rooting for the little brother all along, but I guess you could say I'm kind of a weirdo. The anime had the kind of feel that was shown in "The Perfect Girl Evolution" and "B Gata H Kei" (which happen to be to of my favorite animes). Story- It could have been better, there wasn't much of a plot besides the yandere like relationship that went on between Ikuto and Akanai. There wasn't much to sympathsize for and not much o a background story as to why they live alone together in the first place. Animation- To be honest, I found the animation to be the best category of them all. The artist deserve a high five. Angles were good and much thought was put into the animation of it all. It defiantly matched the roots of its origin. Sound- Voice acting went well, very mediocre, nothing good, nothing bad. Characters- Now here is the worst category of them all. No characters had a back story. Three of the four boys were barely even seen but twice. Even the main characters were not showed in detail. They must really want you to play their game. Overall- It wasn't bad, but it wasn't good either. It had it's highlights and it lowlights as well. The idea it pursude was great, but they went about it all wrong. Such a rare case in an anime, but such a bad way to start it.

Adaptations from otome games suck more often than not, but when an abusive relationship is added to the mix then there’s basically no hope for the show. Kuro to Kin no Akanai Kagi is far from being an exception to this rule but, how much did it suck? This show is about a hikikomori who, after having a weird dream, decides to leave her room and go outside. So far there’s nothing out of the ordinary, but shortly after she’s approached by a creepy hairdresser who offers to cut her hair for free. Anybody with a little bit of common sense or sense of self-preservation would have run away from him really fast and called the police just in case, but she actually takes the offer. Surprisingly (or not) she’s a beauty and since then she starts to inadvertently attract the attention of some scum guys. Based on this one might think this is a mediocre show, but things get a lot worse from this point onwards. We get a few extra characters introduced like an annoying dude that tries to flirt with the MC or her teacher which seems to not know what personal space is, though what takes the cake is the development of the step-brother. He goes from being caring to her to downright molest her. Way to go show. Not everything was crap in this anime though. The animation, the background music, and the voice acting were decent. In short, avoid this show like a plague. You won’t regret it. This review was written for DAMC Anime Marathon #5