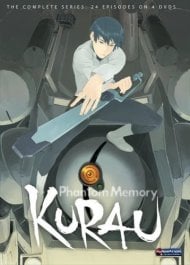 As scientists explore a new form of energy on the moon, an experiment gone awry brings the lead scientist's life crashing to a halt. In a freak accident, his daughter Kurau is engulfed in the energy and becomes the mysterious entity known as Rynax; a pairing that endows her with new superhuman abilities and a new personality. Years later, Kurau is using her unique powers to make a living as a bounty hunter, but the corporation has not given up on this new form of energy and will stop at nothing to find her. Now, Kurau must protect not only herself, but her Rynax "pair" named Christmas, a soul mate more precious to her than life itself. Can Kurau and Christmas find peace for themselves and the Rynax?

Kurau makes an honest attempt at being a heartfelt action/drama hybrid, but shoddy character development and slow pacing prevent the show from actually succeeding. Although steps are taken to give each character a back-story, the results more often than not feel forced and unnatural. A lot of this can be attributed to the fact that the characters are somewhat unoriginal, and have little attributes to differentiate them from other anime characters. A lot more can be attributed to the absolutely hideous dialogue. At its best, the characters' exchanges do nothing but develop the plot. At their worst, they do absolutely nothing at all. For those that think I’m exaggerating, here’s a sample exchange; names have been changed to protect the innocent (ok, not really, I just can’t remember them). Frank: Jessica! Jessica! Jessica: Frank! Frank! The voice actors try their hardest to squeeze meaning out of this atrocious writing, but in spite of their efforts, the resulting characters lose a significant amount of personality. Cardboard cutouts and a slow-moving plot could have been serviceable in something more action-oriented, but Kurau seems utterly determined to be tear-jerker. Numerous scenes abound in which the characters bawl their eyes out at the utter sadness of their situation. Weeping in anime is always a double-edged sword. If the audience genuinely cares for the characters, then a scene where a character cries can be extremely effective (One Piece, Aishiteruze Baby). If, however, this is not the case, then the results are often more laughable than anything else (Alien 9, Saikano). Unsurprisingly, Kurau falls on the shitty end of the fence. This is a shame, really, because the series really does have a lot going for it. Animation is almost always more than competent; action scenes are well handled, the character designs are good, and the series uses color exceptionally well. Moreover, the soundtrack is very good as well; I'm pretty sure that Kurau has the best ending theme that I've ever heard. The story has an excellent initial premise and as a whole is much more creative than most series'. However, despite these strengths, the project just doesn’t come together well enough to actually recommend. I think it says a lot that I trudged through the entire thing, despite never really enjoying a single moment. The plot has the kind of ambition that really could have sparkled if the execution had been better, but in the end the glacial pace and pedestrian writing sink the show.

StoryA few days ago, I was in a store and noticed the cover for the Kurau DVD; on this cover, Kurau stands in a martial arts pose, holding a sword. Sadly, I shook my head at how drastically misrepresented of an image that was; Kurau is definitely, definitely not an action-oriented series by any means.So what is Kurau Phantom Memory really about? The main storyline follows Kurau and her “pair”, Christmas (seriously, that’s her name), as they run from the global police, travel the world, and search for other Rynax. What is a Rynax’s “pair”? Imagine the bond between twin siblings, and then amplify it by a factor of ten; without a pair, a Rynax is consumed by loneliness and feels incomplete. Meanwhile, in a separate side story, we follow the commander of the global police task force as she doggedly hunts Kurau, while at the same time uncovering the reason behind her orders.At its core, Kurau Phantom Memory is a meditation on loneliness, and the joy of finding someone who is able to free you from it. From divorce, to the death of a family member, to the loss of a pair, almost all of the characters seem to be recovering from a personal tragedy. Even though the series is generally uplifting and focuses on how to overcome inevitable pain, it’s that same inevitability that helps keep an aura of melancholy around the cast.The aspects that most impressed me about the series are its mastery of mood, and how it deftly weaves its core themes into the story. These aspects turned what could have been a rather rote sci-fi series into something deeper.I suppose I’ve painted a rather grim portrait of Kurau’s tone and feel, but the series also has some light moments and isn’t always serious. Even though the story could be touching at times and heart-breaking at others Kurau still manages to contain the occasional light moment and humorous.Finally, a note about the ending: I really, really liked it. I’m sucker for well done transcendental finales and Kurau’s seemed to stick with me long after it was over. Any anime that can keep me up at night thinking about its conclusion has something going for it!AnimationThe animation is average; it’s nothing special, and I’ve seen worse. The lighting and shading looks good, but the backgrounds are rather generic. I also wished some of the character models could be little more unique or detailed; for example, the two primary protagonists along with the Global Police officer all looked remarkably alike and were hard to tell apart during the close-up head shots. Of course the two protagonists are basically twins… but still! SoundI wasn’t terribly fond of the opening music, but I absolutely loved the closing tune; I think it fit the tone of the series perfectly. I had that song stuck in my head for days and it didn’t bother me! The voice acting seemed good and the little bits of music thrown into the series worked well.CharactersThe protagonists are basically good people with complex problems. Kurau is torn between protecting her Christmas, fulfilling her father’s promise to leave her body and helping other Rynax desperately in need; meanwhile, Christmas is just beginning to understand how the world works and desperately seeks to protect Kurau. Even though I thought that the Rynax’s super-powers were a little over the top, because of the well-done characterization I was still able to identify and emphasize with Kurau and Christmas.  The supporting characters were likewise interesting and complex. We even begin to understand the villain of the show and why he does what he does – always a good sign in any anime.Now, any series that has a main character with strange super-powers has the potential to “cop-out”. In other words, since a protagonist may have a strange power that they themselves don’t always understand, it becomes easy (and cheesy) for the creators to get them out of ridiculous situations by simply inventing a new “power”. While Kurau Phantom Memory usually managed to avoid this, the creators couldn’t help but let the protagonists off the hook with this cheesy method once in blue moon; luckily, this happened so rarely that I was able to forgive them. I do think it would have been nice if the Rynax weren’t so powerful and had to rely on their human body a bit more often, though.OverallI really enjoyed Kurau Phantom Memory. Its ruminations on loss, loneliness and identity are interesting and thought provoking. The characters are mature, complex and empethetic. Throw in a really good ending and you get a series I can wholeheartedly endorse. Just be forewarned: Kurau Phantom Memory takes its time, and often lingers on character development. For those who want a more lighthearted, fun or action-packed experience, Kurau Phantom Memory should probably be avoided. For me, however, it was a breath of fresh air and a shining example of why I watch anime!

This series has two almost completely different shows fused together into one; a high impact action/scifi show, that dominates the first half of the series, and a drama focused around scifi with action spliced in, which is the latter half of the show. Whether or not you enjoy this show will, in my opinion, be determined on how well you believe they did in each of these areas. For me, the first half of the season was extremely up and down. The action in it was fairly entertaining, but the drama they attempted to put in between the action scenes weren't quite there yet. In the latter half of the season, they seemed to lean more on the drama, adding more side characters and depth to the main ones. This worked out much better, although it took a lot away from the action. Furthermore, the soundtrack in the latter half of the season seemed much better, emphasizing the emotion in the series. The main issues I found in this series had to do with the lack of explanation given to certain key areas of the series, and the voice of Christmas, on of the main character. Several very important things were either not explained at all, or explained just in passing, not in depth, and in the middle of an action scene. This annoyed me somewhat, although not completely. Other than that, the voice actress for Christmas gave me a head-ache. That being said, this series, over-all, is fairly good, extremely face-paced and not very emotional for the first half of the series, and more involved in the second half. Worth watching if you enjoy this type of series.