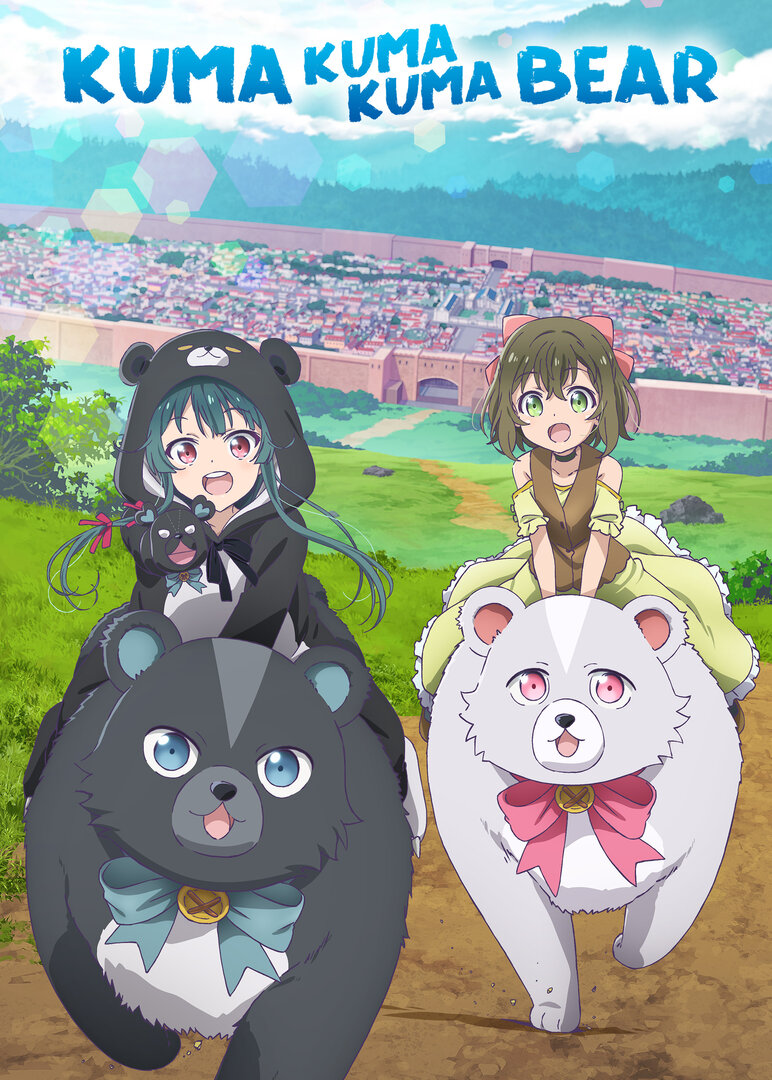 The protagonist Yuna is less violent than in the source and everything is cleaner.

Further the anime doesn't follow the source in detail but more roughly.

It's not a bad anime but it would seem it's more for a younger audience than the novel.

If you want to watch something where it seems bad things happening is impossible, this may be exactly what you're searching for.

Disappointment.  That’s the best I can say for what had first been a curiosity in the anime world.  I was taken with the premise of Kuma Kuma Kuma Bear.  In the end, I was taken.

There is this weakness in the plot due to an annoying tendency in all the episodes, including the botched effort at the pilot program.  This is expressed in one word.

Yuna is no Rocky Balboa who can take a beating, get up, and give the opponent a bit more than that right back at him.  The usual fight sequence has the obnoxious foe berate Yuna for that ridiculous costume with the black and white bear-head mittens then .... BOOOOOM ... one KO'd formerly obnoxious foe.  Even the battle with the black viper, Yuna has the commonsense to realize the huge snake's skin is impenetrable, call upon her ever increasing arsenal of built-in bear-themed weaponry, offer herself up as a meal, and blow-up the monster from the inside out.  And she comes out with nary a hint of digestive juice mucus on her.  Must be nice.

It was one thing I always noticed in the Pretty Cure scripts.  The cures always had the time they had their girly stuffings beaten out of them, have them stagger back to their feet, refuse to lose, and happy endings ensued.  This stuff doesn't happen in Kuma Kuma Kuma Bear (and, on an unrelated note, why was I forced to type 'Kuma' three times?) and it gets powerfully boring after a while.

The characters are rather shallow, seeing that their only reason for existence in their RPG realm is to make Yuna the super-amazing heroine in that totally idiotic bear suit.  Yuna is depicted as the one person on this planet that is ultimately qualified to go it alone ... and needs to learn the lesson to interact with people to achieve results that authentically matter.  This theme is the only redeeming quality to the whole series.  That, and it's family friendly with only the random scary monster popping in (and out, with a little [microscopic, really] bear power).

As I write, I am still eagerly awaiting the next episode, where Yuna takes on a kraken.  If there is a knock-down drag-out battle between super bear-girl and super octopus, fine.  That's entertainment.  But if this is 'how to make Takoyaki in two easy steps,'  ...  there seems to be little time left in the season to prepare something else that would make for something that would awe and amaze.

I can't help but pan this anime.  But I'd love to write an update in a few weeks giving K3 Bear the highest praises, if they get Yuna beat up a little en route to a smashing victory for the ursine species.  It would be a feat for EMT Squared to pull this off, but five stars is five stars.

How's that for motivation?

If you have a young daughter or sister that you want to share an anime with, this is the best one you could ever watch.  Its light hearted, fun and non-violent. If you are looking for an anime to smile away the boredom of a day, this is the anime for you.  The best character is Yuna the bear girl all other characters not developed.  The one episode that Yuna is not the primary character is the worst episode.  There is really no action (she easily beats everything), no romance, no real comedy its just a feel good everything going to be alright with Bear everything.

The story of Bloody Bear. Yet another somewhat chill isekai series. This time about a girl, who is transported to game-like world with special Bear gear set costume, which gives her very broken powers. It plays fun with this Bear theme. Everything on the costume set in shape of bear makes spells and attack stronger. For example, fireball in shape of very cute bear is more powerful for MC, than regular fireball. Even further anything with name of bear or made with idea of bear is stronger for MC. Main protagonist saves and befriends some people, saves kingdom, city, etc. becomes a legendary hero admired and feared by many. It’s pretty straightforward slightly adventurous, slice-of-life isekai with cute bears and some funny moments. There is no big complexity to story, but unlike in the Kamitachi ni hirowareta otoko series, there are some conflicts and misunderstanding between characters. MC is in the beginning very secluded in her life, but by getting isekai-ed she learns to appreciate friendship and interactions with other people.

I’ve wrote review for the manga sometimes before. Manga is better than anime. Overall, it’s an ok series, but not very exciting to watch. It’s bit better than the forementioned similar series. There is going to be a second season. I’m not super excited about that, but I’m going to watch it.

Didnt expect much from it, i thought that ill get bored on the first episode. but i enjoyed it a lot. its a very sweet and heartwarming anime to watch. its very sweet and adorable also its relaxing to watch. but i would love to see more fighting scenes, because yuna is too overpowered. She would just kill the monsters in a short amount of time and thats it. But anyways i still like this anime. And yeah its clearly made for kids. but you can watch this to when youre relaxing