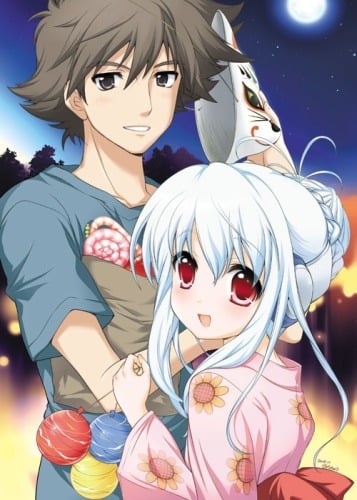 This was a decent little anime considering it only have one episode and would probably been a tear jerker had it been more in depth. The characters were very cute especially Flower. It was sweet he kept her with him in some way after she passed. I kind of wonder who her old owner was and why he disgarded her :/ Watch if you like!

As the OVA is only half an hour long, it's hard to make any really elaborate descriptions regarding its quality.

To start, the OVA mainly focuses on two characters and their day-to-day life and activities, to the exclusion of everything else. The OVA barely touches on other details, but it doesn't need to, as the goal of the OVA is to develop the two character sufficiently in half an hour. At the same time, it makes a point not to explicitly depict any of their backgrounds or histories, instead choosing to give the viewer just barely enough information for them to make a reasonable guess as to each of the character's respective pasts. Had this been a full-length anime series, this might have turned out to be a shortcoming, but for a single episode OVA, this method of storytelling works like a charm, and the viewers do feel some sense of attachment to the characters by the end (or at least I did). The ending itself, though a bit short for my taste, is a satisfying ending in its own way.

Overall, this OVA does considerably well given its length. If you're looking for some decent drama, but lack the time to watch a full-length series, give this one a shot. I'm sure most of you will be pleasantly surprised.

EDIT: I have since upped my rating of this OVA from 7 to 7.5. I went back and took a look at several of my other reviews where I also handed out 7's, and felt that Kowarekake no Orgel was at a slightly higher level.