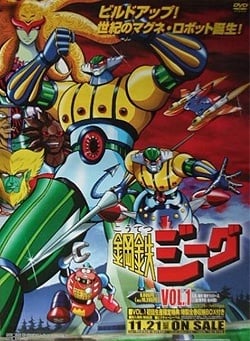 Time traveler Go Nagai strikes for the fourth time. During his wondrous adventures in the future he found out how anime would start to focus a lot more on martial arts in the next years, as mecha shows would slowly start loosing ground to a new genre called fighting shounen. After he defeated the Daleks along with Dr. Who and played on a rock concert with Bill and Ted, he returned to his present back in the 70’s and immediately started his new most original show. In this series from the future (whose main idea was again never copied in the future) we have the lead robot combining from a set of different parts, all made with magnets in their joints. The lead pilot is NOT using some aircraft which combines with other parts but his own body transforms to the actual head of the robot. The robot is also using martial arts a lot more than it uses special attacks so each battle looked a lot closer to a wresting match with huge robots and monsters. When in a pinch, it can separate in different parts and hurl them at the enemy, so in a way it looks like what that pirate clown named Buggy in One Piece is doing. And thus you get another show with a unique style of fighting, whose closest imitator was a comic relief pirate clown two decades later.

For some reason this series never came to my country, unlike all other classic mecha, so I got to watch it when I was well into the medium as an adult. Thus my impression is not as strong as it was with all others I grew up with but I will try to think like a kid while viewing this. Ok then, let’s analyze it main elements.

1) The lead robot design. Man, it is so weird. The head looks like a cobra, it has a yellow chest with stripes, its limbs look like oversized gloves and boots. Also, as original as it is to have magnets instead of mechanical joints, it still feels rather silly. Jeeg looks like an ugly toy while Mazinger or Getta Robo felt a lot more menacing and heroic in the strict sense. Also, the lead hero transforming to a cyborg, which in turn transforms into an ugly head is not exactly an exciting thing to look forward to. Original but otherwise yuck.

2) The monster designs. They are also weird and ugly and I say that in a bad way. They look like stone wrestlers or gay-looking golems. Maybe less lame that those saucer-themed ones in Grendizer but still I don’t find them threatening or alien or ancient as they should be.

3) The wrestling battles. Those were indeed more interesting than the usual parade of special attacks, but they still don’t last that long before resorting to the same old laser beams. I even wondered why they didn’t fire the lasers right away instead of punching and kicking for ten minutes. Although they are supposed to weaken the enemy so he can’t duck the attack in time, I still never understood, how can a mountain-tall monster avoid an attack that has the speed of light? And anyways, it’s not like there haven’t been any previous martial arts in mecha shows; even the very first ones were wrestling with the enemy. It’s just that they tried a little bit more in this series without ever going to uncharted lands with the concept.

4) The story. It was bizarre. There is an ancient civilization of monsters that need a magical bell, which turns a human to a robot head. LOLWUT? It is also far less complicating and exciting than Grendizer and one would expect something more elaborate from a studio that keeps making slight variations of the same idea. And the hero is again one so there isn’t much interaction amongst major characters. Some bike races are cool but just don’t help to make him seem dramatic or more humane than (I am trying not to laugh while writing this name) Duke Freed. And anyway, how does a BIKER know how to use MARTIAL ARTS? This is mixing too many things without flavoring them nicely.

5) The main music theme. Man, it must be one of the longest ones in history to last 2 minutes. It has a nice rhythm too but the lyrics are hit-or miss. Words like “Bam barabara brara bam” sung by kids is not exactly cool.