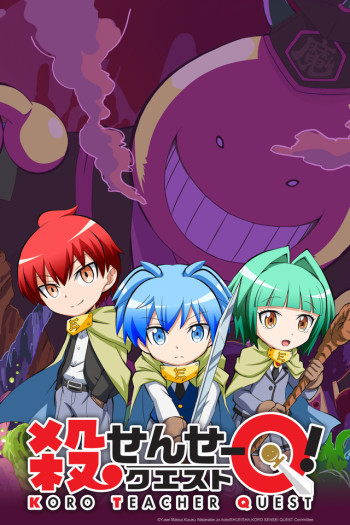 Koro-sensei Quest! Episode 1 - The E Class and the Big Bad

The misfit E Class at Kunugigaoka School of Magic gets a new teacher: the Big Bad! How will this party of level-1 newbies ever manage to defeat him?

The E Class and the Big Bad

The Ruins of Tribulation

It's Not a Job, It's a Calling

Three hundred years ago, the demon king Giri was sealed away by a magician wielding a powerful summoning magic known as Guru Guru. Now the seal is beginning to break, and the only Guru Guru user left in the world is twelve year-old Kukuri, a naive girl whose magic tends to backfire a lot. The king sends out a proclamation offering a large sum of money...

Both anime play with RPG tropes and are chibi-style comedies, featuring plays on already established characters and archetypes. Both are parodies.

The button appeared out of nowhere. There weren’t any signs NOT to push it… so the solution is obvious, right? Is it a trap or the start of something new and exciting? The crews of Re:ZERO, Overlord, Konosuba, and The Saga of Tanya the Evil will find out when they go from their world to another and get stuck in… class?!

Both of these are short-episode anime with mostly episodic episodes. They also both have a cast of chibi-fied characters that appeared in other shows. And of course, they are silly episodes and don't actually reflect the tone or characters their main series are based on. If you liked one, you'd probably like the other.