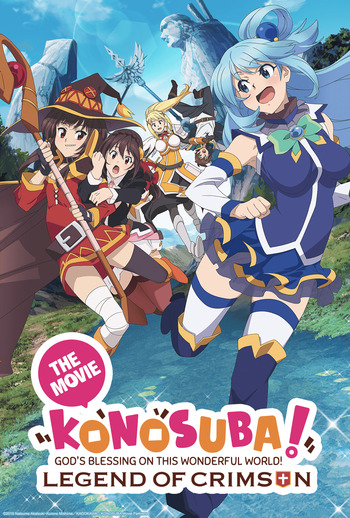 If you like KonoSuba the series you will like the movie.  It revolves around Kazum, Megamim and Yunyun.  Agua and Darkness(my love) are minor characters.  Megamim's home villiage is fantastic full of great characters.  The gangs humor is on mark.  There where many laugh out loud parts in the theater.

I thought the animation was a little less than the series, the sound was about the same, the story could of brought more of Agua and Darkness(my love)into it.  The characters finished basically were they started no real relationship development.  I'm kinda on the fence on relationships in KonoSuba on one hand I have a favorite on the other hand I like how they play off each other.

If you have watched the preview Konosuba story, then this will be the best thing you've seen in a long while. The jokes are prefect. The set-ups are perfect.

I love the show. I love this movie.

It's Konosuba at it's most. More character development. Funnier characters. Great story. Cool moments with the traitors of the Devil King. I couldn't ask for better.

In this review, I'll try to avoid direct spoilers at first, but there are some major plot spoilers under the Characters part of the review. If you haven't watched the movie and wish to go in 100% blind, don't read this review.

Kono Subarashii Sekai ni Shukufuku wo!: Kurenai Densetsu is, of course, the anime film adaptation of the original parody isekai series, the anime series of which began in 2016, animated by Studio Deen (Fruits Basket (2001), Fate/Stay Night, Log Horizon 2). For Kurenai Densetsu, which from now I will refer to as "KD", the main studio was switched from Deen to J.C. Staff (Toaru Series, Kaichou wa Maid-Sama!, DanMachi) so there is a noticable change in artstyle and animation from the original anime series. In my personal opinion, I believe it was a serious improvement (no offense to the work of those at Studio Deen, the original anime was still really good quality) on the animation of the original series. I believe that KD did a lot right, and I will go on to explain my feelings in this review.

I rated 8/10 for the story, which is my lowest of all 4 catergories, which really explains just how much I like it, huh? At the beginning, the story started out with a familiar scene outside the city of Axel, whith one of the giant frogs, which is, of course, a big gag in the series. That sense of familiarity shows just how willing they were to let fans know how faithful a new team of artists and animators were to match the work of Deen, and Natsume Akatsuki, respectively. Then, it shows the cloud of Megumin's explosion in the distance, and mentions the quest that they had just messed up, as usual, like we saw in the original anime and the source material. After this, we see another familiar bath house scene, similar to those in season 1 of the anime before cutting to a bar scene that had characters in the background talking about the exact quest that they had failed. This is a good representation of Konosuba's world building, something that I've always found to be done well in this series, and also something I wish more isekai series' would do. Following this, Kazuma talks about Megumin, Aqua and Darkness in a way that describes much of their characters in the most brief way possible. I feel that introducing the characters, even though we're already familiar with them, is a good gesture. Some people may have forgotten a bit about them in the gap between season 2 and KD. The way the plot develops is something I liked too, especially with the humour behind the misleading letter that Yunyun didn't read all the way into, before using this miscommunication to introduce the Crimson Demon Clan in a way that was both stylish and hilarious. The only reason why I couldn't give it a 9 or 10 is simply because I felt that the movie could have been longer to slow down the plot development just a bit, because I feel it was just a little bit too quickly moving.

Although the main studio, as I mentioned just before, was J.C. Staff for this movie. There were actually crew members from multiple other studios who worked on this movie, as you can see in the movie's closing credits. I didn't catch all of the names of each studio, but right now, off the top of my head, I can remember that David Production (Jojo no Kimyou na Bouken, Hataraku Saibou, Enen no Shouboutai) and WHITE FOX (Steins;Gate, Re:ZERO Kara Hajimeru Isekai Seikatsu, Goblin Slayer), among others, were involved in the inbetween animation of KD. That said, with a main studio like J.C. and other great studios working on the inbetween animation and other visual aspects, I'm obligated to say that I believe the animation and artwork in this movie is wonderful. You could almost say that it was God's blessing. The animation of characters is highly fluid and lively, you can tell that it was crafted with so much care to make KD visually astounding to adapt to a new style of animation and artwork. In particular, when Aqua is talking down to the members of the Devil King's army that the party runs into in the forest outside the Crimson Demon Village, the way she moved as she spoke was highly characteristic to her hot-headed and hilariously over-the-top personality, along with Megumin's excited expressions and gestures as she shows the rest of the party around her home town. I don't want to spoil anything in particular, as I said, but that final fight scene? Hands down, the best battle I've ever witnessed in an isekai anime, as funny as Kazuma's antics made it, it was also extremely beautiful from standards of both animation, effects and artwork. Now, on to my talk about artwork. Even with a change in artstyle, the appearance of the characters was still highly faithful to what we saw in the original anime. The way the new characters appeared was excellent; their outfits were all different (save for the girls in the academy uniforms) and suited their personality (nice Jotaro looking hat, Mr. Megumin's dad) very well, establishing their roles in the clan on first sight. The way the Devil King's army was designed was pretty characteristic to an evil member of a demon's army, and let's just say Sylvia's character design was... interesting, cough, cough. The backdrops and architecture of the movie were also very attractive too, they felt fluid, welcoming lifelike at calm moments, and felt like epic battlegrounds during the final battle of the movie. I think, literally, the only way this could have been any better was to have even more renowned studios doing artwork and in-betweens. Like, imagine Kyoto Animation (Suzumiya Haruhi no Yuutsu, Hyouka, Violet Evergarden) doing backdrops, their specialty, or ufotable (Fate/Stay Night: Unlimited Blade Works, Kimetsu no Yaiba, GOD EATER) doing in-betweens in the battle scenes, or even some of the CG effects. Even without anything truly incredible like that, the animation and artwork in this movie was perfect.

I feel like sound design is always a difficult thing to talk about, but something about the sound in KD just felt so very... real. I had to give it a 9. The sound effects; explosions, smashing boulders and swords clashing, all felt so realistic for such an obviously unrealistic setting, and just hearing them was a pleasure to the ears. In other mediums of sound comes voices, and voice acting. Of course, Konosuba, to me, his always had a great cast, both in Japanese and English. The movie hasn't been dubbed yet, I believe, but the anime has, and I think the dub cast pulled it off well, but since this is the movie, I won't talk about that. Of course, main cast Kazuma (Jun Fukushima, also voices Yoshihisa Manabe in Kotoura-san), Aqua (Sora Amamiya, also voices Akame in Akame ga Kill), Megumin (Rie Takahashi, also voices Emilia in Re:ZERO Kara Hajimeru Isekai Seikatsu), Darkness (Ai Kayano, also voices Shiro in No Game No Life) and Yunyun (Aki Toyosaki, also voices Yui Hirasawa in K-ON!), who had a spotlight in the series for the first time, have all retained their voice actors from the original series, along with all of the other recurring characters. The voice acting, including normal dialogue, expressions and screaming (of which there is a lot, thanks Kazuma and Aqua) has always been well-done, and the series is basically known for it within the anime community.

As I mentioned prior, every recurring character has a faithful design, and the same voice actor, and the new characters also have good visual designs, but what I haven't talked about is personality (apart from Aqua), every recurring character has that same signature personality; Kazuma's "lazy NEET without a backbone", Megumin's chuunibyou-esque vibe, Darkness'... pervertedness, and as I mentioned, Aqua being over-the-top and hot-headed. Of course, this is all familiar to anyone who's watched the anime. But one character that interests me here is Yunyun, previously a minor character. In the movie, Megumin talks about her past with Yunyun, and we see how Yunyun saved Megumin's sister, Komekko, in order to spare Megumin from using her life's savings of skill points that she was saving to learn Explosion magic, which was never explored before this. Yunyun undergoes a decent amount of character development, where she talks about saving her friends, and introduces herself to Sylvia, the enemy, without hesitating or being embarassed, while helping Kazuma's plan to take down Sylvia with the Railgun (I guess J.C. Staff likes railguns). Megumin also shows some at the end of the film, when she considers abandoing Explosion magic to learn Advanced magic, but Kazuma convinces her not to by unleashing "one final Explosion".

And what we saw after that explosion, in the cloud? I hope it leads somewhere. ;)

Then the ending theme played. And I was fulfilled with everything I just saw.

With numbers in mind to each catergory, I rate Kono Subarashii Sekai ni Shukufuku wo!: Kurenai Densetsu a 9.3 out of 10. Brilliant film.

Amazing movie, revolving my favorite character megumin and her village. Not only was the story really fun and lighthearted but it also advanced the plot with a new demon king general. 10/10