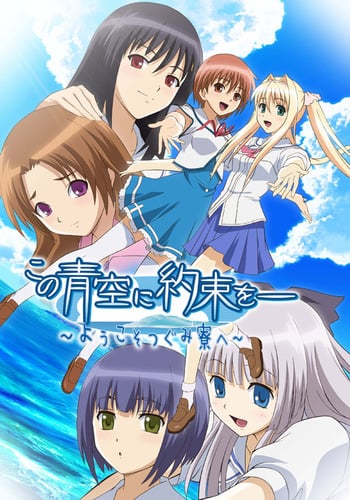 I'm writing this review moments after just finishing the series.

To start things off, this is a slow-paced romance series.  For those of you who like to feel in touch with the characters you're watching you might find yourself enjoying this anime.  Sadly, that's all there is to enjoy.  The plot-line, the devolpment, the voice-overs, the music... everything... just average.

The story begins with the main character in his bedroom staring - possibly in shock (doubt it) - at a women in underwear sleeping in his bed.  Seemed interesting enough to keep me watching.  To keep from spoiling I'll just continue on.   The male lead lives with 5 other women in a dormintory that is destined to be absolved due to everyone leaving under circumstances that are unknown.  What we do know is that they live in on island that is being evacuated, for again, unknown reasons.  I've probably just forgotten or the writers put it in so poorly that it didn't stick.  However, what the writers do let you know is how utterly sad everyone is.

And that's the entire story.

Yup, that's it.  The show is made up of 5-6 arcs (I didn't care enough to count or keep track) each arc is 2 episodes long and singles out one of the many female companions the male lead has at his domintory.  As amazingly interesting as that sounds *Sarcasm* they make it even more interesting, and migh I say, original, that each and every girl has some deep relationship with the main man.  In every arch the main lead will go through some sort of emotional experience with that girl, leading you to believe theres romance.  Theres none.  None.  Absolutely none.  NADA.  There is no romance in this visual novel.  They give you the feel and reason to believe that there is some...but there's not.  Calling this a romance show is just because the type of viewer that will enjoy this show will probably enjoy romance as well.  They attempted something that might be considered romance in the last arch before the last episode, and they even had the nerve to make me hope for it.  Nay, I pleaded for it to be true!  But, alas, the show falls short as the only true romance is for the building they all live in that has just as much history told in this plot line as any of the characters.

This show is pack full of plot holes.  So many things weren't explained.  Waaaay to many.  I've never even seen a show that decides to show you something that could possible turn into something else, then just toss it out the window just for giggles.  In fact, I think each arch had things that were told or shown but never explained or given any real detail.  I'd rate the story a 1 just for this reason alone, however, that would be unfair due to the fact the main story itself was still told fine.  The only complaint about the story itself is that each arch jumps around time lines.  Many people will find it confusing and will probably quit half way out of annoyance.  I wouldn't blame you and won't scold you for doing so.

With all that said, I enjoyed watching this show.  They rap you in  with hopes and keep you watching with more hopes.  This show is like a biat, the more you watch the more you think something will come from it.

I take critism well, so if anyone else has seen this show please comment.