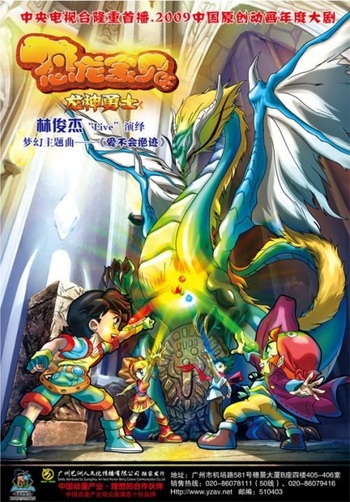 If you're looking for anime similar to Konglong Baobei Zhi Longshen Yongshi, you might like these titles.

A boy and his friend set out on a quest to find a magical plant that will save his tribe from starvation.

Yuta is a Japanese boy who hates modern day technology outside of the cell phone. When his mom gets hired at the Dreamland Japan headquarters, he is forced to move. Unbeknown to him is a hidden land called Web World, the land connecting all computers, phones, televisions, and more. Yuta receives a mysterious message on his phone. When he touches the message, he is sent inside his cell phone to the Web World where he meets Web Ghosts Pit, Pat, and Pot, more commonly called PiPoPa. Together Yuta must team up with these Net Ghosts and new friends to save the Web World from the web ghosts themselves and outside forces which wish to use it to take over the entire world.