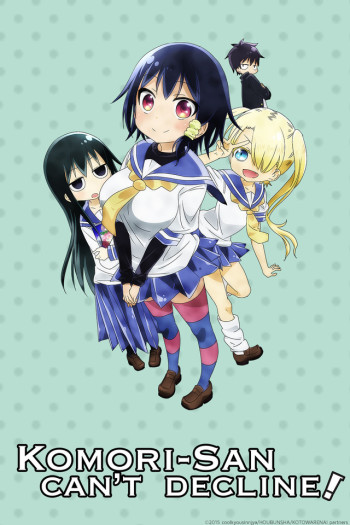 Its really bad, boobs shouldn't jiggle that much. If you liked the spirit of this anime, watch Dragon Maid instead (Made by the same author). I suggest you read this show's manga instead though, it isn't too sexual.

I belive this anime merely exists because they wanted to animate boobs, because that's literally all that happens. The animation and music are not bad, but this has no story whatsoever.

Very cliche set of settings and characters. Nothing much different from your usual slice of life, but the fact that each episode is short and sweet gives it a better score. Worth the watch if you got like 30 mins to spare.

Komori-san Can't Decline is currently a popular 4 panel manga with 34 chapters. When I first watched it, it had potential, but it really fell through. The anime is only 20 minutes long and thank god for that.

STORY: The main character is a girl who can never turn down a request. Not because she is unable to say no, just because she want to do it. An interesting concept but it isn’t really funny at all. With only 2 minutes per episode I wished the intro wouldn’t be 30 seconds or at least change it up every so often. With every episode really being 1 minute and a half, it is hard to get a full story in. While they try to do that, they only manage to do a half decent job.

ANIMATION: only ok/good. Everything is very clean and interesting eye color.

CHARACTERS: There is some character development, but not enough to really change anything. Interesting character trait.

Komori-san Can't Decline is a series of shorts based on the original 4-koma manga by the same guy who made I can't understand what my husband is saying ; which also got 2 series of shorts. Knowing that, I already didn't have very high expectations, since  I can't understand... was just "ok" in my book, and Komori-san's episodes are even shorter than that: 12 times 2 minutes (-30 seconds for the ED). So you could always take a short look for yourself.

The premise of this series is decent enough for a comedy: a girl who will do anything you ask her, because she just can't say "no". However, after 3-4 episodes of seeing this, I was quite tired of the idea. There also isn't anything else to this series to make it more interesting, so watching this became boring quite fast.

Of course I didn't expect much for a "story" in these shorts, because they're made to only give some jokes. However, the fact that over half of them didn't even make me chuckle was a real pity, and makes me lower the score too.

I'm just glad the creators didn't put in any H-ideas with this kind of premise.

There's Shuri Komori, the girl who can't decline, two little girls, and one guy who wants to be relied upon too. And that's it! We don't know much else, except for the fact that they're kids who are in school. Very original setting, isn't it?

Another big problem I had with this series was the character designs: two little (flat-chested) girls and one little guy who seem to be about 12 years old, and they're supposedly the same age as the big-breasted, tall and strong Komori? We don't really get to see any other characters, so we can't use anyone else for reference, but it just felt weird.

Pretty much what I would expect from this kind of low-budget series of shorts. Nothing special, nothing too bad. Pity they put a little too much animation budget into Komori's chest though, they didn't need to make it wiggle that much in this kind of series.

There are tons of better shorts out there, compared to those this is a mere waste of time with nothing good about it (although nothing is especially bad either)