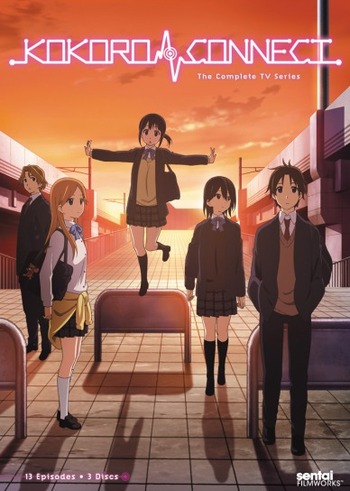 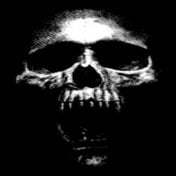 The one good thing I can say about Kokoro Connect is that it's direct. "Boom: here's the characters, with a little intro script for each." "Boom: here's the weird, contrived gimmick to add suspense." "Boom: here's each caracter's personality trait (yes they each get just one) and each of their "big secrects"." And finally, "Boom, here's your inter-personal relationship drama, complete with love polygons and the like."

The gimmick of body swapping, or whatever, is pretty stale, but this show does try to be a little more realistic about it in regards to the character's reactions. The animation is bland, the music ranges from forgettable to irritating and the voice acting is standard drama fare. But what really drags this thing down (even further) is the characters. What I said earlier might sound like an exageration but it isn't, the show literaly goes through each character and tells you about their "big secret" and their related single personality trait. I've seen a lot of people saying that Inaba was the deepest character, but to me her character was the most flat and stereotypical of them all, voice acting included (and that's saying a lot).

Nothing Kokoro connect does is even slightly original and every one of it's re-used elements can be  found used to much better effect in other, much better, animes.

First Review! Let me know what you think!

When I first heard of Kokoro Connect I wasn't really all that interested to be honest. As from what it tells you it's that it's a whole series that revolves around five high school students: Taichi Yaegashi (our main lead), Iori Nagase, Himeko Inaba, Yoshifumi Aoki, and Yui Kiriyama who all form a club called the "Student Concial Society" (or StuCS for short) which is a paper for the school.

I thought there was no way an thridteen episode series could be carried on the cliche of switching bodies. However, I quickly came to reilize how dead wrong I was when I got absolutely hooked onto the show after a friend reccomended it too me and I gotta say, it was easily the best show summer 2012 anime season.

It's too bad the synopsis only speaks of the body swapping phenomenon that starts when Aoki and Kiriyama claim to have swapped bodys for a breif second that night. Of course nobody believes them until Taichi and Iori ended up swapping bodys. It's here that the show started to get interesting and I couldn't help but laugh at there predicement. There's many more phenomenons that happen but I won't spoil the laughs and drama for you.

However it's the characters that really steal the show in Kokoro Connect. Each character feels well-written and gets an appropriate amount of screentime. Also for every new phenomenon another layer of these characters would be revealed which helped in making sure not everything felt too forced in and those make those emotional moments hit at the right time.

The animation and art also are steller across the board in Kokoro Connect. I liked the simple character designs and just how great the animation looked for the whole show. The art also looked fantastic thoughout the whole series and while it isn't going to wow you it looked good enough to stare at some of the artwork once and awhile.

I was really suprised with how much I loved Kokoro Connect. It had a great plot, absolutely fantastic characters, and an excellent blend of drama, mystery, comedy, and even some romance. It's defiently worth a look if you sound interested. Now, if you excuse me I'm off to go watch some more anime.

Kokoro Connect is an anime that doesn't exactly leap out at you upon a first glance but should you decide to watch the series then you shouldnt be disappointed. It was one of the first anime's I have watched and it is still a favorite of mine.

Lets start with the best part, the characters. Not one of these main characters did I truly dislike which was a first. For a romantic anime it is important that character development is accomplished well and they hit the nail on the head with this one. The fact that I could sympathize with each of the characters to some extent; made them very memorable (particularly Inaba :3). Whilst some are weaker than others they each have different trait s that makes them very unique

The animation was good but it was not the highlight of the series. Nothing really wrong with it just not as appealing as its other features.

The main theme was nice and catchy got in my head for a couple days anyway the voices were good too and matched the character personna well.

The story had no clear ending as to what may happen and I love that in any series. The inpredictability kept me engaged quite well but also the surrealness of the whole heartseed concept. The fact that the phenomena came in three separate forms also kept things interesting.

The pyschological aspect of the anime was surprising to say the least. The connections were very legitimate and I was able to share feeling with many of the characters. This was maybe because I found myself in simillar states to some of those in high school and possibly bears some resemblance to some others I know (not the phenomenon). The fact that this had to end was harsh to say the least as it still had a lot of potential. But if you want something deep but not to take up too much time of yours this is a superb choice.

If you liked this try: Mirai Nikki

(Do bear in mind my opinion may differ from yours and this is merely my second review but if you have any constructive critisim or feedback to offer, I'd appreciate it :D) 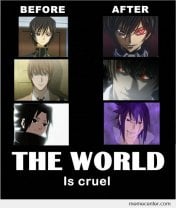 So I'm just gonna get out this out of the way if you hate un-finished storys you will hate this anime.

this anime is near perfect an amazing story consisting of randomn phenomenons occuring to a group of five, Taichi,Inaba,Iori,Yui,Aoki these charcters combined are amazing and have some serious devlopment and romantic situations and this is pleasing after bonding with them for many episodes and the insights to their past are either gutwrenchingly horrible or tear worthy happy.

The animation and art are near flawless with some minor issues (like Iori's beauty spot diaspearing for a second) and the sound is so fitting you feel like your there.

This anime is worth watching and the dubs are ok I suppose but back onto what I was saying about it un-finished.

The Company who provided the voice actors Silverline (I hope I got that right) decided to play a silly prank on a man for a small voice acting role in KC and after once they said it was a hoax they gave him a small job to compensate for it but that didn't stop the media outrage sadly and it is unlikley for s2 to be realeased.

Despite what animeplanet says there are 17 episodes but the last four feel rushed and not to par with the others but still the endings sweet.

An interesting premise that could have been done better

Crunchyroll is missing the last four episodes of this series and I cannot be bothered to look them up elsewhere. Subsequently this should be regarded as an incomplete review.

Kokoro Connect is yet another story about strange things happening to a group of high school kids. This one has chosen to aim for more realism in its characters world while continuing with a paranormal theme. The protagonists' secrets and vulnerabilities are exposed by a phenomenon that causes them to switch bodies and they all have to learn to deal with it.

It mostly stands up but does fall a bit short in the later episodes where the story drags. Towards the end the antagonist' heartseed's nature and reasoning remains unanswered. This felt unresolved and disappointing. Even though this is a character driven series, an important lot device such as Heartseed should not be left hanging. The characters relationships are also left unresolved.

The five teenagers are above average by most anime series standards, but that is hardly saying much. Only Inaba really stands out as a believably deep character. The voice acting for her was exceptional. The males were the usual drab bunch.

Artwork and music are of a reasonably standard.