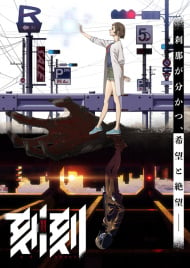 No, it's not paused. The show just does that sometimes. Kokkoku is a failed concept. That's the gist of this review. You know all those old sonic games that they rushed to get out and piled on some gimmicky concept to get it done in time for the new hardware to come out as a launch title, and then released something ignored by quality control and what looked like something still in the beta stage? Turn that into an anime, replace sonic characters with dull nobodies, make that gimmick stasis, and you have kokkoku. Geno studio is a new group that was formed by old Manglobe members, so I had high hopes for it, but its first release was not impressive, unfortunately. Kokkoku is a concept that isn't refined at all. We've seen the idea of stopping time show up in many anime, movies, video games, ect. So all they had to do was fully explore its capabilities in that concept in an entertainingly animated way, bringing new ideas to the table and making the concept of stasis a fitting one, maybe make it dark with some matching mood and music, make it kinda steins;gate-y. They didn't. Instead, it's more like "Time stopping for dummies" with the most boring writing possible. Instead of treating stasis like a cool sci-fi concept that can be dealt with in any number of ways and opens up possibilities for any number of events to take place in a single second, they treat it like a college lecture on fucking physics, and the most boring people ever are your teachers. All the things you want to know about the show are on the backseat for all the stuff you don't care about. We spend line after line of boring dialogue trying to figure out exactly where these guardian things are coming from, what they are, how to avoid them, why we can stop time, why we can stop time, who we have to go save, why we have to save them, what's the villain doing now, what's this shiny rock that can stop time, what's my ancestry that led me to posess this goddamn rock. We don't learn: The extent of this time stopping, how much of the world is affected, how can it affect your mind, what are the jellyfish things, why time stopping exists in the first place, or how it can be used to create interesting situations. There's villains and heroes. The villains have vague missions and turn out more anticlimactic than an abandoned mento coke bottle. Really there's only one, but i say villains counting the good-for-nothing characters that go absolutely nowhere that sorta kinda almost allign themselves with the big bad until they die at his hand. He's kind of a douche. We only learn why through a bit of out of place backsplaining so the only thing you need to know about him is he wants time all to himself and is willing to kill as many of MC in particular's closest relatives to get it. MC is a boring girl with not a whole lot of personality, defining features, or realistic attributes, which is disappointing considering she's tied for most likable along with her grandpa. Enough about the characters (said the writers of kokkoku, rubber mallet in one hand script in the other), let's focus now on the animation. If K-Project was soapy, shiny dishwater, this was dirty, unrefined dishwater in the animation, presentation, and atmosphere department. The "action" that's almost nonexistant takes a lot out of it, everything moving so janky like going off-model would be the end of the fucking world and using as little frames as budget will allow to get there. They also put a bad blur on certain things, and the guardians are all CGI. This anime just looks trite. The only thing that looks cool is the way things are frozen in midair most of the time. BUT IT SOUNDS AWESOME. The Opening is one of my favorite openings of all time. In fact if creators just looked at the opening and listened to the soundtrack and tried to make an anime just based off that, I don't doubt it would have come out pretty decently. The soundtrack is like it came out of a much better anime. The ending gets this anime just slightly above a score of bad. It explores a much-needed theme in a decent way but it ends up with a pretty anticlimactic payoff and the resolution of the story-wide problem is lame. It just isn't worth it. Geno studio, let's hope you get it right next time.

Huh? If you don't like drama or sci fi stay away. If dialog isn't your thing go watch dragon ball z. There is nothing wrong with this show. The characters may be somewhat simple but they follow through, it all makes sense and their actions have impact. The story has a concise and satisfying end and the mystery... Man it starts out inexplicable but the progression is top notch. You understand every concept eventually.  That's superb story telling. I don't know why this isn't rated higher. It's a short but enjoyable ride through a single millisecond of time.

This is by far one of the most underrated and underappreciated animes of the last few years. Most complaints are from people who didn't understood the plot, but if you are paying attention to the story then you'll be able to figure out everything important. Innovation, when it's too out of the box, often pays the price of being quickly discarded for not conforming to the norm, perhaps because there is nothing to compare to. It happened to Van Gogh, Monet, Edgar Allan Poe & even Bach. This is the case of Geno Studio, formerly Manglobe, who always aims to create something new, something unique that has never been done before. I have a lot of respect for these artists as they hold in their repertoire some of my favorite animes of all time. But in the end, anime, like any other art form is very subjective, and two people watching the same show do not watch the same thing, as they each focus on different things while bringing their own interests, experiences & emotions.  This is an excellent plot that plays around with the infinite amount of time between seconds! This was an excellent idea and while it has been explored before, it hasn't been done this well. I myself have never seen anything like it, and I have seen plenty of anime and Hollywood movies with similar plots and settings, but really nothing like this. It had me at the edge of my seat for the whole season and I had to binge-watch-it in full. It is really a good watch for anyone that loves sci-fi & supernatural mind-blowing settings, although the story it's mostly a thriller that keeps you wondering how they are going to solve the situation they are in. There is a lot of improvisation as things keep constantly changing for the protagonists. It will be a masterpiece if it not were for the ending, for which they choose to use a lame Deus Ex Machina plot device to resolve the situation with a happy ending. I'm not sure if the editor/publisher forced the author to give a happy ending or it's just filler material from the anime team, or the author just gave up to writer's block? If someone has read the manga please let me know if the ending it's the same as in the anime. Anyway, the end is less than satisfactory, but I value creativity & innovation above anything else and this was one amazing ride like no other, that deserves praise for 90% of the show. The ending is really the major flaw that brings this story down, and that is a problem of many animes that have an awesome ride just to crash down at the end. I also think that the power and setting were underutilized, not within this story, but it could have been explored more in subsequent seasons, but the way they ended this story does not leave it open to future seasons so easily, who knows? Anyway, a lot of ideas come to mind once you get the hang of how this power works and I would have loved to see them explored. If you want a better ending just stop watching Episode 12 at 16:25 minutes. On another hand, the way things are explained is through observation & experimentation. If you are the kind of person that loves to solve mysteries and make your own theories about what's happening, then this is a show for you. But that is not necessary for the enjoyment of the anime, because as long as you pay attention everything will be explained in the end, but you'll definitely like it more if you try to figure out things for yourself. The animation is good for its time. This type of setting is one that anime does really well, they couldn't have possibly made this story in real-life under a similar budget. They really take advantage of the anime medium to explore this world, including the character designs for the monsters which are mysterious with an eerie feeling. The use of gravity through the show also helps bring this world to life. The fighting scenes are intense and well animated for movement, also horrifyingly realistic at times. The music is excellent, especially the intro. Sound Effects are also good, on par with the graphics. The voice actors did excellent work on both Sub & Dub. The Dub is very good, but I notice that some dialog has been changed from the sub (yes, I already watch this anime twice! probably more by the time you read this review, lol), probably for lip-syncing reasons, but I prefer how some phrases are stated in the Sub. Regarding the characters, some of the reviews say that they are too generic, but that is not the case for all of them. Several characters suffer significant character development. The antagonists have compelling stories that clearly explain their motivations and you are bound to identify with some of them. Some are victims of circumstances and makes you wonder if you could act that way given such circumstances. It's especially interesting to see how committed they are to act for their goals, even when they have decided to commit crimes. Moral dilemmas are constantly explored throughout the story. There is a lot of emphasis on the fact that you cannot hesitate when you are in a life or death situation. Overall, this anime is not for everyone as it has lots of violence and barely any comedy. If you like mysteries, sci-fi, supernatural stories, and thrillers then you should give it a try with an open mind. It is one of the most innovative settings in recent years and at the very least it will leave your imagination wandering about the possibilities of everything you'll see in this story. 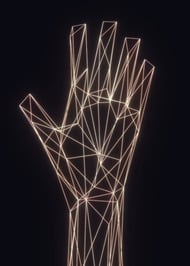 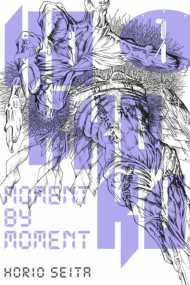