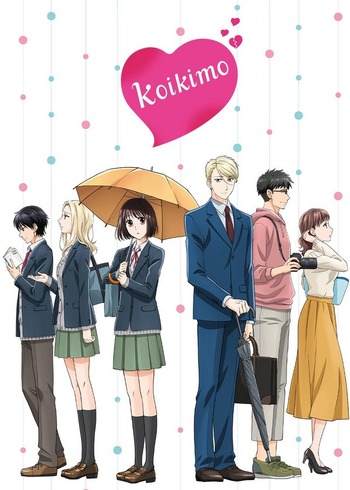 Koikimo’s the kind of show that knows exactly what it is and doesn’t try to pretend to be anything else. It’s a straight-up rom com series with an age gap, only this time it’s the adult salaryman who’s doing the pursuing instead of the high school girl. It’s cringe, sure, but right off the bat, you already know what you’re getting into. So if this is the kind of thing that turns you off, then you’re totally free to drop it. Which I would have done if I didn’t get this as a Lottery pick, but alas.

To its credit however, the show does take the romance seriously and none of it is trashy or turned into a joke. It even does address the age gap issue later on, but at that point it’s mostly just for show because by then, you already know it already meant to pair the main couple up anyway.

Which, I know you’re saying, is the whole entire point of the series. But more than good characters – which this show doesn’t really have – a rom com is dependent on that “will they or won’t they” tension and whether or not you’ll give a shit about a couple ending up together. In Koikimo, there’s some effort to do that, but because you already know how it’s going to end and because the show already knows how it wants to end, a lot of the tension is lost early on.

You can’t get invested in it, in other words. Even before you settle in or get used to the main characters, you’re already being led to think about them as a couple. Their dynamics, clearly defined early on, start to lose their edge when they start catching feelings for each other and it’s at this point the show becomes well… boring.

In Koikimo, majority of the tension was supposed to come from the age gap because that was what the show was riding on in the first place. But because the issue only really becomes an Issue towards the end, the show fails to really challenge the age gap and instead treats it as some roadbump before having the main characters end up together. It knew it had to address that at some point so it did – only, it looked like it was just going through the motions and hurrying through the thing so it could get to the endgame.

Cringe factor aside, Koikimo is just not very good. The age gap, initially the whole reason for this plot coming to life in the first place, is cast aside and dismissed as “some rando’s standards” in favor of what everyone else here thinks is true love. Between a working man in his late 20’s and a 17-year-old high school girl. And yeah, okay, love is subjective and age is nothing when you’re an adult and all that hooey, but who really knew themselves at 17? What part of an adult wooing a minor still in school doesn’t look alarmingly like grooming to you? Even if you could argue the girl was treated as an adult here – why? Why put the burden of deciding on the relationship on the one who doesn’t know any better and not on the adult who should?

Koikimo tries, it really does, but in the end, it doesn’t really do anything genre-shifting with the material. It meant to show you a romance was possible in spite of the age, but I didn't feel it really put in the effort to convince you. Almost as if it was operating on some pre-conceived notion and that all you had to do was to follow it along.

I guess the most objective way you can look at it is: can it stand on its own, even without the age gap? The answer, unfortunately, is no.

[This review was made for the Anime Lottery Game: Spring 2021 event. No, because stop – really stop for a minute here – and think about what it looks like for a working man to be so whipped for someone who hasn’t even graduated high school yet.]

So, long story short, I am retarded, I had too much time on my hands this season and decided to watch some shows that belong in genres I don’t particularly like, you know trying to be open minded, expanding my horizons and shit, you know what? I absolutely regret it.

This show is about a guy that falls in love (?????) with a school girl, because that school girl gave him his launch and refused to sleep with him as a reward. That’s about it. Then the guy turns around 180 degrees and goes from being a womanizer to the most pushy lovely cuddly wanna be the perfect boyfriend that will make your eyes puke. Ofc there is someone else who likes the student and ofc there is someone else who likes the adult to make the story more… complicated I guess? I don’t know, anyway the thing about the story is that it is uninteresting, it is repetitive, it is slow-paced and plays out exactly the way you think it will. I can’t think of anything good to say about it, I guess that bit about that adult woman that likes the MC being an “undercover” otaku is kind funny… maybe… At least the pace is consistent, it is slow, but none the less it’s consistently slow.

I won’t really stand on the topic of age difference since I don’t care that much. I’ve said it before, but I don’t care if a love story is between a young and an old person, between same gender, between animals, between a couch and his pillow, between a tissue and a nose or between a grain of salt and rusty screwdriver, as long as it is a love story well told. This is not the case here unfortunately, this story is not well told, it is barely a story for that matter. It’s been told before countless times, it’s boring and predictable, as i said, i really can’t think of anything good to say about it.

So, characters, I mean that’s what romances are all about right? Well, here’s the thing about romances, in order for them to work, you have to empathize with the characters or sympathize them. One of the two. I just can’t see how that’s the case here, they are not plausible, they are not likeable, you can barely call them characters. That’s the main problem with romance shows, they don’t act like characters, they are puppets dancing on strings, a prime example of this is how everyone keeps running on each other, every other episode or so. The characters will bump into each other by pure coincidence, they don’t do stuff cause they want to, cause they have to, cause their character would do something, they don’t really a have personality so they just do as the plot says, they never feel like real characters at any point in the show. I mean you can say that it’s all about fate when it comes to meet the one you fall in love, but at least my tolerance to fate stopped at when the young girl that gave him his launch turned out to be his little sister’s friend. Everything else besides that is just awful writing and cheap plot mechanisms because the characters can’t drive the story forward. For what it’s worth the woman that likes the MC does try to act like a character, she is not great or anything but she does stand out form the rest, as well as the MC’s childhood friend, he is probably the best character in the show and the only likeable one, unfortunately his role is not that big, unlike the MC’s manipulative bitch sister.

Animation is very basic. Character design and aesthetics are boring, lazy and uninteresting like the rest of the show. The opening is decent I guess…

Sound is on the same boat, nothing stands out, everything is pretty much boring and uninteresting, tracks and voice acting as well, nothing escapes mediocrity.

So is it worth a watch? Nope, most definitely not, unless this is your favorite genre and you gulp right down every easily digestible and as easily forgettable romance that comes your way then ofc you will digest this one as well. But for someone like me who is not a fan of this genre, even though I came into this show with no prejudgments, I found nothing that can change my opinion about the genre.

*on another topping, for like a month now, over here at my country, there has been an incident that’s all over the news. A 20 year old woman, mother of an 11 months baby was murdered in what appeared to be a break in incident. A couple of days ago it was determined that her 33 year old husband killed her and plotted the whole thing to cover it up. Where am I going with this? This 33 year old guy, was running behind the girl since she was 14 (!!!!!) (he is a pilot, and he was flying in circles with a helicopter above her school to impress her, or so they say at least). So, even though love is blind as they say, this blindness is more often than not caused by deep psychological or psychiatric issues that people should address one way or another before the shit hit the fan.

I can't say how much I love this anime. It was just so cute, funny and romantic and I just had to smile all the time (and that's not something what I often do). There was so many things what I wanted to write here, but the only thing what I can remember now, is how awesome it was, so yeah...If you are looking for some innocent romance, Koikimo is definitely something for you.

(Btw the reason why I didn't give to Koikimo full points is because it can be little more original and I like when there is in anime more then one couple, but that's not that important.)

This is fun to watch, IT IS TOO CUTE, always give me a smile on every episode.

I would say a romance series with a bit of comedy. Salaryman Ryo falls in love with his younger sister schoolmate and friend Ichika. Ichika has zero experience in matters of relationships between man and woman. Ryo is more experienced, but he didn’t have a proper relationship. He just slept with women as it seems to me. He has still bit childish side to him, but he is motivations are pure towards Ichika. She is very embarrassed and resists his pursuit, but she is slowly starting to build relationship with Ryo. The beginning is more light-hearted more comical, but towards the end it gets more serious as the series tries to address some of the personal issues and general theme of age gap between Ryo and Ichika. Personally, I did enjoy the beginning more and I did enjoy some side characters more. For example, Rio (Ryo’s sister and Ichika’s friend), Aria (Ryo’s female co-worker) and Kai (Ichika’s classmate). Ryo is bit too perfect for me. He is cool, smart, desired, has no stress from work, etc. I would prefer less picture-perfect male lead. It would make his struggle more real. The series did show some issues one could expect in their respective age categories, but too little and too late imho. Overall, it’s an ok series. There isn’t much to say about it. It’s pretty straightforward and there aren’t that many twists or conflicts and even those are predictable. In context of the season there are better series in the season.

Animation and visuals are ok. Sound is ok. OP and ED already forgot that.