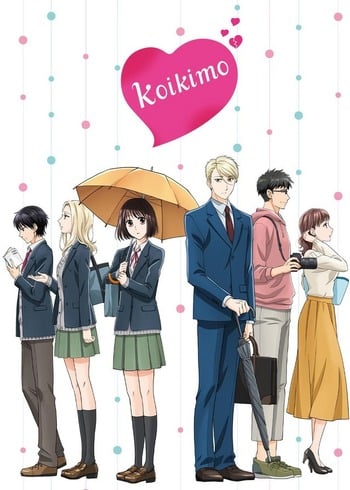 On his way home from drinking his sorrows away after being rejected by his crush, the 26 year old salaryman, Yoshida, finds a high school girl named Sayu sitting on the side of the road. Yoshida is completely drunk out of his mind and ends up letting Sayu stay at his place overnight. Not having the heart to put Sayu out on the streets since she ran away from home, Yoshida allows her to stay at his place... And so began the awkward, irritable, and slightly heartwarming relationship between a runaway high school girl and a salaryman living together.

Reasons you might like Higehiro: After Being Rejected, I Shaved and Took in a High School Runaway...

Theyre both age gap rom coms focused on a high school girl and a office working older male. Higehiro is the man falling in love with the girl (or maybe both of them falling for eachother?) while Koikimo is about the girl falling for the guy (after the guy already likes her)

Similar age gap stories, even though Higehiro is more on the sexual side. The stories begin in a similar way too - the other person helping the other one. In Higehiro the man helps the girl and lets her live with him after she ran away from home. In Koikimo the girl helps the man by giving him her lunch when he hadn't been feeling well.

Both are very similar in ways, Such as the age gap between the ML and the FL, They also both have a somewhat similar story line.and the graphics styles are nice in my opinion. I really enjoy them both

from the frist episode i can compair with id say these both hold simular vibes of romance, cute, funny and romance ;3

Both animes are comedic age cap stories where a high school girl falls in love with an older guy. The main difference between these animes is that in After the rain the man doesn't push himself on to the girl.

The dynamic between the two leads from each is similar- both involve a romance between a narcissistic male and a very down to earth girl. Of the two series, Koikimo seems to be the more grown up, realistic alternative.

these two defenetly have simular comedy to eatchother ;3

The male leads kind of resemble each other since they both act somewhat masochistic. They both confessed love for the female leads in the first episode, too. The settings are kind of different, but they are both sweet, enjoyable shows!

Both anime have a female that is a tsundere character with a sweet but misunderstood male lead. Taiga is more aggressive though.

Following an argument over pouring soy sauce on her dinner, Nodame decides to get her revenge on Chiaki and arranges a date with Lucas. Sadly, her attempt to make him jealous doesn’t work out quite as she planned, as while eating lunch with Lucas, Nodame discovers that the charismatic composer has a date of his own! Racing back to prevent any damage from being done to their relationship, Nodame is relieved to see a familiar face clinging onto Chiaki’s arm, but what will happen when the pair's "dates" come face to face?