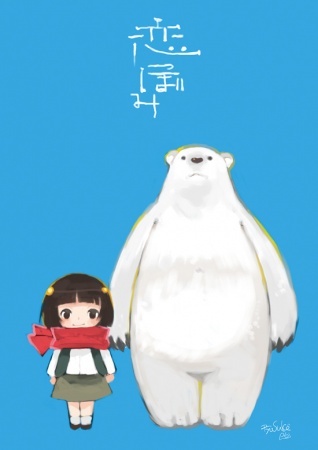 Story: Friends who want to be together

Both of these are about two characters who love one another.

Koi Tsubomi features a girl and Polar Bear, and a girl and rabbit are the focus in DECO*27: Ai.

After walking her grandmother to the train station, young Mimiko is left home alone. However when she returns home, a giant panda cub is resting on the porch. Mimiko befriends the panda and later the panda's father, and they begin to live together as an adopted family. However living indoors isn't easy for giant pandas, and to make matters worse, several townspeople want to "save" Mimiko from her adopted panda family!

Both feature a young girl and a bear.

Both are family friendly.

Both have sadness that is present but is not the focus of the anime.

The overall message is that the girl and the bear (or bears in Panda! Go Panda! 's case) should be together.

If you watched Panda! Go Panda!  and are looking for something shorter or you watched Koi Tsubomi  and wanted something longer than look no further.

A young bear awakens to a new day. From trying to get a plant to grow with everything from milk to juice, to strumming a guitar and playing with a baseball, Kuma has plenty of fun within the walls of his room.

Kuma no Gakkou Movie 2: Patissier Jackie to Ohisama no Sweets

“Rain falls in the mountain, Dancing on the groundForming a small stream of water A mischievous bear runs by the stream. Silently he looks down at the water, And wonders if there is a fish…”

The official music video for Arigatou: Kokoro no Bara by Mike Maki that was featured on NHK's Minna no Uta program.