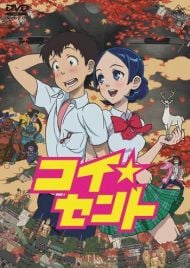 Story 5/10 Koi☆Sento is an offering markedly light on plot. It's a story about two young people who meet by extraordinary circumstance, fight through a spectacular adventure, and fall in love. If that sounds mildly refreshing, that's probably because it is; if it seems a bit on the shallow side, I'd agree with that as well. It's an airy, bite-sized romance that establishes a bold, intriguing setting and just teases us with glimpses of its inner workings. The interplay between the two leads is the focus here, and we're not provided with much insight into past, future, or motivations for any of the characters. Animation 8/10 The animation in Koi☆Sento is the product of an interesting but very strange design decision. Every character and object that we see onscreen is actually modelled in three dimensions. If you're not apprised of this in advance (as I was not) it can be somewhat confusing and even jarring, as characters move through space in a way that is difficult to expect. The result is, of course, breathtaking. The models are all beautiful and well-crafted; if corners were cut anywhere, I did not stand to notice. Onscreen action gains a sense of depth that I've never before seen elsewhere. In the end, only one thing suffers, but it's unfortunately an important one: the increased fluidity in the motion of characters did not take into account the way actual human beings move. For machines, robots, and monsters, everything works out fine; however, the humans we see on screen have such a connectedness in their motion that it makes them fall right into the uncanny valley. It's a difficult effect to describe, but I would have to say that it's as if the animators entirely forgot what 'bones' were and why we people have them. With such high production values across the board it's a shame that such a minor oversight affects the otherwise beautiful work as much as it does, but there's no denying that in what is effectively a romance title viewers have to be able to put themselves in the place of the characters; every time this effect comes into play, immersion is broken. Sound 8/10 The voicework is the standout in the sound category, with both leads and several secondary characters pulling excellent performances in all the (short) time we get to see them. The high production values once again show themselves through the sound effects, which are all good to great. Onscreen music is fair, but not exceptional; I very much enjoyed the ED, however. Characters 6/10 As I stated in the story section, the unfortunate fact is we're not given to learn anything meaningful about any of the people we meet in this visual journey. As a result we're forced to judge the characters solely on what they are, rather than who they are. Not even the leads are really characterized in any noticeable fashion. There's one amazing scene near the middle of the sequence wherein Toto, our female lead, interacts with the antagonist of the story, her handler, showing an ego and some backbone while 'Mama' hints at the reasons for her actions. For the rest, I can only really say that no-one really did anything to make me hate them outright. Overall: 6.5/10 This is definitely one of those titles I feel would benefit strongly from expansion into a longer production. What we have in Koi☆Sento is a short romp through an intriguing and visually stunning setting, with hints of a plot that is not understood by its inhabitants at large; we are introduced to a heroine of unusual provender whose story is undoubtedly going to be interesting at some point in the future; and we are served a helping of beautiful action and a taste of feel-good romance. The formula largely reminds me of Eureka Seven, though with no further media forthcoming there's nothing to really bear out this impression. And hey, it would give them a chance to fix whatever went wrong with the modelling.

Absolutely not. I got 8 minutes in before I had to stop this. Slapstick comedy was too much and the characters were caricatures of themselves; I couldn't even enjoy the story :(