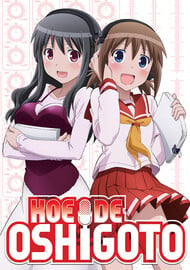 Foreword Ummm....Every anime has it's- I mean sometimes we all- *Sigh* You know I'm gong to start this review out with a bible verse: Jesus-30-456- "And the LORD said: Sometimes you just do shit bro." And with that let's get started on this review! The review has...Begun! Story  Did they send me Loli's? When I asked...for Moms! Ok no more Mulan, or we'd be here all night.  Alright! Story! For Koe De Oshigoto, which means "Working With Voice"    Plot follows Kanna Aoyagi, a freshman in highschool who gets a job as....An eroge voice actress. yes I know  For those of pure heart, an eroge is a porn visual novel. For those of western hearts, a visual novel is a video game with a lot of reading involving choices. We all know Japan has a lot of things to answer for like Godzilla, the reason pepsi flavored chips are a thing, and last but not least the whole children in the sex industry thing. It's just a little strange a 16 year old is doing the voices for characters doing the horizontal tango and chumming for rach dressing.  Some things you just have to take with stride, and this is one of those animes where someone asks you "why did you watch the anime?" and you respond like I-I can explain  Your mind is racing for the nicest way to say "I wanted to hear japanese actresses voice act diving for splooge without being judged for watching hentai" (not that that happens, but probably should've) In all honesty I saw this and I thought "Maybe it'll actually provide some insight on the behind the scenes of recording eroge." Not sure if any of this in the show is credible at all but it's enjoyable. There are only 2 episodes so I won't go into any "detail" as not to spoil anything. Just know un-experianced girl gets kinda roped in to do voice acting work for eroge and is pretty good at it.  Story: 6.0  Animation The animation was decent , it's what you'd expect from an anime made in 2010. This being an OVA series they where able to surprisingly get some pretty lewd scenes in there. I'm willing to bet OVA's can put pretty much whatever they want since this wasn't going to be brodcasted. This anime is the definition of borderline hentai, the verbal part alone could push it over the edge. The show will either look like this how it always starts  Or this both of which sum up the show pretty well    The animation wasn't bad so i'll give it a 6 Animation: 6.0 Sound I don't remember any music at all from this anime. The score is utterly forgettable. Everything was probably made on a computer using public domain sound bites.  The voice acting for Working With Voice was good. Decent I guess. given the nature of the lines in this anime I'm going to go ahead and give that to them. I guess it's nothing different from the thousands of hentai out there but it was good. I hope there never will be a dub cause everytime they dub hentai or something this lewd. It turns out to be so bad it's funny.  Sound:  6.0 Characters We have the main    Kanna Aoyagi  All that I have said about her so far pretty much sums up her character. Although she has a secret power that I have not talked about. That isn't even her final form.     Yayoi Aoyagi Who's name is too close to Yaoi. She is the older sister of Kanna and isn't what I would call a positive role model. Although I guess you could she she looks out for her #squad?   Funika Warasono Fumika is the senior character with the big tits. She's older and more experianced, and also a voice actress. That's pretty much it for her   And that's about it, there are some male characters but they don't really matter.All except  A truly beautiful speech. Brings a tear to my eye Shigeichi Sakanami  He definately brought the comedy to the table and besides the mains he's the only one that i really gave a shit about. Characters: 5.0 Overall All in all this anime is a vocal hentai. It definately has questionable scenes and it has it's share of comedy too. If you are into ecchi/borderline hentai shows then give it a watch it's only two episodes. Everyone else, go ahead and skip this one you won't be missing anything. Recomendation: Ecchi Fan? Watch It If not Skip it Rating: 5.5   Animes that get this rating aren’t really worth your time. They don’t bring much to the table and frankly should just be skipped. However some of these shows have certain elements that might be worth the watch. There is SOMETHING that can be taken from this although in the end it’s still probably not worth it  As always that's your boy wiru-san's take on it. Follow me on my Tumblr and check out my channel onYoutube. And Remember to stay the hell away from woodchippers.

Ok, before you you wander into this fucked up little creation known as Koe de Oshigoto! The Animation, know that this is essentially and by all means of what I've heard is hentai, actually depicting sexual intercourse and the like. Story: (3/10) This is essentially hentai with story smothered all over it. Not equally smothered either, more smothered like a mother to an unwanted baby or something along those lines. It's about some girl (didn't care to remember her name, seeing as it hardly matters) who, out of some distorted sense of duty, feels it necessary to assist her older sister in the voice acting for an eroge game. I really don't even think this was meant to "turn on" even the creepers who are into this kind of stuff, seeing as roughly 85% of the time it's just plain awkward. Not in the "you're too young to like it" sense of awkward, more the, "why the hell would she do that?! It'd be so much easier for her to just do it this way" sense of awkward. Also, apparently she's underaged, and super sensitive to pornographic images(I mean, who better than the pornophobic amateur to do voice acting for an eroge? :D). All in all, it succeeds in the sense that what it was trying to attain by groping around in the darkness is mediocrity. Animation: (8/10) Like the majority of 2010 anime, this is essentially the only decent thing about the show. I mean, why put vibrant colors and brilliant animation to a decent show, we'll just put it on this hell orgy of a sandwich known as Koe de Oshigoto! The Animation :D Sound: (6/10) I will admit, they did a damn good job voice acting the unnecessary and admittedly akward slurping and "pleasure" moans, although good singing in a shitty opera doesn't really matter in the end, eh? As for the OP and ED tracks, to be frank, I don't even remember whether or not this show had 'em. I hope that explains enough. Characters: (3/10) These characters both completely lack morals and basic logic. The lack of morals stems from her older sister, who has no qualms about using her underaged little sister to voice act in an eroge, and the lack of logic comes from the little sister, who still thinks she owes something to the hollow shell of a person that is (apparently) her sister. The support characters essentially stand back and critique the complete awkwardness that is this underaged girl's voice acting, which makes it (guess what? :D) even more awkward. The only thing that keeps me from giving this section a 0/10 is that the younger sister is reluctant and maintains some sense of logic(which ironically conflicts with my original statement), but nontheless, they still all piss me off. Overall: (3/10) Overall? This show shouldn't be watched by anyone unless you're the kind of sick bastard who enjoys watching a 16 year old girl awkwardly stumble through a forced eroge voice acting career. Hell, even to those guys, it's still a hesitant recommendation.

Koe de Oshigoto belongs to the crap I only watched because of forum events (in this case, the Daily Anime Marathon). This was an anime where I was really tempted to throw my laptop out of the window so I wouldn't have to watch it anymore. Allow me to explain what I mean: The story revolves around Kanna, a high-school girl who has just become 16. Her older sister asks her to become a voice actor in an eroge (a porn game). Kanna refuses because it's too embarassing and because minors shouldn't do that kind of thing, but she gets guilt tripped into doing it anyway. I already felt like stopping there, because making your little sister doing that kind of job is something for pure trash to do and because Kanna's reaction annoyed me here. "I don't want to do it, but my sister cares about me so I'll do it anyway"? NO, screw that, big sister should just get real voice actors. Anyway, Kanna now has to be a voice actor in an eroge, and she has 1 week to train how to do it. Without any experience as a VA nor when it comes to sexual stuff (she's never even held a boy's hand), so she just has to wing it after playing one eroge herself. This is all completely believable and totally possible of course, as long as she uses "concentration and imagination". Hem...  Also very convenient for her career as a VA is the fact that she can have an orgasm just by imagination, which makes her orgasm in front of other people while acting. The first episode ends with her finishing her first eroge. In the second it becomes even clearer how stupid all those people are, because her name is in the credits even though she wants to keep her job a secret. The plot of the first episode is more or less repeated in the second, but now she orgasms in front of a lot more people, one of which is a classmate. And then they call it sexual harassment when one of the guys says her voice acting gave him a hard-on... There are some attempts to make this OVA funny at times, but those failed miserably. Awkwardness does not equate with humour. Instead, it made watching this trainwreck all the more annoying. The characters are all completely uninteresting and stupid. They all lack basic morals (don't let little girls do porn stuff), and don't realize that they shouldn't tell people who know her personally about her job. The fact that you shouldn't let your younger sister have an orgasm in public also isn't something the older sister is interested in. The animation was good, without much else to say about it. The soap-bubble censorship was hilarious (although that was about the only entertaining thing) The sound? Well, it's an anime about voice acting, so having good voice acting should be a given. And yes, in this case it's on point. The music on the other hand... not so much. I liked the OP, but the ED was bad and in the episode there isn't much background music. Overall: you really should look for a different anime, regardless of whether you're looking for a good story or good fapmaterial. This one is a huge waste of time, and often extremely annoying. 1.8/10, it's not even a good titty show. 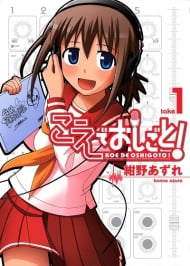