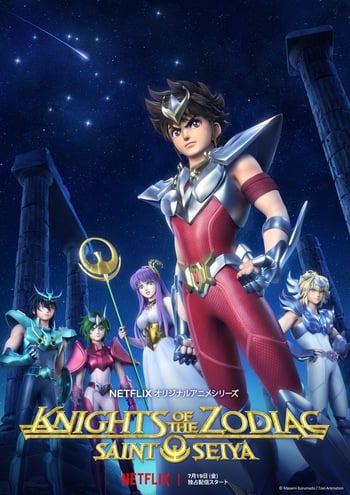 If you're looking for anime similar to Knights of the Zodiac: Saint Seiya, you might like these titles.

Eris, the Goddess of discord, has returned in the form of a golden apple and has kidnapped Athena. She is draining the life force out of the Goddess Athena in the hopes of fully resurrecting herself. On their way to rescue Athena, Seiya and his fellow Saints encounter the powerful protectors of Eris, the Ghost Saints! Will Seiya and the others be able to vanquish these foes and save Athena?

Hyoga, the Cygnus Saint, travels to Asgard after having heard rumors of a conspiracy that has been transpiring there. Athena and the Bronze Saints are unable to contact Hyoga, and thus set forth to travel to Asgard and meet with the High Priest of Odin, Dolbar; for he may know the whereabouts of Hyoga. However, the gang will soon discover that what awaits them in the land of the Scandinavian Gods is much more than they bargained for!

Resting peacefully in her garden, Athena is visited by her brother Abel, who calls himself "The Son of the Most Powerful God". His purpose is to take Athena to a new and perfect world, fitting for the Gods, where they can reign together in peace after Earth has been destroyed. He has with him a group of exceptionally powerful warriors: his own Saints and the fallen Gold Saints, and has no intention of letting Athena go. Will Seiya and his friends be able to save Athena and thus the Earth itself?

Lucifer has returned to Earth, and together with his fallen angels, he plans to take over the Holy Sanctuary of the Gods. He calls upon Poseidon, Abel and Eris to help him conquer the Earth, but what he desires above all else is to see Athena crawl before him, surrendering her domain to him. Will the Bronze Saints be able to protect Athena once more and return this fallen God back to the fires of Hell?

In the hopes of destroying Hades once and for all, Athena has sacrificed herself so that she may be brought to the Underworld to face him in person; but her protectors will not give up on her so easily. Carrying the Holy Armor of Athena, the only tool that will lead them to victory, Seiya and the others join forces with the remaining Gold Saints and traverse the Underworld in the search of Athena. They will have to face many of Hades’ Spectres, including the three Judges of the Underworld, in order to achieve their goal.

A few days after the battle against Hades, Athena is visited by her sister Artemis, who has come to her with tragic news: the Bronze Saints are to be punished by the Gods for having dared to confront them, Athena is to be relieved of her status as Guardian of Earth, and she is to be replaced by Artemis and her Saints. After having regained his consciousness, Seiya finds himself in a new Sanctuary under the leadership of Artemis – and he’s not the only one fighting against this divine injustice. Shiryu, Hyoga, Shun and Ikki have made up their minds to fight the Saints of Artemis and restore Athena to the throne.

The time has come for Hades and his 108 Spectres to awaken. For after 243 years, he is on a mission to start a Holy War and take Athena’s head, using fallen Gold Saints to do his bidding. It’s up to Seiya and the others to keep Athena safe, but the remaining Gold Saints at the Holy Sanctuary are less than excited about their interference. Can Seiya and the Bronze Saints save the day once more?

In the wake of a space-wide civil war instigated by Saga–the Gemini Gold Saint–a new team of Saints comes together with the goal of protecting their goddess Athena. This first all-woman team of armored warriors, powered by the Zodiac, will use their cunning, strength, and compassion to defend their worlds and oppose their very destinies.