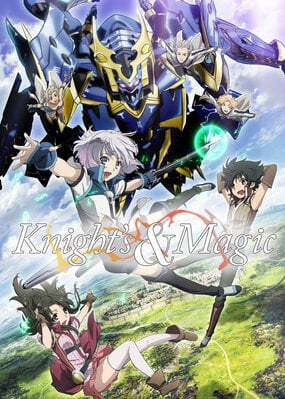 So, we start with an otaku protagonist who is completely detached from humanity. He is a genius programmer with an infatuation for plastic toys. He loves them so much, to the point the only thing he says when he dies is how he won’t be able to play with more toys, instead of how devastated his family is going to be by his death. You are instantly made to know he places machines over people. He is then reincarnated into a magical world with no explanation, where, conveniently, the plamo he loved in our world are huge mecha in this one. With some convoluted logic, because he loved playing with them makes him able to know how they work better than anyone else, while still being a kid. That also somehow makes him able to build, pilot, and upgrade them faster than anyone else. And then he goes to have a fun adventure as he fools around with them, while the natives of that world are dying by the millions during wars and monster invasions. Yeah, it’s completely messed up. As you will probably notice right away, the only reason there is reincarnation in the show, is just so they can excuse in the pilot episode why the protagonist is an overpowered psychotic kid. It plays no part in later episodes and he doesn’t address it anymore. So basically, they slapped the isekai premise because “hey, it’s in-fashion so let’s use it.” It’s obviously there to pander the ever growing number of otakus who wish they could escape reality by getting transported in a game-like world, where they are awesome and everybody loves them. And this is what you have to understand from the get-go with this show. It’s not about mecha or action or suspense, as it is empowerment fantasy for those who have a fetish for plastic robot toys, as well as androgynous boys. Because that is what the protagonist is; an idealized trap, loved by both genders for how awesome he is. If for some reason you can’t handle the non-stop over-praising of his skills, this is not a show for you. As you can probably guess by now, there are no memorable characters besides the trap MC. Whether it’s love interests, military officers, mindless CGI monsters, or enemy soldiers, all others are there for validating how awesome he is all the time for living in the fantasy of his dreamy hobby. And the MC has no complexity or depth; he is just a picture perfect self-insert power house, having fun while piloting robots, making robots, laughing while fighting monsters with robots, or getting angry when monsters destroy robots (and not the people they kill). He is instantly a better pilot than anyone else, he has girls loving him for looking like a girl, he is laughing at moments when others are screaming in fear, and acts like a complete madman. It’s disgustingly self-indulgent. I could spend a few paragraphs on stuff like the setting or the visuals, but they don’t matter in the least. As long as you are fine with this sickening premise, you won’t give a damn about anything else. Aside from that detail, it’s a complete throwaway show, with nothing special or worthwhile to look back once you somehow manage to finish it.

This is my first anime review so you might want to expect some cringe :/Only 6 episodes of the anime has come up as of the time that I wrote this review.The only things you need to know is that Knight's and Magic is a light novel adaptation, is usually a upbeat anime so don't expect a lot of tension or grittiness. And if your looking for an anime that has has weight and a heavy plot than you MIGHT want to skip it.As for light novel adaptations they will most likely not have a lot of the extra information that is in the light novels because there is just too much extra padding and information that is added in light novels that would almost certainly be too much for a 12 or even 24 season run! Story: 7/10As I said before, this is a light novel adaptation and so yes a lot of stuff has been left out and multiple time skips may happen in episodes but while some might say that the story is rushed I don't think it's a very big problem!Whenever a time skip happens the narrator will fill in the blanks even if it's very vague. This also happens when the story speeds up as the episodes are very fast paced so some stuff will be left out. The time skips usually just skip a couple days and you may or may not notice that in the light novel they don't have a time skip there but personally because they condense and speed up the plot you get a lot more enjoyment and "hype" because a lot more things will happen in one episode even if they will skim past an entire story arc that was in the light novel.Even though the story is fast paced in certain episodes it will never feel too fast because there will be episodes that are more slow to provide a nice balance. For example if one episode is fast paced the next one will be slow.As for the plot itself it's almost simple enough that you could guess what would happen next but there are curve balls and twists most of the time so that doesn't happen. Overall the fast paced plot that's combined with an interesting setting like this always leads to a lot of fantastic scenes.Animation/Art: 8/10I didn't expect that much in the art department but man is the animation amazing! Before I say anything else you should know that the mechas are cgi and while that might of set you the designs are very good and everything blends well together! I could see that a lot of care has been put into the animation because everything is colorful and nothing ever feels out of place.The bright colorful animation does a wonderful job for a upbeat anime like this especially with the action scenes.Sound: 7/10The sound isn't neither good or bad but there's a wide variety of music so that every scene feels just right. The op is a very upbeat and catchy song that fits well with the anime.Characters: 6/10The characters are all unique with there own quirks but nothing goes up and beyond in terms of the characters and you might even be able to know what the characters will do next but nothing about the characters are boring or bland.Enjoyment: 9/10While his may not be everyones cup of tea I really love how much of a stress reliever this show is even with a fairly complicated premise.Over all I would recommend everyone to watch this even if you don't think you would like this because you'll probably regret not watching it!

More heavily indulgent isekai, but in this case it seems like the author is indulging in love for mecha that fight monsters rather than exclusively focusing on the self-insert main character. It's worth watching so far just to see what robots this kid is going to make, but it's honestly pretty horrible (for the usual reasons) otherwise.