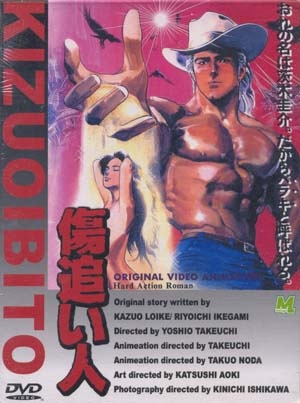 If you thought that the same people who made Wicked City made this then you're wrong but I can't blame you for thinking it. It has pretty much the same problems as Wicked City; constant mindless violence and constant sex derail the plot. The journalist gets raped in the hopes that this would scare her away (awfully minor thing to rape someone over) and you would expect that this would ruin her life and lead her to stay inside and cry all day but no, she tags along with the rapist in his adventures. I'm dead serious. This is the worst handling of a sensitive, depressing and widespread subject that I have ever seen in an anime. Even worse than in Wicked City. In Wicked City the victim was somehow OK after being raped for hours but she didn't team up with her rapists. In short this is the worst OAV I've ever seen and one of the absolute worst anime of any kind that I have ever seen.

What if trash Japanese pulp fiction and C/B tier movies were mixed together and add some highly effective steroids to this mixture. You get Kizuoibito! Known in English as Wounded Man, this 5 episode anime will surely make you regret the time you took to watch it. Unless you watched it deliberately for the purpose of watching bad anime, like the members of Damn! That Anime is Bad (DTAB), a group of Weebs on the official Anime Planet discord server, did. DTAB is an event where the participants watch a very terrible anime once a week every on a Sunday afternoon/night. Know more about it here!

With the blatantly obvious trap/recruitment/cult invitation out of the way, here's what little I can talk about this show. Surely from the content tags and the first sentence of this review, you will have no hard time realising this is very bad.

The story revolves around a former Japanese rugby/football player who went missing and is now digging gold in the Amazon jungles or thereabouts. A Japanese newsreporter visits this gold mine and our MC rapes her as a warning to not trespass again. (Yeah, you read that right). This woman then falls in love with her rapist and they have lots of consensual sex this time. Something happens in the mean time and the hero and the girl get tangled up with a mafia gang that specialises in making porn videos. The hero refuses to have sex with his GF on camera and would rather see her tortured than make a sex tape (the same guy who had no problem raping her mind you!). While this lovely couple is tied up, the girl manages to break loose, only to jump in front of the hero at the right moment to shield him from a bullet and die.

That's episode 1. And that's also episode to with a different heroine and the same hero. And the same happens in episode 3 and 4 (almost). Meanwhile the bigger plot is going somewhere but trust me, the sex, the bad animation and the mindless violence are enough to throw you off and forget about the plot altogether. Episodes 4 and 5 have the least rape and sex and these two episodes have the majority of the storytelling that's understandable. But even then, it's beyond help. One this is clear though. The wounded in wounded man refers to this poor rapist hero having to watch every rape victim of his die to protect him. That's his "pain" to bear.

The action scenes make zero sense, even surpassing the usual brokenness of "anime logic". At times it feels like the video is running at 5 frames per second and at times, only still occupy the screen. I broke out ugly-laughing during supposedly serious moment because of how bad the animation was.

So, is this anime so bad that it's actually fun? I think so. But that might not be the case for many people. Rape, nudity, sex, physical torture and explicit violence all in one show are definitely not a lot of people's cup of tea.

For the sake of the good memories of watching it with friends, this show gets a 2 out of 10 from me.

Well... this I'm not really sure what to say about this 5 episode OVA called Kizuoibito (Wounded Man). Pretty much its Kazuo Koike worst anime adaption. Its not as interesting or visually appealing as Crying Freeman, nor is it as gut wrenchingly hilarious (if you have a weird sense of humor like me) as Madbull 34. Well I guess a part of that has to do with the fact that its his earliest OVA dating back to 1985.

Sound- Some nice synth and rock beats throughout, but fairly unmemorable as were the voices.

Characters- All the female characters seem to want Kieske's junk without explanation and the amount of girls he goes through in the course of OVA episodes is equal to the number of episodes so that should tell you something. The "villains" are boring and the main char himself is rather titular and only seems to care about two things. Beating people up and having sex.

Overall- If you want a better story, characters and animation Crying Freeman is a much better watch. If you just want to have a laugh at crazy situations and characters who seem to spout nothing but profanity go watch Madbull 34. This OVA is not worth your time.