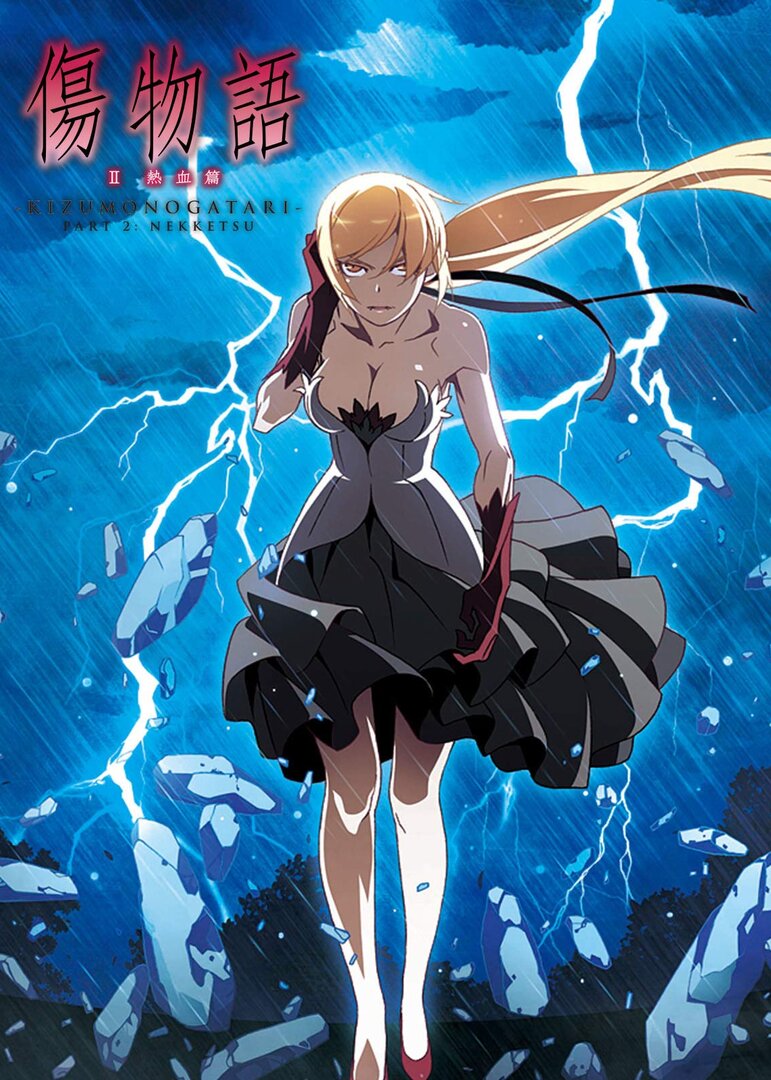 Short version:
If you watched Kizu part 1 and skipped it because of it's slower pace and less comedic tone, I'll tell you up front this movie improved on both. If you skipped this movie because of its very limited theater run and how bloody long it took for the DVD to come out, you're in luck, the DVD/BD is due out shortly after the theater release.

I enjoyed Kizumonogatari Part 1 as an absolute return to base status quo for the series, or to be entirely accurate to the moment that Monogatari Season 2 flashed back too. Yes it wasn't as fun or fast paced, but that's because the characters that brought that energy to the series haven't been introduced yet. These 3 movies establish why the main character Koyomi Araragi starts changing his angsty kid tune and slowly work towards his more lighthearted show counterpart.

Part 1 was a good base layer that had to be set. Partially so Part 2 can spend more time kicking ass. Literally yes, with a large chunk of the movie focusing on Araragi fighting 3 Vampire Hunters to reclaim parts of the vampire who sired him, one Kiss-Shot-Acerola Orion-Heart-Under-Blade. These fights are well directed, well animated and fairly creative. I won't say more on them here since anything specific will ruin the fun of these well done fight scenes.

The other half of the movie is Araragi's budding close friendship with Tsubasa Hanekawa, who is offering moral support and acts as Araragi's human core. Araragi's fight to reclaim his humanity is largely motivated by her, and it's here that we see a hearty return to the editing and pacing style of the Monogatari series. Fast cuts, fun comedic gags and very entertaining dialogue makes this movie feel as fun and energetic as the series. Another returning thing is eye-rolling levels of unnecessary fanservice that help fuel funny moments later in the movie.

All of this molds together to form a very entertaining movie, one that got the groundwork and setting taken care of already to focus on character interaction and fun action.

If you're new to the series, or even if you've seen the whole thing, don't skip this movie. Now, if you'll excuse me, I have a long wait for the final movie to look forward too.

i thougt i would end up hating it, and i also tougt it was only one movie/episode, but i was amazed to find 3 parts, and even more amazed after watching all 3, i fell in love with it all, i have never felt like this after watching any anime or movie/ series, i REALLY recomend to watch this, its art in the purest form, and my heart have awakend after this. its truly amazing, i will watch this again verry soon <3^^

I really enjoyed this movie, but I can´t avoid think that Tekketsu-Hen was better.

Well, the battles are really awesome and the animation is still one of the best things of the univers, but I think the story is very short and I miss the good dialogues of Monogatari.

There are a few things in the second movie that actually confused me. Some of it are character changes which is weird to see since the series has been going for so long.

Mainly with the way that Araragi is carrying himself in the movie feels different. Araragi actually tries really hard to get Tsubasa to leave 'm alone but he does it in a very malicious way which is a side we don't really see from him in the rest of the TV-series. He cares for his friends but he would never just scold them. I get why the scene is in the movie but it just feels weird. The way Araragi grows his limbs back as a vampire was quite unique and different too.

Something that happens a lot in the TV-show is that the rest of the cast tries to make Araragi come across as a weakling since they normally fight for him. Like, he offers to help his friends, he gets beaten up and his friends step in to do the hard work.

The way Tsubasa acts is a lot different too compared to the TV-series, I actually really enjoyed the way she was potraited in the movie though. She looks like a bookwurm but doesn't act like one. In the TV show she acts like a know-it-all but in the movie it's clear that she rather wants to do other stuff besides learning. She's a little bit stalkerish but it really works out in the movie. She already gives clues that she's not happy with how her life is.