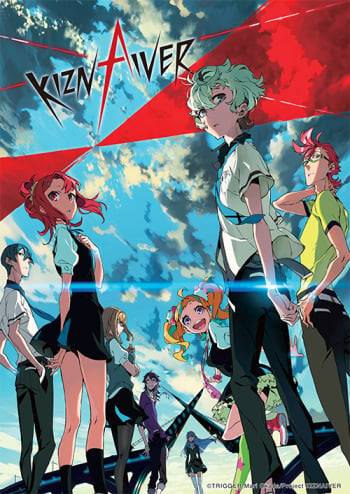 Kiznaiver Episode 1 - Sometimes, a Bond Can Bloom from the First Day Eye Contact Is Made

Agata Katsuhira is a strange young man who doesn't feel pain. One day, he encounters a mysterious young woman named Sonozaki Noriko, who changes his life, as well as the lives of his classmates forever.

Sometimes, a Bond Can Bloom from the First Day Eye Contact Is Made

If You Can Swallow a Bizarre Situation Like This So Easily, Two Buckets of Barium Shouldn't Be a Problem

Depending on How You Look At It, I Think We Could Get Through Anything... Right?

Now That We're All Connected, Let's All Get to Know Each Other Better, 'Kay?

Wahoo, It's a Training Camp! Let's Step in Deer Poop and Have Pillow Fights! Go, Go!

Nothing Good Comes From Being Around All of You

You Knew Very Well That Your Romantic Feelings Might Be Unrequited, Right?

We Have To Contact Each Other And Confirm Our Feelings. Because We're Friends!

If The Kizna System Spread Throughout The World

They both have the theme of descovering what emotions are and what humanity has to offer. They start out closeted with little to no emotion, but as the story progresses they start to discover new and interesting things that they haven't experienced before. They start to learn that there are different emotions like love, happiness, sadness, etc.

Thirty strangers sign up for a shady, one-way bus trip to Nanakimura: a village that urban legend claims is hidden deep in a mountain forest. Some wish to run away from their problems, others hope to make a fresh start, but all soon discover the place of their dreams is actually a nightmare. The village is an abandoned wreck, the surrounding woods seems to be...

The plot and setting are very different, but both these anime involve a number of  various characters who barely know each other who are brought together due to circumstance. The main character is a young male who isn't an especially strong character and mostly just goes along with the others decisions. He has a friend who is always trying to look out for him and keep him out of trouble. Both animes are also original works.

The Lost Village and Kiznaiver have a few things in common, they both star a quirky cast of people that have nothing in common with each other. The characters  also learn to understand each other, and their differences, to unite  together to complete the common goal.

Both of them introduce us in a new world, or the race to make it one, with a group of differents children who are discovering themselves but with the same long distance goal: to connect people, to stop war, to prevent violence.

Kiznaiver is more drastic at the beginning, while Shin Sekai Yori is quite at ease in the introduction. Both of them have a unique art and design.

But if you like the dark themed, psychological and ideal-making-world, you will enjoy both.